Since 1997, female minors have been protected from even a symbolic pinprick to the clitoral hood (female foreskin) even for religious reasons.  Stoning is also banned by law and few, if any, fight over the loss of that religious mandate.  In fact, most people, rightfully so, look down upon female circumcision and stoning.

I ask that you put any biases you may have aside for the moment.  Freedom of religion doesn't give parents the right to amputate any of their child's other body parts in the name of religion.  U.S. law specifically removed the right of parents to alter their daughter's genitals in any way, even for religious beliefs.  Why is it that even parents who pick and choose which tenants of their religion to follow, or may not follow their religion at all, frequently become ultra-religious when it comes to circumcising their sons?  Why is amputating the male foreskin the exception?  Why is a boy not given the same rights to his body and his choice?

Following are Scriptures, articles and experiences from both Christian and Jewish standpoints, all opposing circumcision.

Circumcision and The Bible

It does not make sense to believe that God created all of the wonders of the Universe, and at the same time believe that even though in perfect wisdom He created every mammal with a prepuce, the human male's is disposable or a defect that requires man's correction. 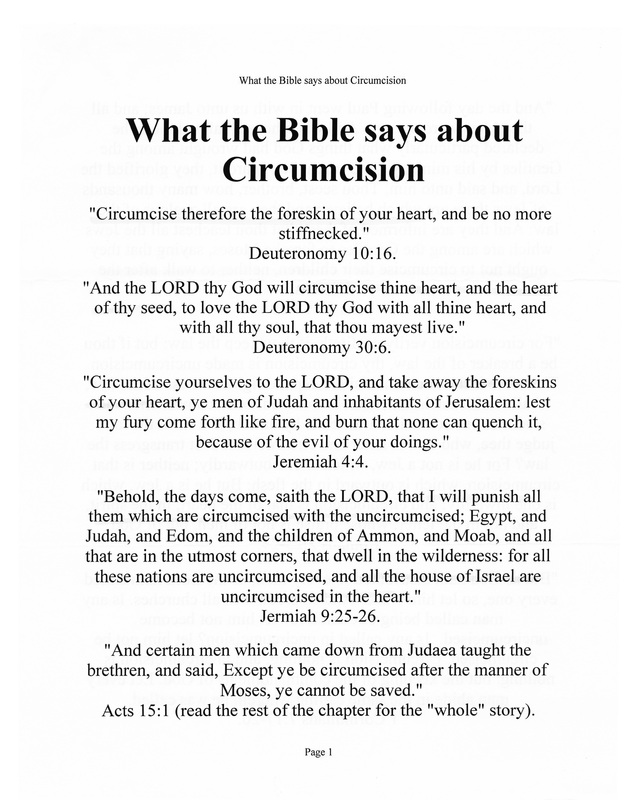 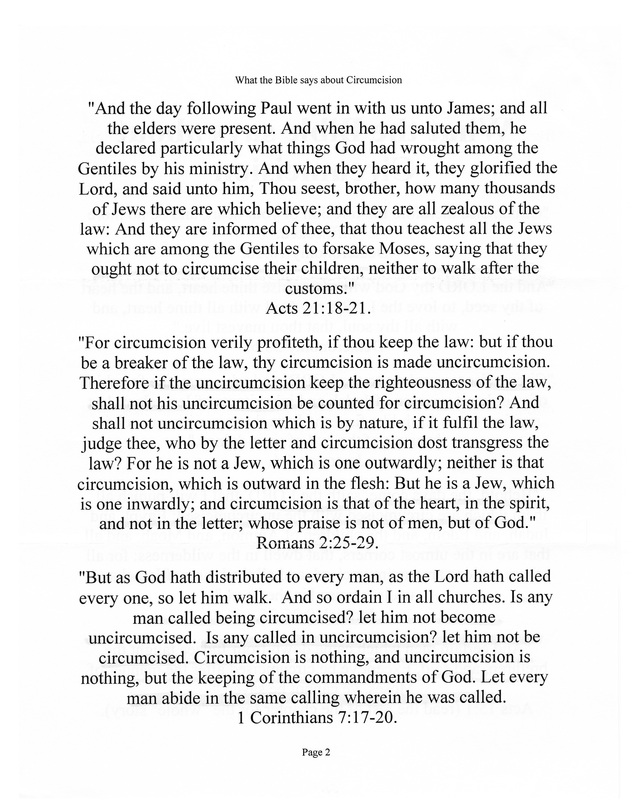 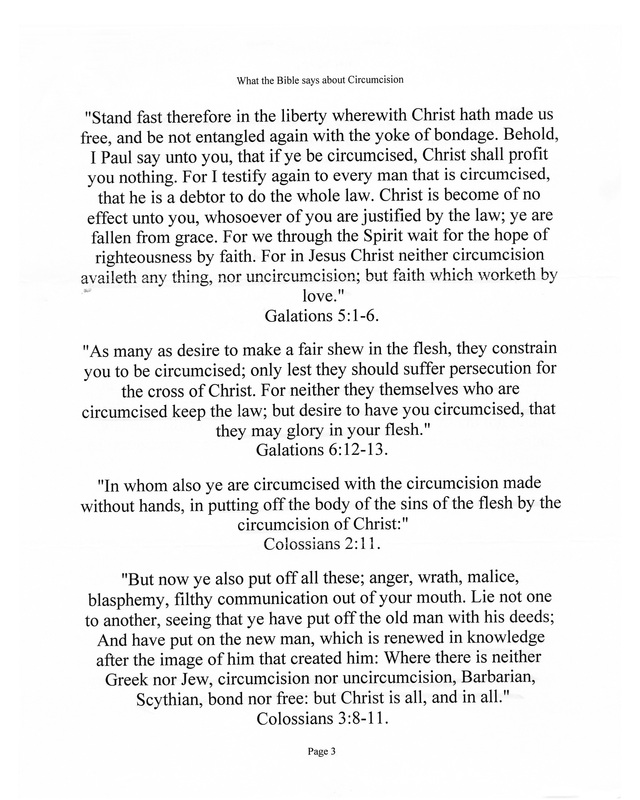 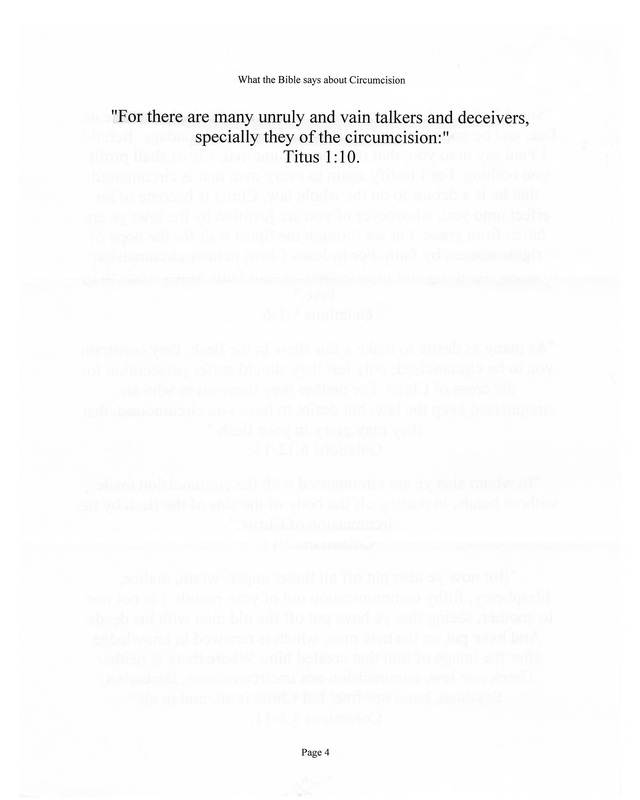 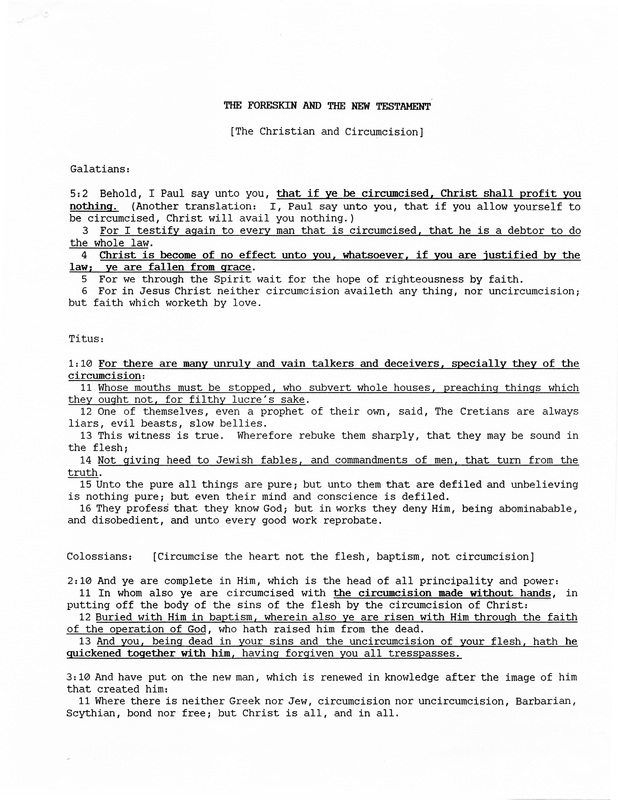 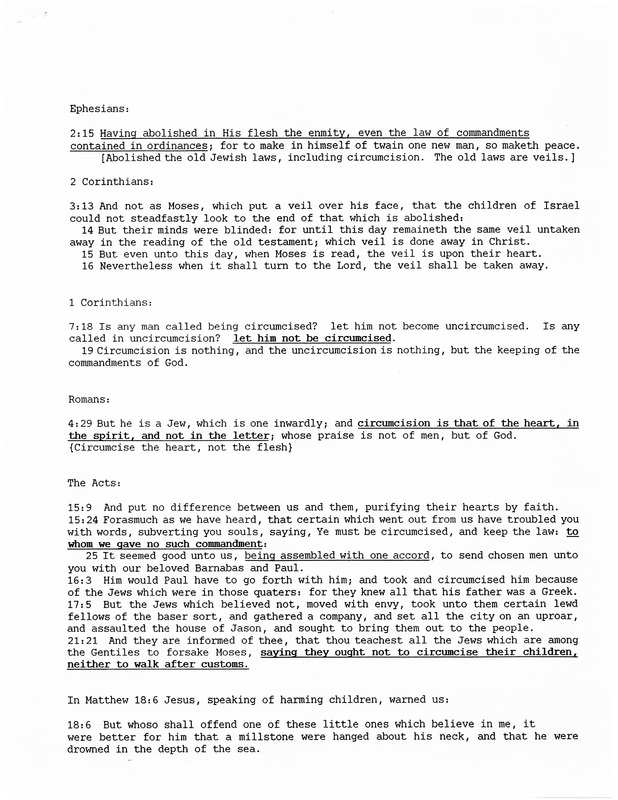 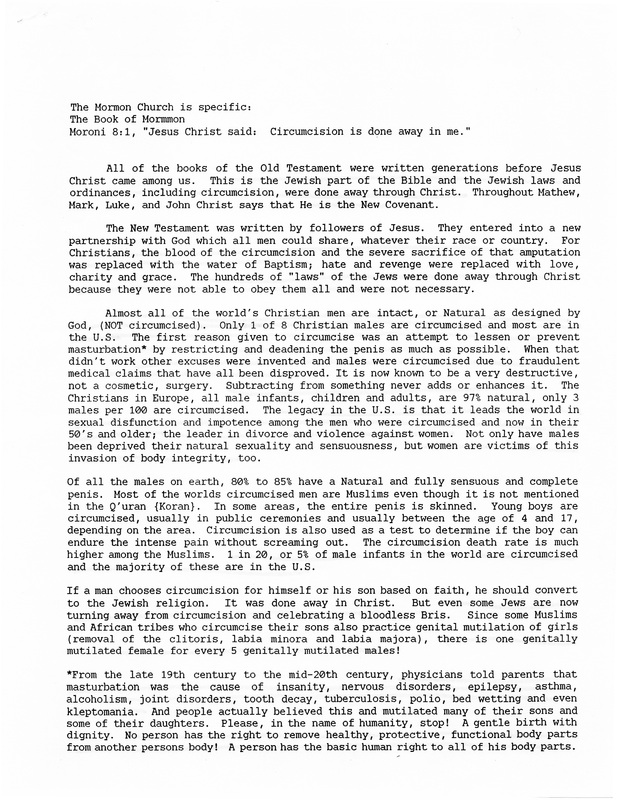 Also see Answers from the Bible to Questions about Circumcision. 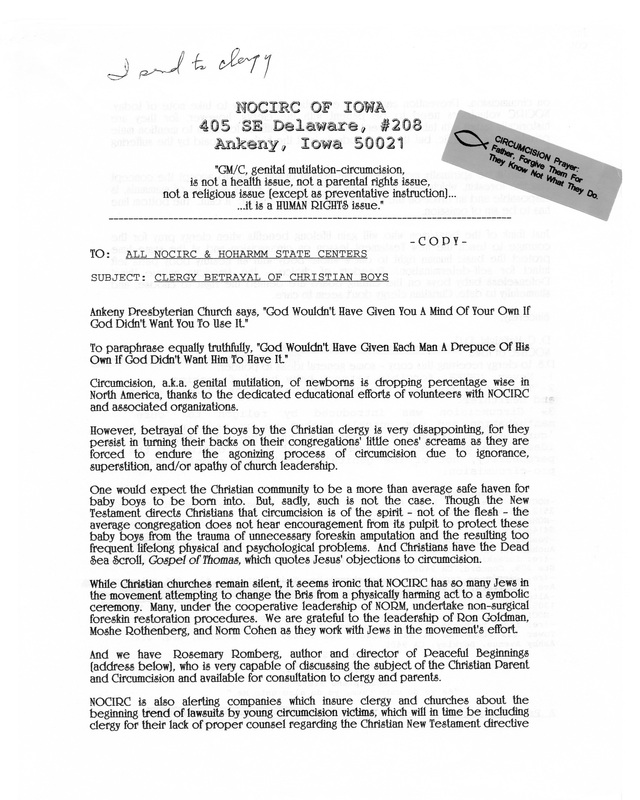 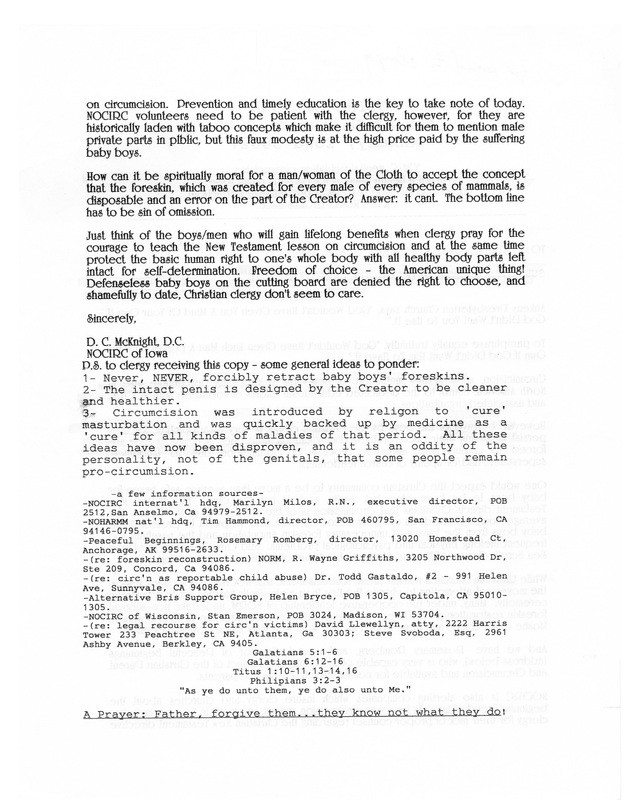 Dave McKnight has passed away.

For more information and resources on Christianity and circumcision, see the following sites ...

From Bris Prep: What Happens During a Bris That You Might Not See ...

Really any bris technique can involve a bris prep where the frenulum and adhesions are freed from the glans in a private room before the public ceremony. Babies who have undergone this need not be presented on a circumcision board. They can be strapped to the circumstraint during the bris prep and then removed, placed on a pillow, and brought into public view once they have stopped crying. Guests do not realize the worst part has already taken place.


From Uncircumcision: A Historical Review of Preputial Restoration ...

The restoration of the prepuce was either done operatively, as it will be described below, or bloodlessly with the help of the so-called Pondus Judaeus. Both methods took advantage of the common way of symbolic circumcision among Jews at that time, the milah. Only the distal part of the foreskin was cut off, leaving a short prepuce that partly covered the glans....

The successful Jewish revolt against Antiochus IV in 141 BC led to the establishment of the Hasmonean or Maccabean reign in Judea, making uncircumcision unnecessary for the following period. Later in 63 BC, the Romans took over the supreme authority and, together with the rise of Christianity, a new desire for hiding the state of circumcision appeared. Obviously, many Jews who converted to the Christian religion underwent uncircumcision to emphasize the break with their old religion and to be fully accepted in the Christian community. The Apostle Paul condemned this practice by saying: "Is any called being circumcised? Let him not be uncircumcised. Is any called being uncircumcised, let him not be circumcised" (I Corinthians 7:18).

The Roman tolerance toward circumcision among Jews came to an end with the hellenophilic emperor Hadrian, who was proclaimed emperor in 117 AD and once again urged a law forbidding circumcision. The Talmud gives proof that during his reign many of the circumcised turned to uncircumcision for obvious reasons. This habit was rejected by orthodox Jews and, therefore, after the law against circumcision was loosened again about 140 AD, they introduced radical circumcision to the Jewish community, the so-called periah. It left the glans totally uncovered and made it almost impossible to perform the above-mentioned methods of restoring the prepuce.


From In Israel, some rebel against circumcision ...

"The phenomenon is growing, I have no doubt," said Ronit Tamir, who founded a support group for families who have chosen not to circumcise their sons.

"When we started the group 12 years ago we had to work hard to find 40 families ... They were keeping it secret and we had to promise them we'd keep it secret," she said. "Then, we'd get one or two phone calls a month. Nowadays I get dozens of emails and phone calls a month, hundreds a year."

"There is definitely a growing number of Jewish families in the U.S. who are choosing not to circumcise," said Florida-based Rebecca Wald. In 2010 she started a website to connect parents who are unsure about what to do.

"Since then, in phone calls, emails, and on social networking sites I have connected with hundreds of Jewish people in the U.S. who question circumcision." she said in an email interview. "Many of them have intact (uncircumcised) sons or plan to leave future sons intact."

Site owner Ephrem Mogberg said this clearly demonstrates "an ongoing paradigm shift in the Jewish community's perception of the value and relevance of circumcision in this modern day and age," 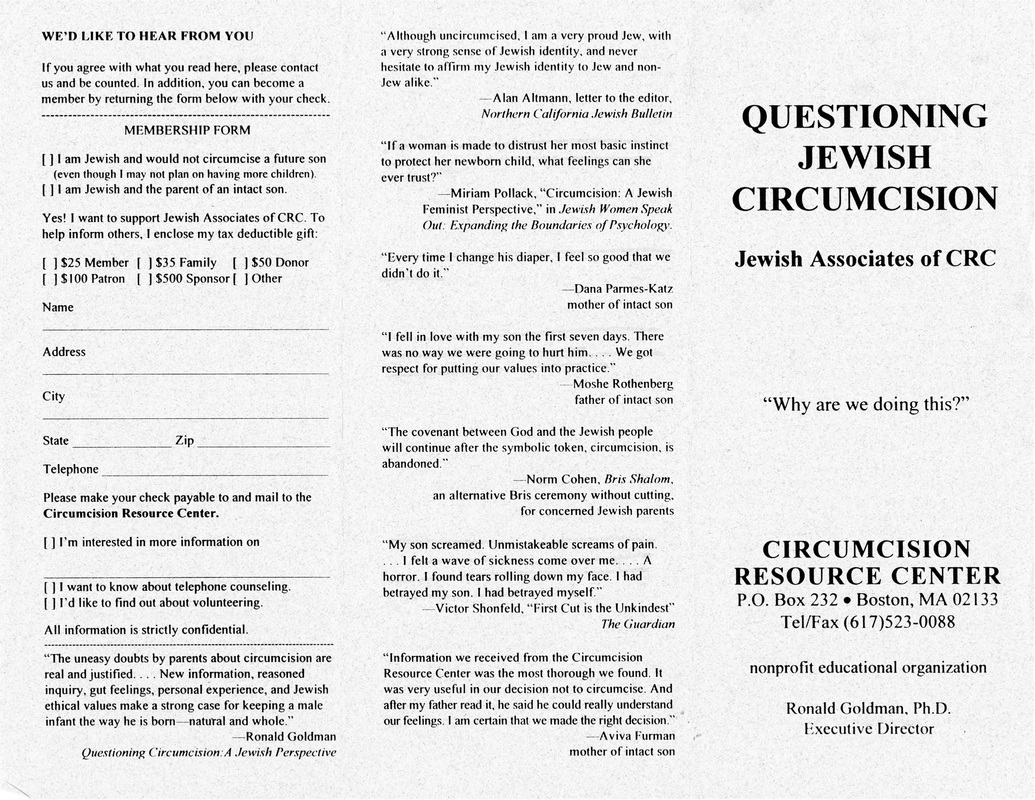 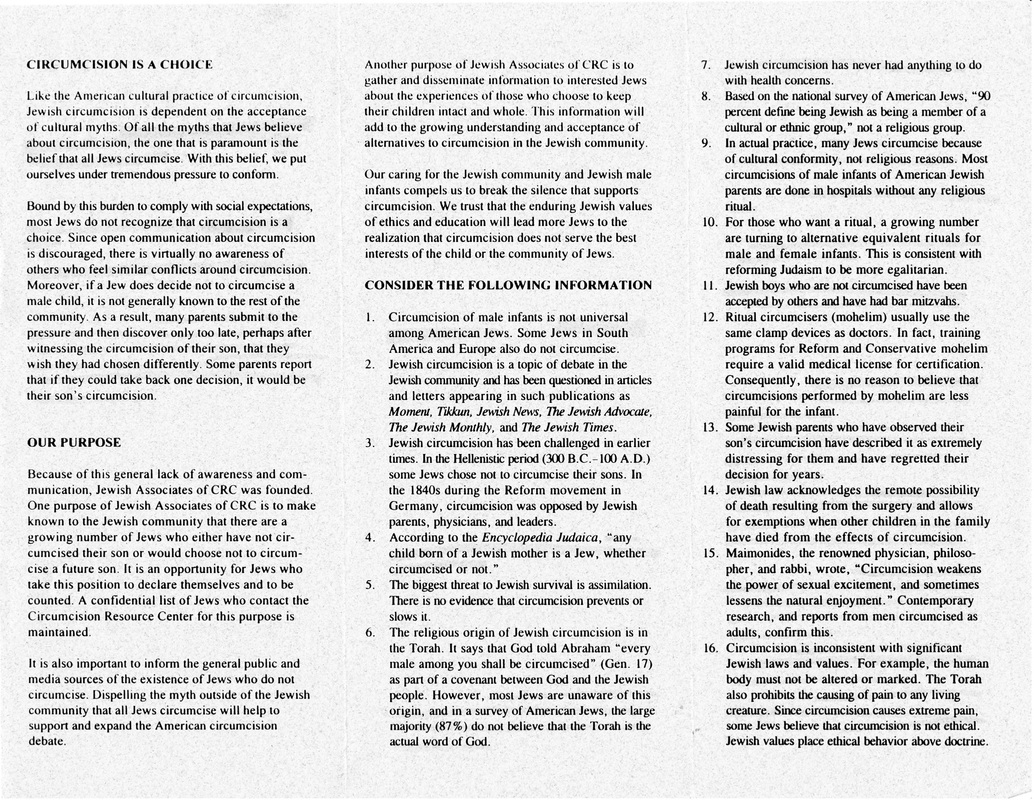 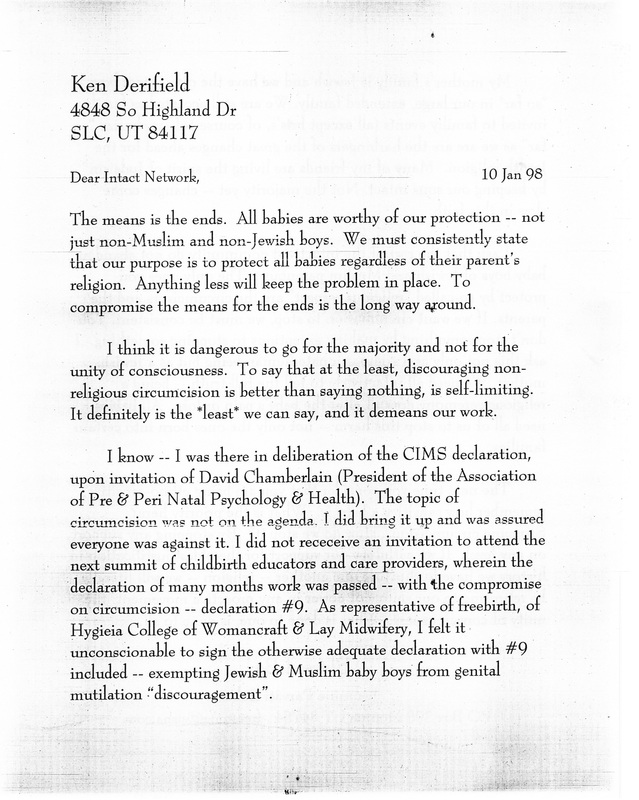 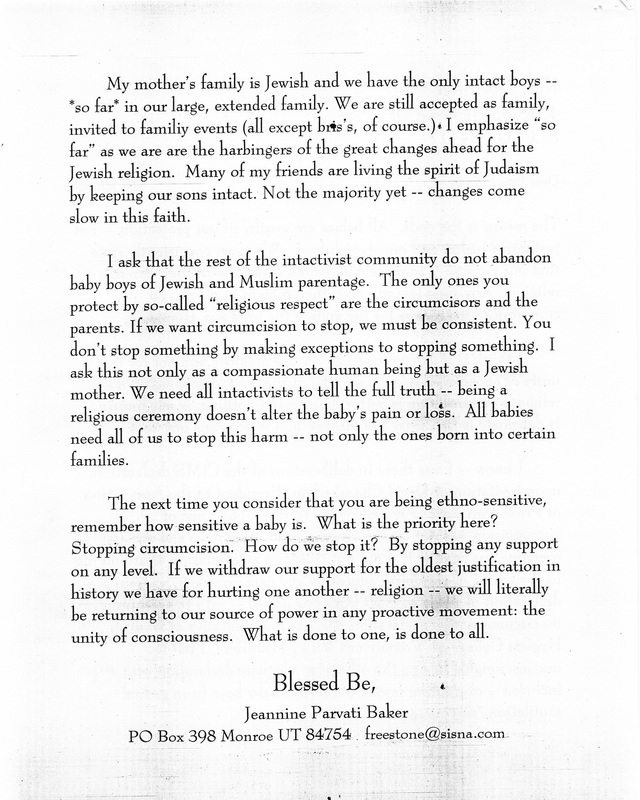 Ken Derifield has moved and Jennine Parvati Baker has passed away. 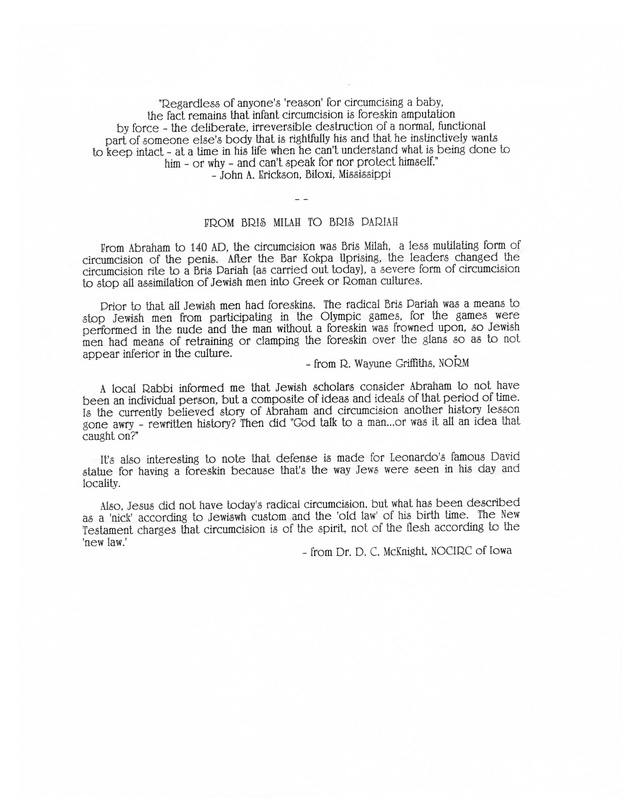 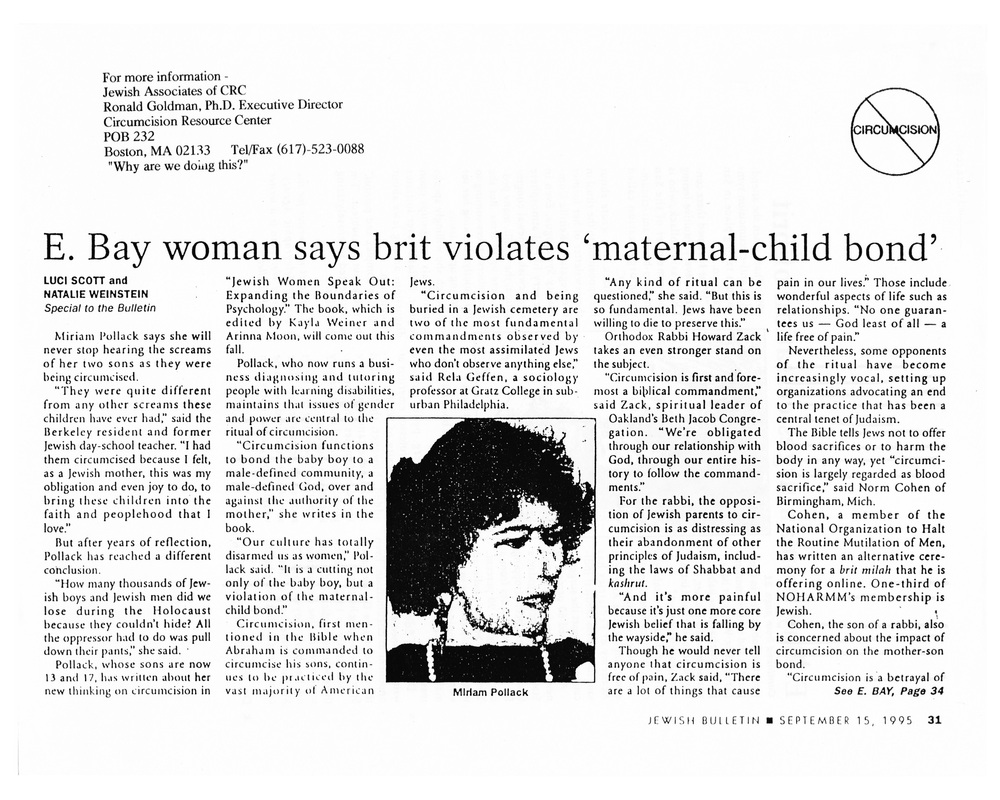 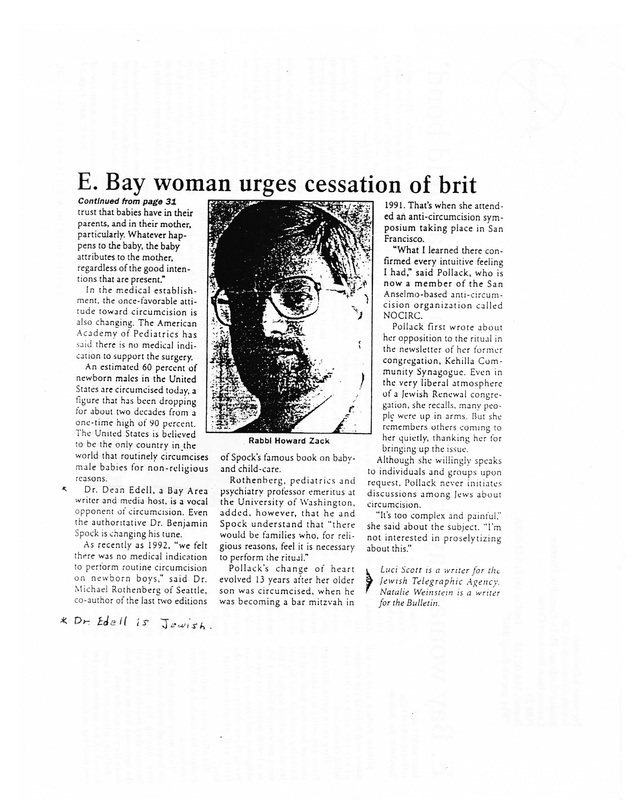 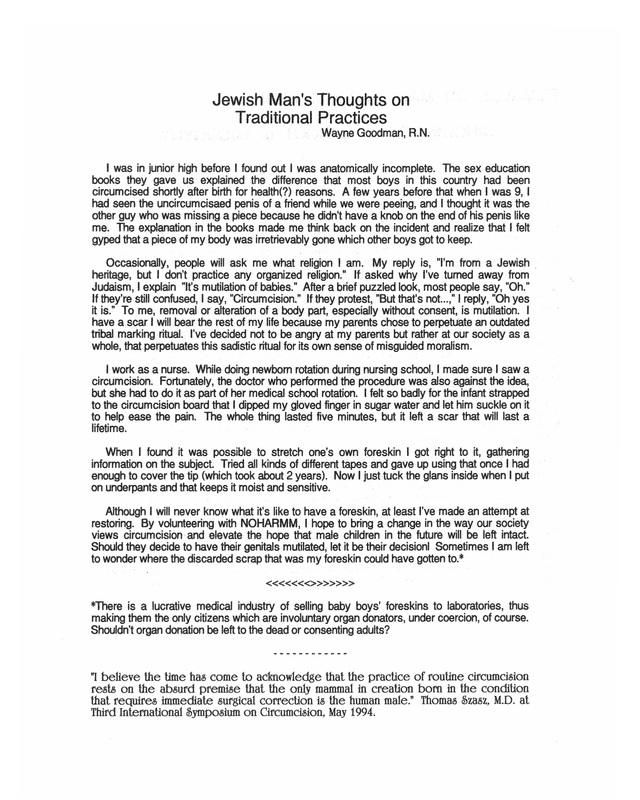 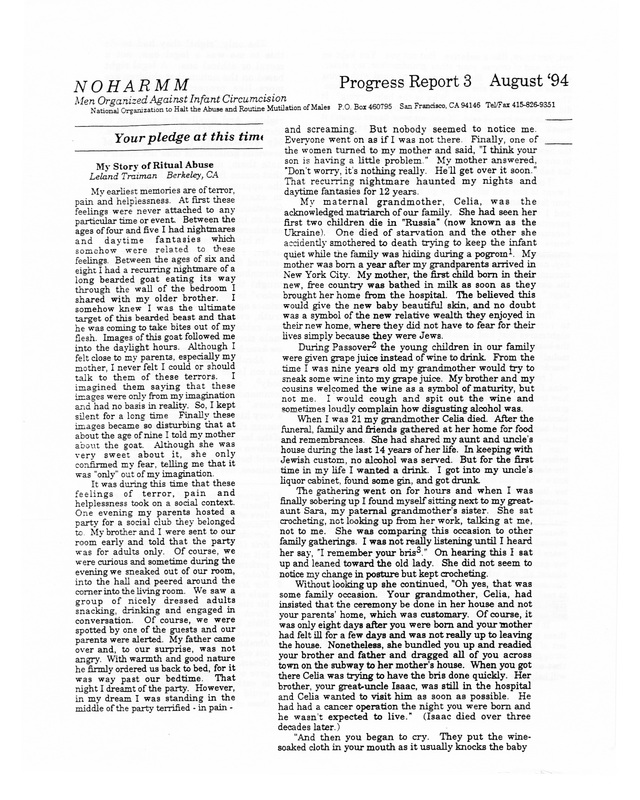 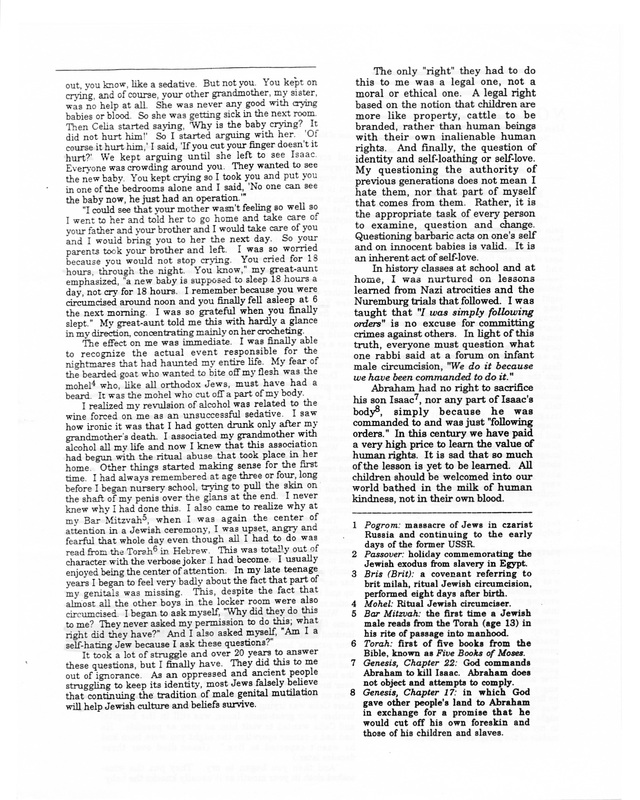 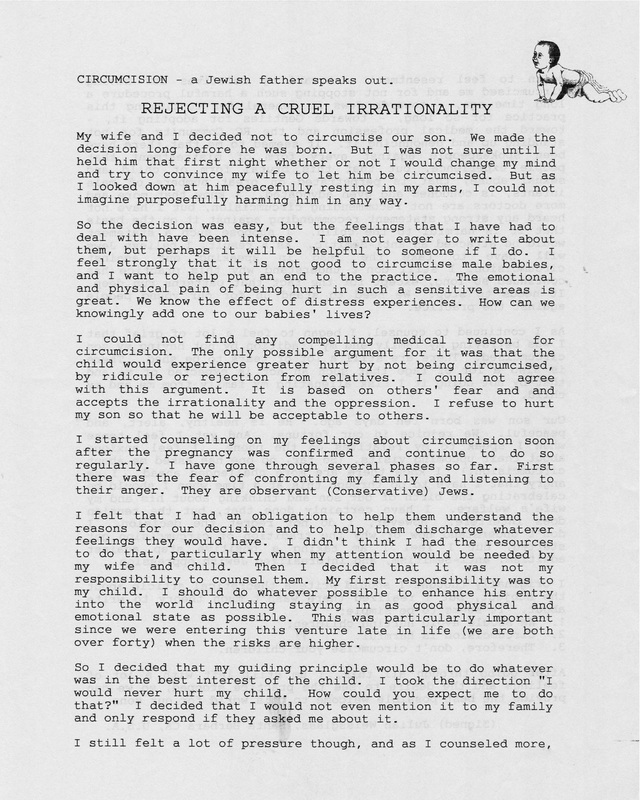 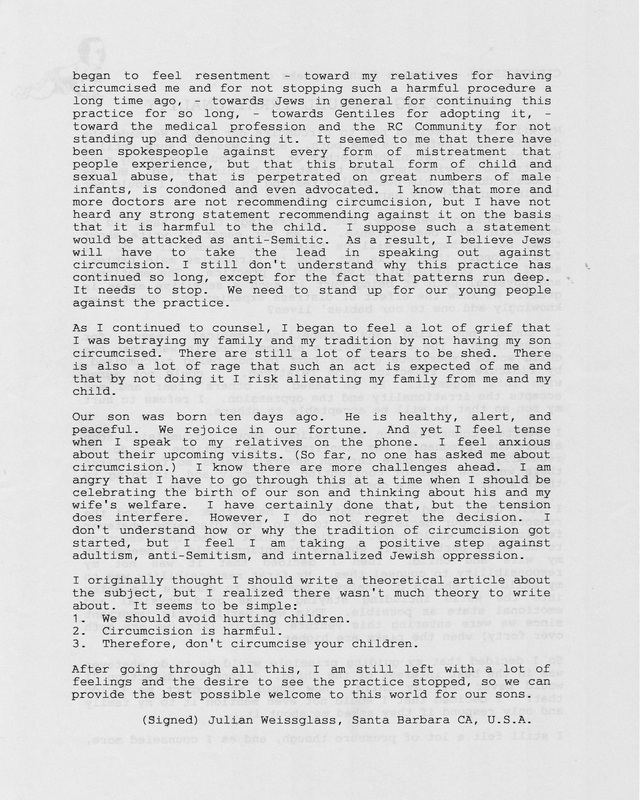 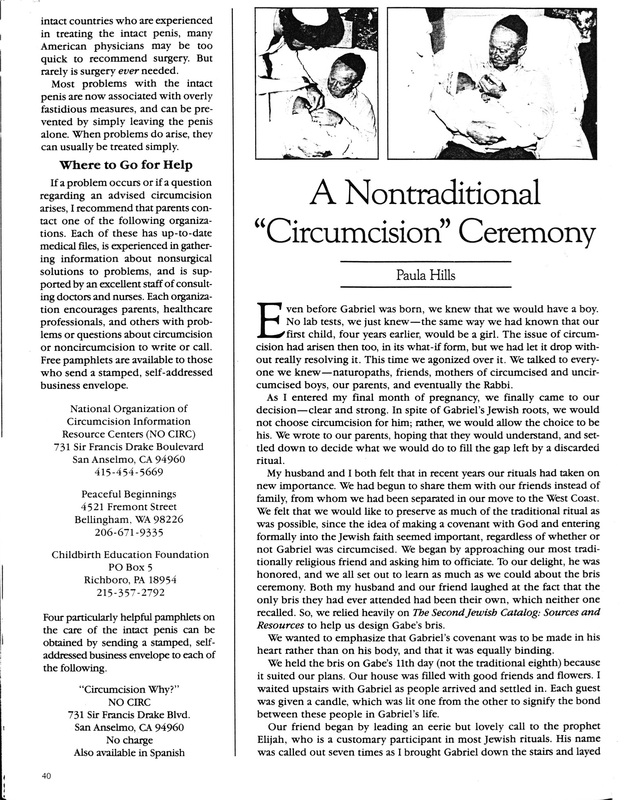 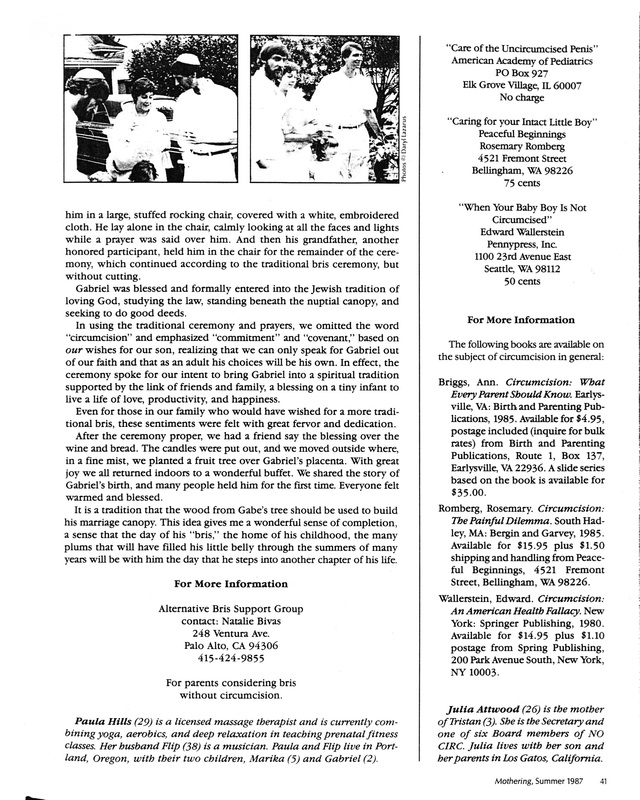 The article, A Nontraditional "Circumcision" Ceremony, contains part of a second article.  Both articles are shown in their entirety at the page, Natural Penis Care.

A child is born!

The boy is bathed, his life-line, no longer needed, cut.  He is wrapped in swaddling clothes and handed to the mothers breast, where again, miracle of miracles, she produces, with no thought or preconceived idea, the perfect food, that issues then, into his perfect sucking mouth.

Oh this child.  He is the hope for our future.  The dreams of our ancestors.  The gift of the next generation.  He will carry our name forward.  Our history.  He will fulfill on this earth, our covenant with god, that we be fruitful.  That we multiply on the earth.

And for our part, we promise to care for him.  To nurture and nourish.  To teach and grow.  To show him great things, and bring him great joy, that his happiness exceed our own.

When our precious, perfect boy-child, is but a week old.  First.  We will mutilate him.  And we will do it in the name of god.