So many people think a circumcised penis is healthier, cleaner and easier to take care of.  Nothing could be further from the truth.  Most of the world's men have natural penises, and problems with their foreskins are virtually unheard of, even in old age.

Think about this.  You have a baby.  Which is easier?

From Protect Your Uncircumcised Son:  Expert Medical Advice for Parents ...
I often receive calls from distraught parents who say that a doctor insists that their little boy needs to be circumcised because there is something wrong. When they bring their son into my office, I almost always find that there's nothing wrong with the child's penis. Occasionally there's a slight infection, but that can be quickly cleared up with an antibiotic cream. In all my years of practice, I've never had a patient who had to be circumcised for medical reasons.


From British Journal of Urology - Variability in penile appearance and penile ﬁndings:  a prospective study ...
Circumcised boys under 3 years of age were significantly more likely to have a partially or completely covered glans, a reddened meatus, balanitis, or trapped epithelial debris, and less likely to have a fully exposed glans than were circumcised boys of 3 years or older.  Among the 238 boys under 3 years, those circumcised were significantly more likely to have non-cosmetic problems, including coronal adhesions, trapped epithelial debris, a reddened meatus, preputial stenosis (phimosis) and balanitis, than were boys with a foreskin.

The circumcised penis requires more care than the intact penis during the first 3 years of life.  Parents should be instructed to retract and clean any skin covering the glans in circumcised boys, to prevent adhesions forming and debris from accumulating.  Penile inflammation (balanitis) may be more common in circumcised boys; preputial stenosis (phimosis) affects circumcised and intact boys with equal frequency.  The revision of circumcision for purely cosmetic reasons should be discouraged on both medical and ethical grounds.


In case you worry it will be a problem for your son to keep clean, WRONG!  It only takes seconds to retract and rub/rinse clean, and most boys and men enjoy it.  Seriously, what male doesn't like to handle himself and retracting the foreskin is pleasurable!  If soap is used, it should not be perfumed or anti-bacterial, as it can throw off the pH balance which can cause problems; the same goes for the female genitals.  Don't believe any of the silly comments people sometimes make about using Q-tips and scrub brushes.  It's easier for a male to clean his genitals than a female to properly clean all her cracks and crevices, but we don't advocate cutting hers off for hygienic purposes.

To advocate circumcision for penile hygiene makes as much sense as pulling teeth to promote dental hygiene.  Dental hygiene does take time and effort, and without teeth in the first place, you wouldn't get cavities or the myriad of other dental problems that frequently lead to tooth loss.  Some people have so many problems with their teeth that they are glad to get dentures.  I must say, it was much easier teaching my son to wash his complete penis than to brush his teeth.  Maybe routine tooth removal is a good thing.  NO!  Sounds insane, doesn't it?  The removal of body parts does not equal hygiene.  Anyone, circumcised or not, will get smelly if they do not practice good hygiene.

Here is more on the subject. 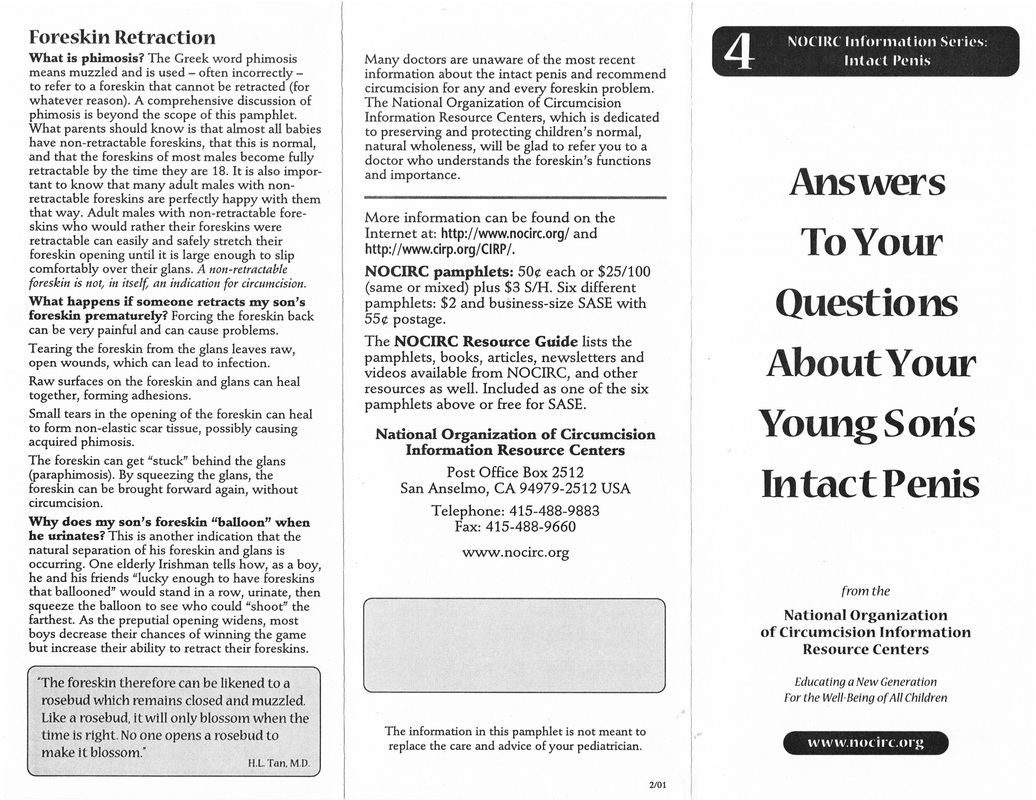 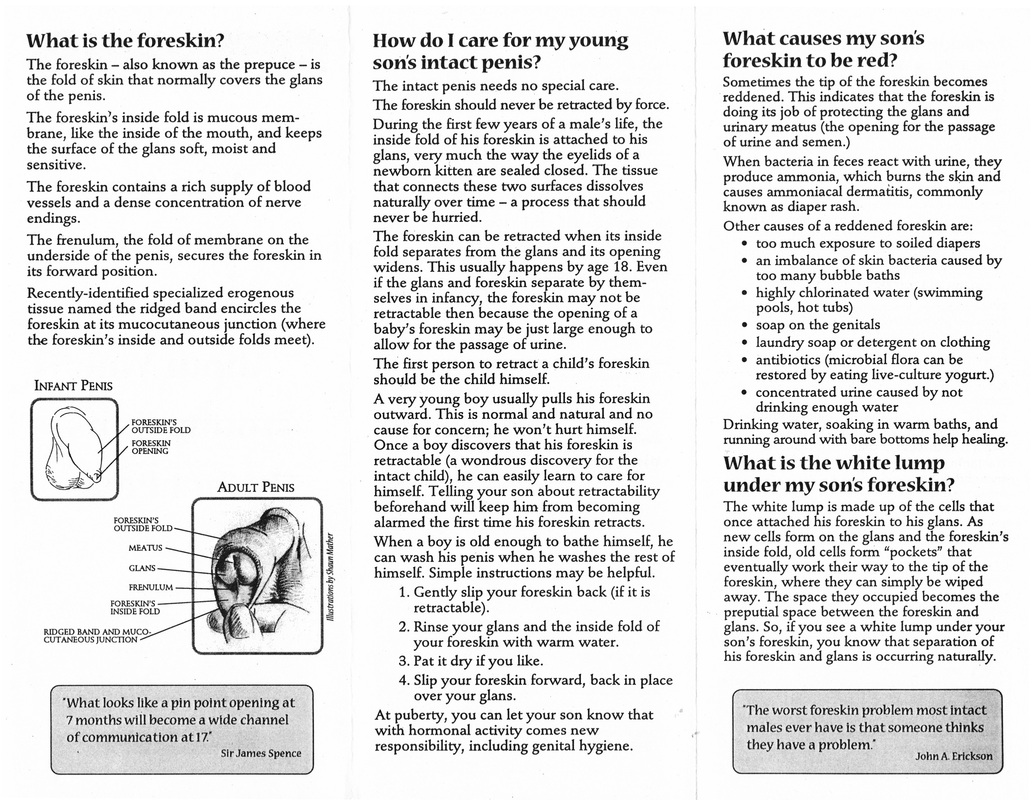 Answers To Your Questions About Your Young Son's Intact Penis 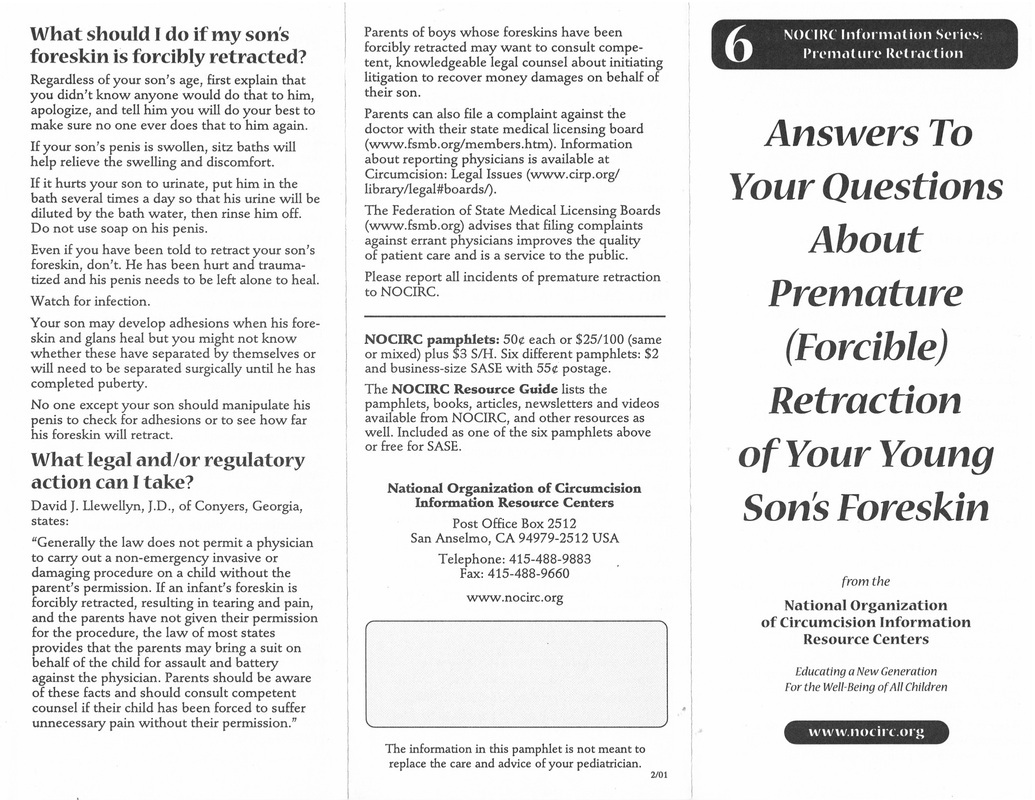 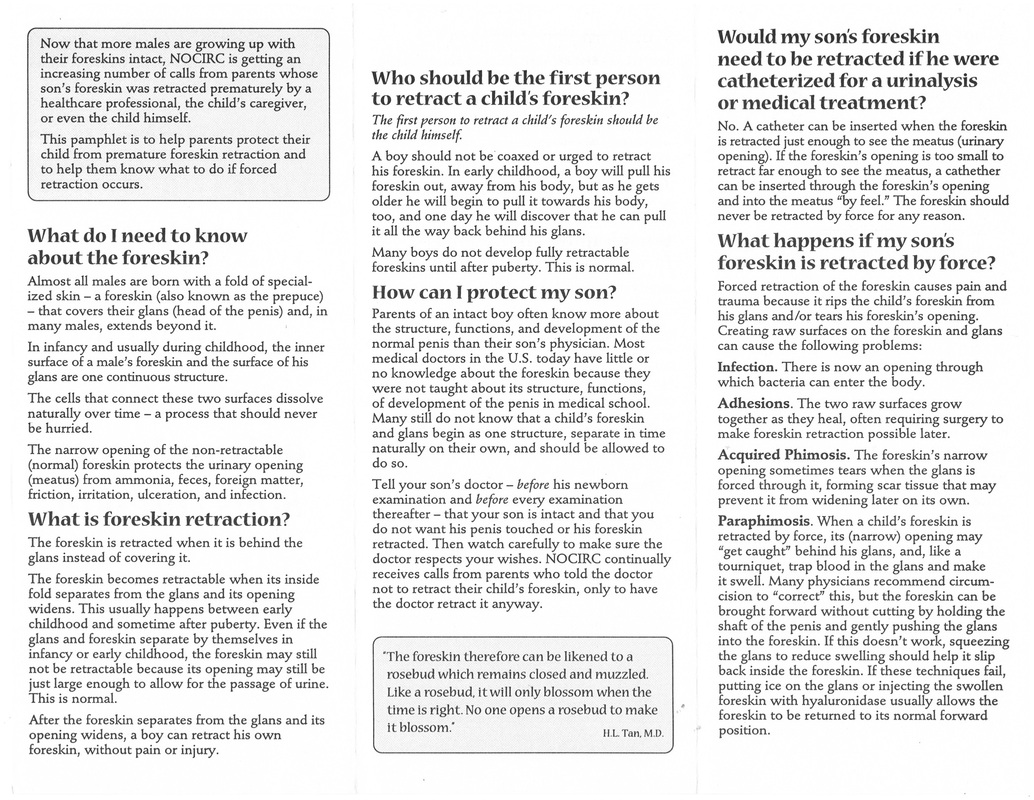 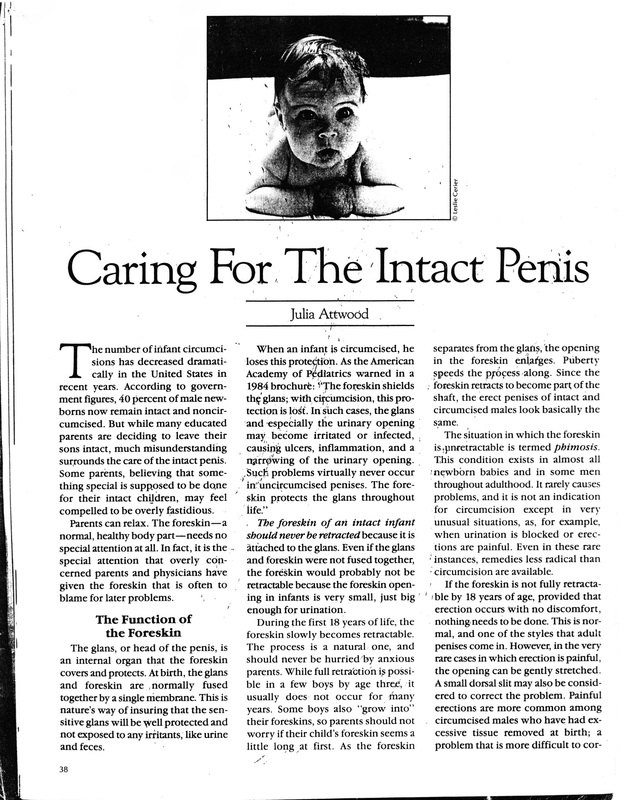 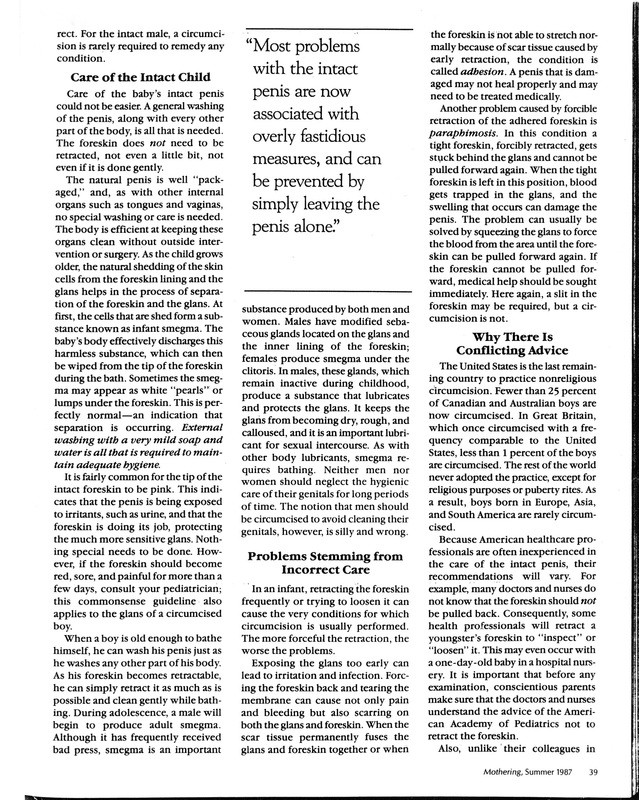 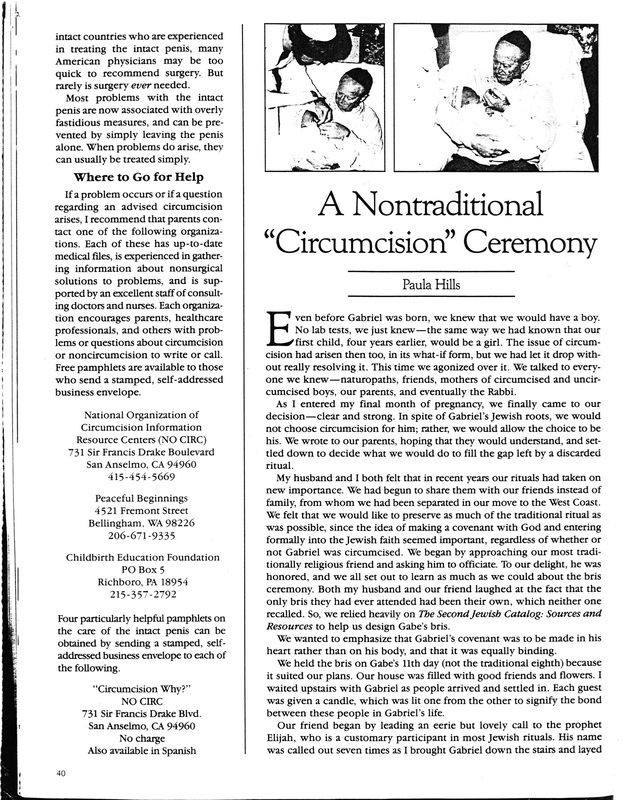 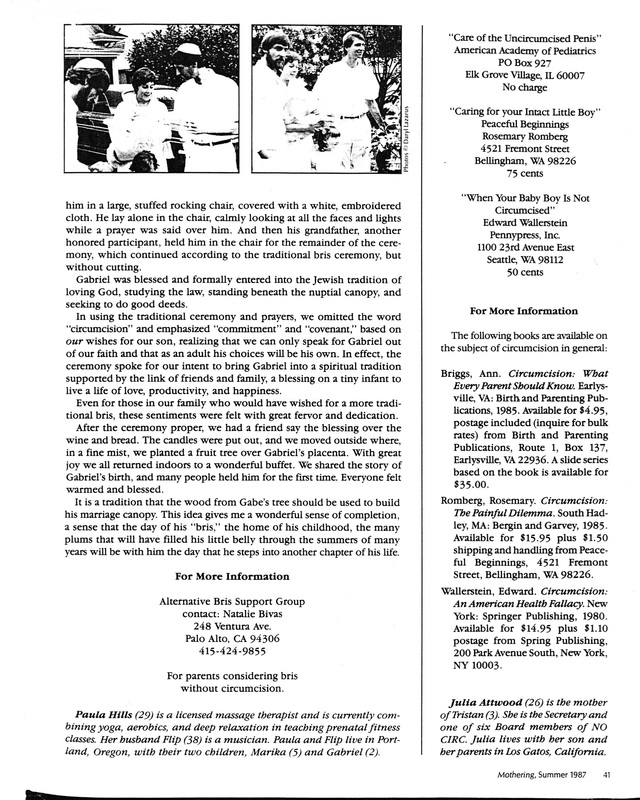 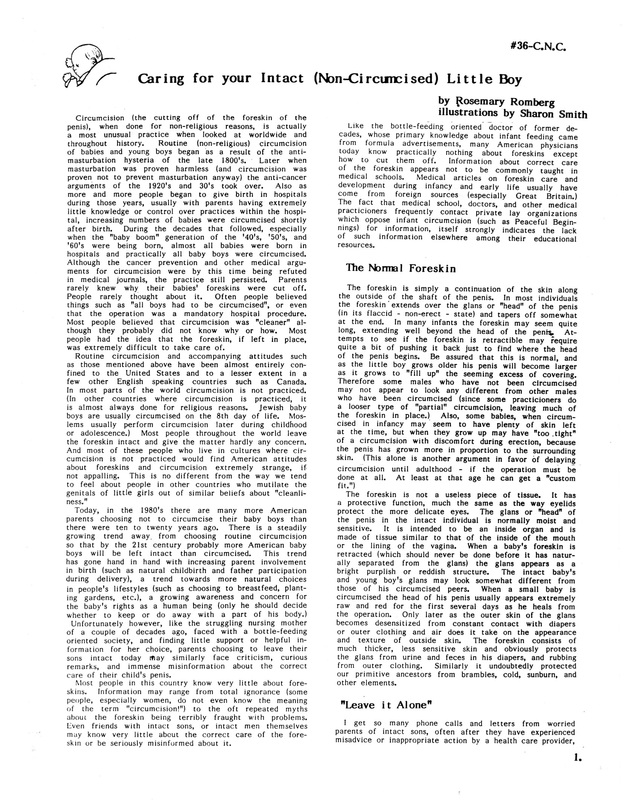 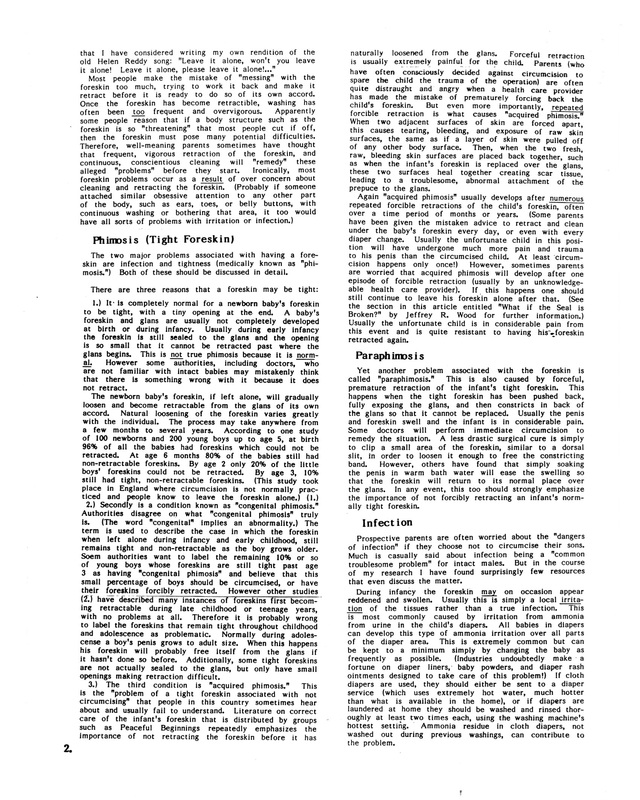 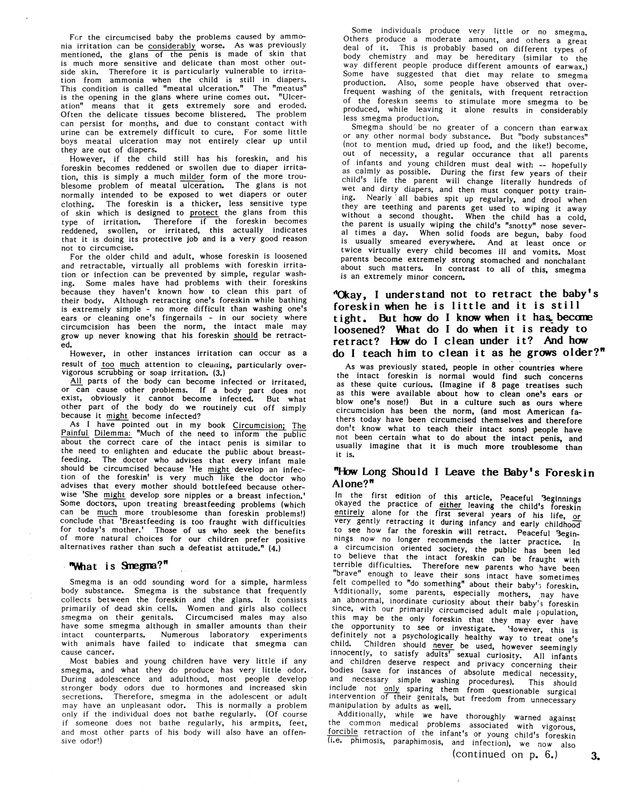 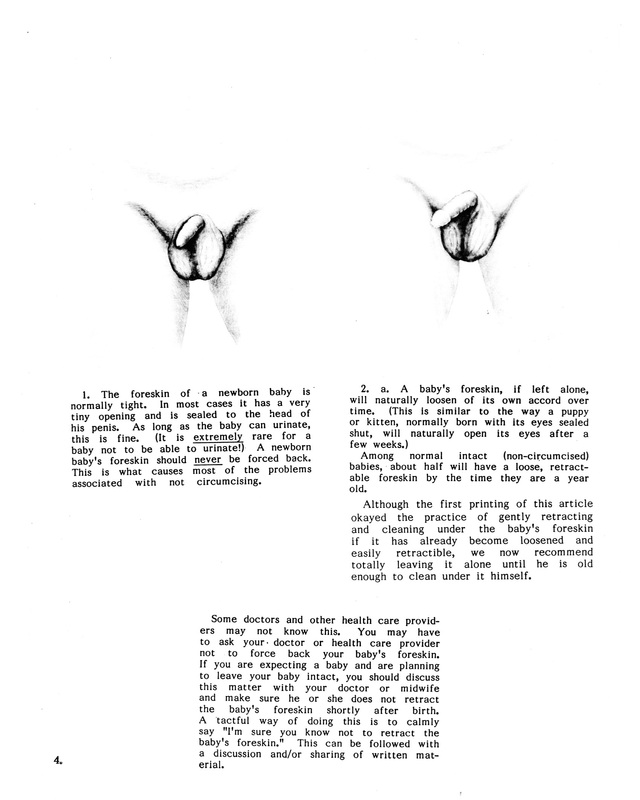 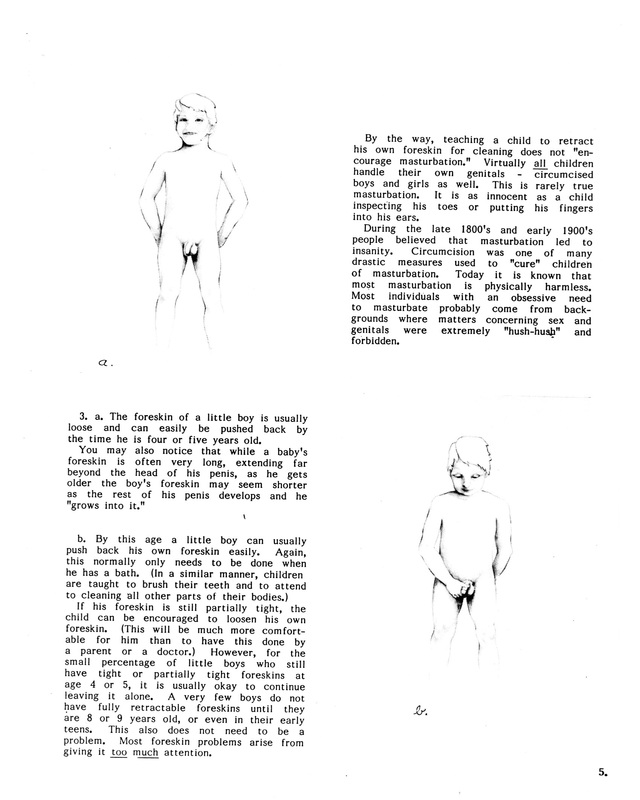 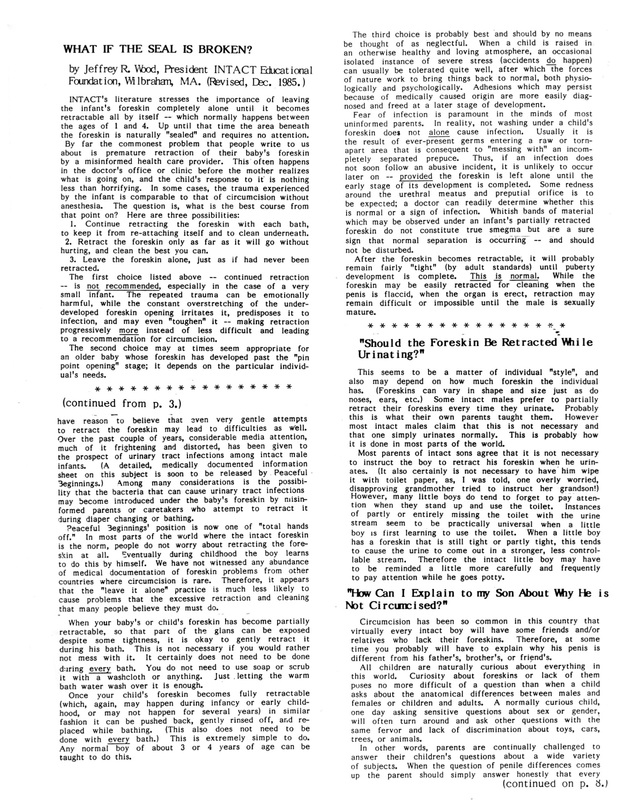 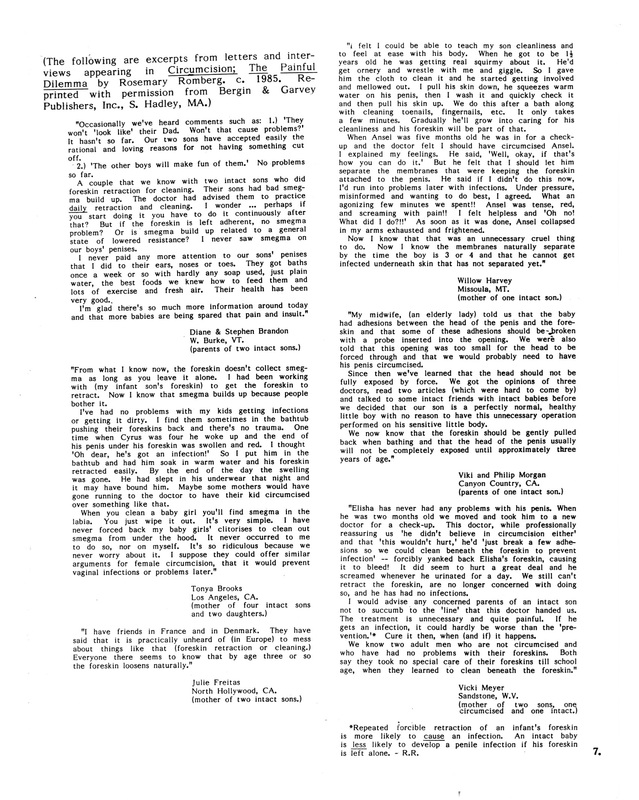 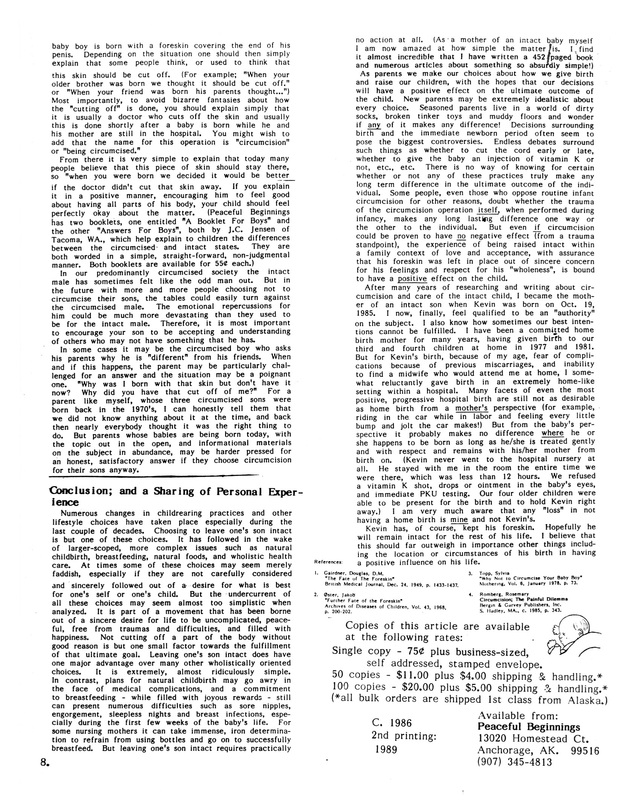 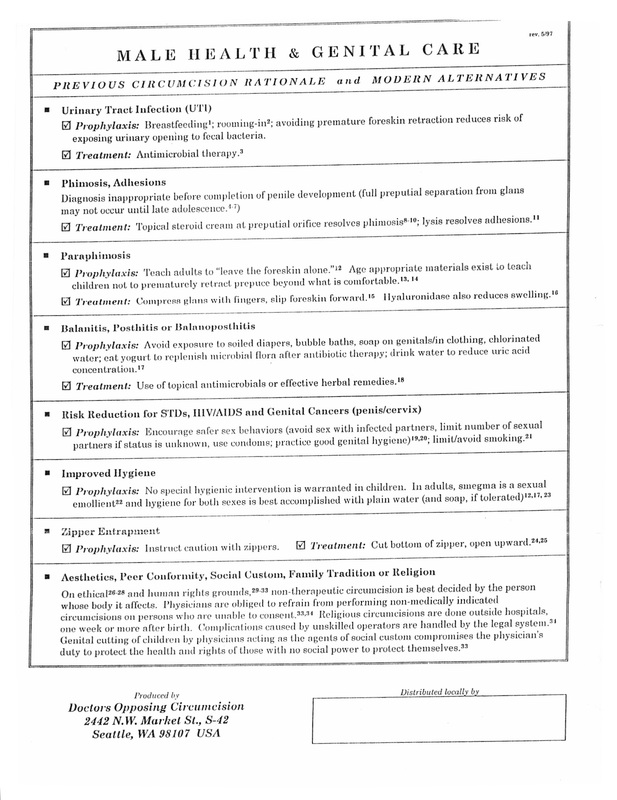 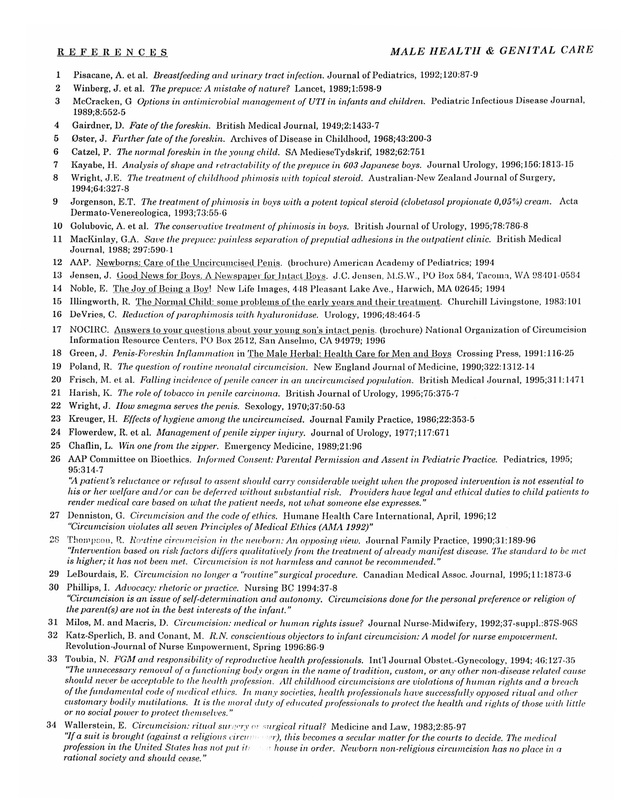 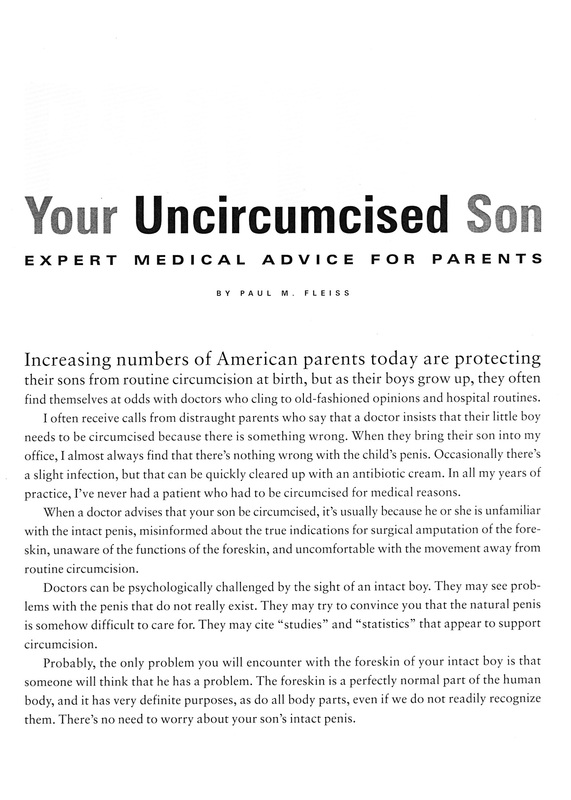 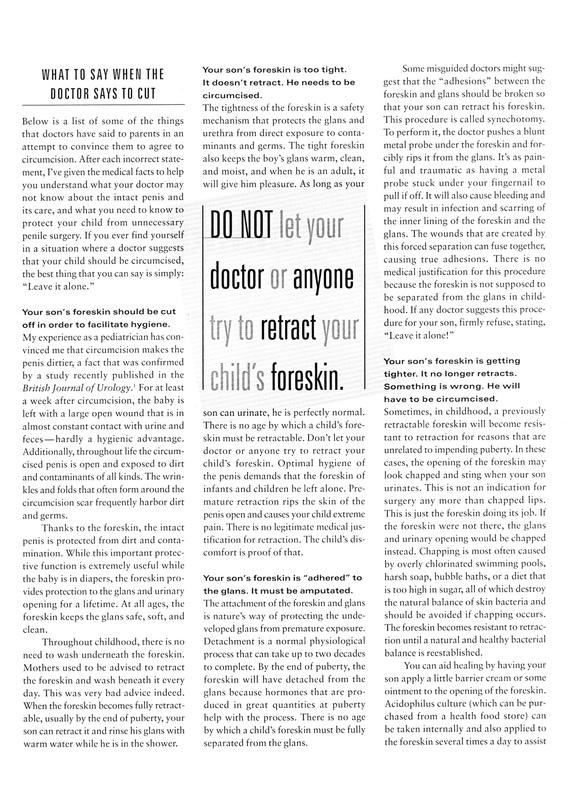 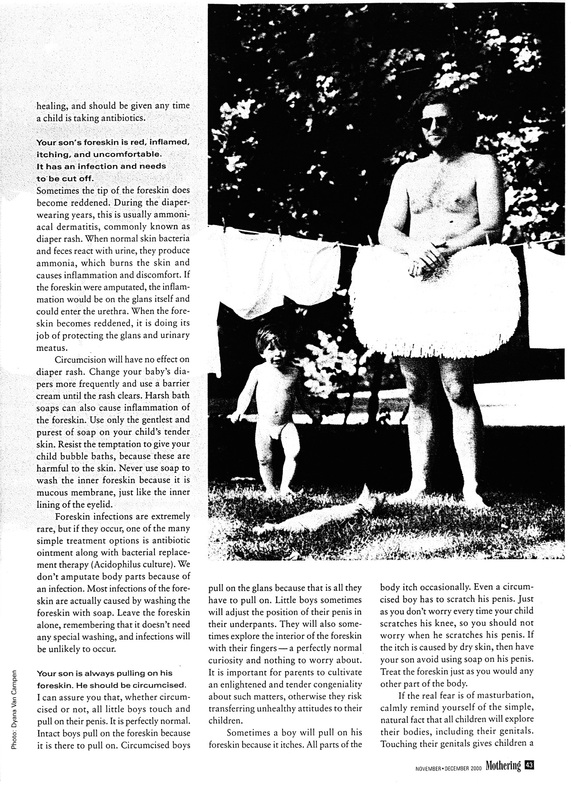 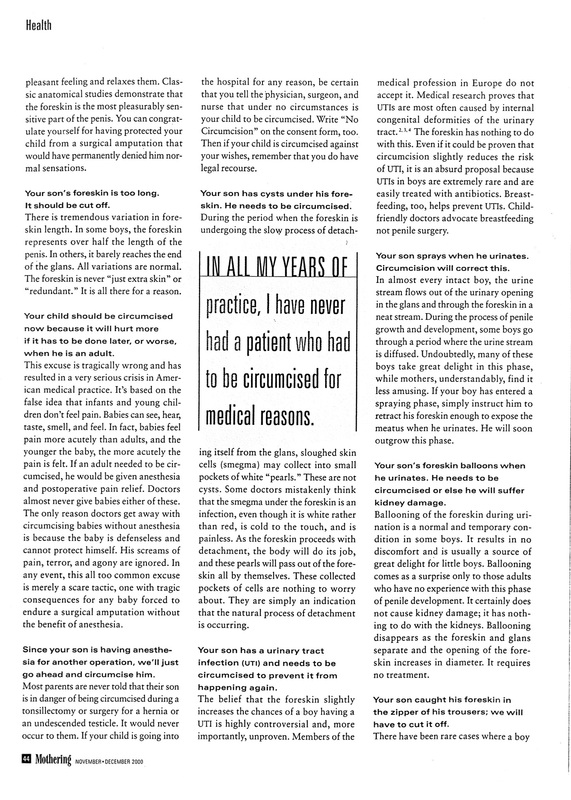 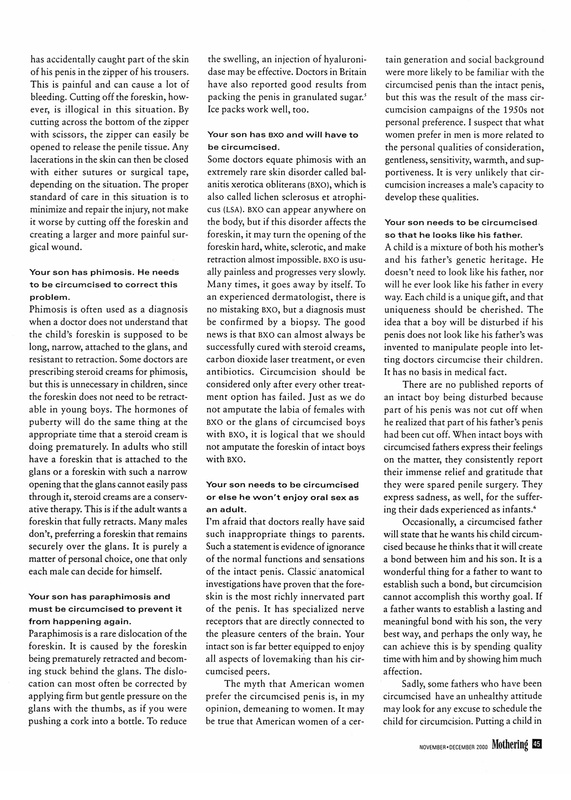 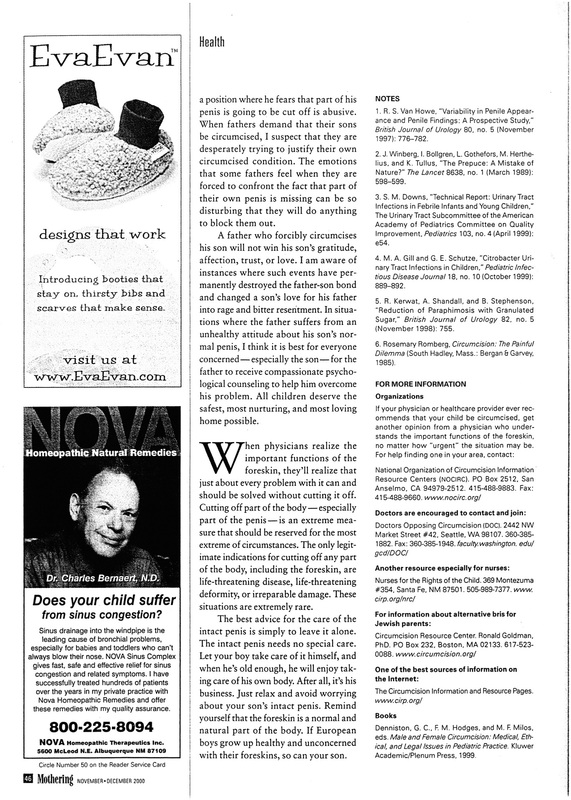 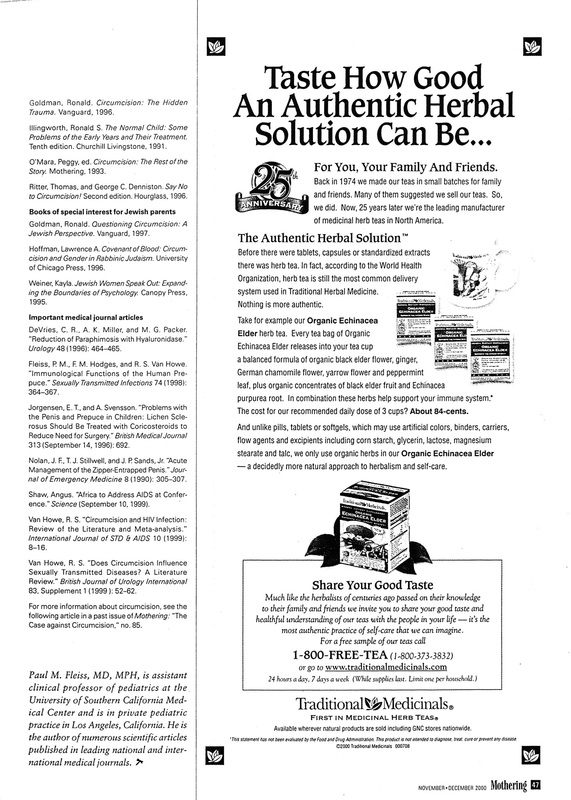 More on hygiene can be found on the page, Medical Fraud.
Also see A closer look at the care of the intact penis and proper hygiene as he grows older.