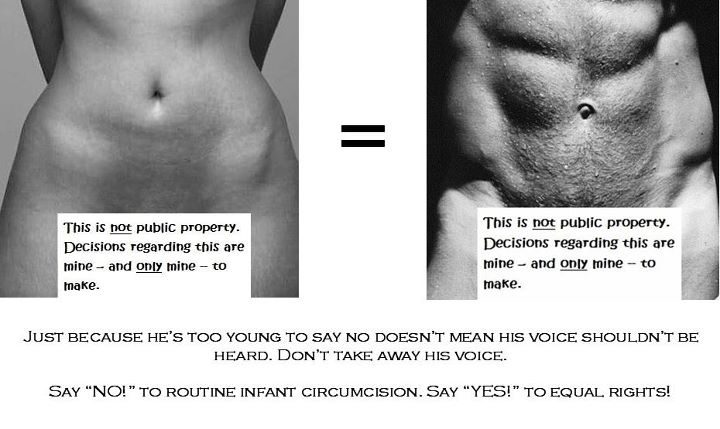 Image by Jennifer K. Myrna, posted at The WHOLE Network
It's always easier to see the error in someone else's ways.  The same is true when it comes to female and male circumcision.  Many people who rightfully condemn FGM (female genital mutilation) often defend MGM (male genital mutilation), not realizing how much alike they really are.  They think all FGM is the worst form, not realizing most frequently it is "only" removing the clitoral hood, the female foreskin.  They also do not realize that in the United States, insurance companies covered female circumcision until the 1970s!  It was only made illegal to perform on minors in the United States in 1997.  Females under the age of 18 are now protected in the United States from even a symbolic pinprick of the clitoral hood for religious reasons.  Under the 14th Amendment, boys should share the same protection, yet their mutilations are still defended as a "parent's right."  When a woman speaks out against her body being violated, she is applauded; when a man speaks out against his body being violated, he's ridiculed and silenced.  Not only that, but it is considered acceptable to ridicule him if his penis has not been mutilated.  If this is not discrimination, I do not know what is.

I have made a few quotes from the images of documents, quotes that are frequently used in reference to male circumcision in this country.  The only difference?  They are by or are referring to women.

From History of Female Circumcision in the United States ...

As late as the early 1980s in the United States, some avenues of popular media were promoting female circumcision as a good thing - cosmetic genital surgery that would enhance a woman's desirability and sexuality. Many of the same myths we hear in the beginning of the 21st century about male circumcision were commonly assumed to be true for female circumcision in the 20th century.


From Male and Female Infant Circumcision: Which One is Worse? ...

Circumcision, male or female, is always abuse, genital mutilation, and a gross violation of basic human rights, when it is conducted on healthy, non-consenting individuals.

Whether it is performed by professional or amateur, in the hospital or in the bush, on babies, children or adults, with pain killers or without, with a glass shard or a scalpel, whether it removes a "tiny flap of skin," or a substantial chunk of flesh, for "potential medical benefits" or for "religious reasons" is irrelevant.


From Circumcision is Child Abuse:  A Picture Essay ...

It is a glaringly obvious inconsistency to defend the forced genital cutting of one sex, but condemn it in the other ... The fact of the matter is that neither the allegations of "medical benefits" nor the production of numerous "studies" would never be enough to justify the forced genital cutting of girls. Why this double-standard when it comes to the circumcision of boys? There are better, more effective, less invasive ways to treat and prevent disease. Instead of investigating these, instead of seeking to make the practice of forcibly cutting off part of a healthy, non-consenting boy's penis obsolete, why are we spending millions of dollars on "studies" to find ways to make the practice a requirement?


The ritual nick suggested by some pediatricians is not medically harmful and is much less extensive than routine newborn male genital cutting.

"We retracted the policy because it is important that the world health community understands the AAP is totally opposed to all forms of female genital cutting, both here in the U.S. and anywhere else in the world."


From The AAP: culturally blind or morally bankrupt? ...

This is just another example of the cultural blinders we all wear, including well-educated people like physicians: a nick or a pinprick that would not have removed any tissue nor caused any damage is just too terrible to do to a baby girl, but removing all of the foreskin, ridged band, dartos muscle and frenulum from a baby boy is just fine?

The US seems to assume that just because most Americans, regardless of religion, are circumcised as infants, other countries should be persuaded to do the same.  What is ironic is that this push for male circumcision is being paralleled by US support for campaigns against the female equivalent practiced in many parts of north, northeast and west Africa and which is illegal in most western countries.

For sure, the practice of female genital mutilation is a gross insult to womanhood and stems from male fears of women’s sexuality.  It usually involves removal of the clitoris though milder versions which only involve trimming the labia may have no more effect on ability to be aroused than the male counterpart.

But male circumcision has its sexual drawbacks too.  A 2002 US report in the Journal of Health Psychology stated that "the genitally intact male has thousands of fine touch receptors and other highly erogenous nerve endings—many of which are lost to circumcision, with an inevitable reduction in sexual sensation experienced by circumcised males."


From A New Debate on Female Circumcision ...

Dr. Shweder says that many Westerners trying to impose a “zero tolerance” policy don’t realize that these initiation rites are generally controlled not by men but by women who believe it is a cosmetic procedure with aesthetic benefits. He criticizes Americans and Europeans for outlawing it at the same they endorse their own forms of genital modification, like the circumcision of boys or the cosmetic surgery for women called “vaginal rejuvenation.” After surveying studies of female circumcision and comparing the data with the rhetoric about its harmfulness, Dr. Shweder concludes that “‘First World’ feminist issues and political correctness and activism have triumphed over the critical assessment of evidence.”


From Confessions of a Circumcised Woman ...

I will speak out against MGM because just like those innocent baby boys my prepuce has been removed. Can I orgasm? Yes I can. Within about sixty seconds of sexual contact I orgasm. Sounds good right? WRONG. After I orgasm I experience oversensitive raw pain for the duration of the sexual contact. There is no hood to protect my clitoris. I may very well be the only woman out there who is looking for a partner who is a "one minute wonder" to spend the rest of my life with. Even now, years later, clothing, undergarments, contact... all of these irritate my overexposed clitoris.


From Mutilation victim finds a voice in Switzerland ...

“It’s a very old and a very ugly tradition, but I’m against calling it a crime because people like my parents and their parents did it. It’s been passed down from generation to generation – they thought they were doing the best for their girls,” Bürgin said.

According to her, the tradition is important to them for cultural and religious reasons. The idea is that the daughters will stay physically “clean” and that they won’t think about sex before marriage.

“Unfortunately, I couldn’t discuss it earlier because it was taboo, but now it’s becoming more acceptable,” she said, adding that she could never understand why circumcision was treated like a “lovely, happy occasion” where she grew up.

Indonesia, home to the world’s biggest Muslim population, argues that this form of circumcision is largely symbolic, not harmful and should not be seen as mutilation.

The United Nations thinks otherwise. In December it passed a resolution banning female genital mutilation, which extends to the circumcision practiced in Indonesia.

Procedures such as pricking, piercing, incising, scraping, cauterization or burning that are carried out for non-medical purposes are classed by the World Health Organization as mutilation along with practices that alter or remove any part of the genitals.


In the U.S., MGM is mostly spoken of very casually while FGM is highly condemned.  The next couple of links are from a message board and a blog in which FGM is discussed as casually and photos are even shown.  In fact, if one did not know better, it would be easy to think it was harmless.  Just as harmless as many people feel MGM is.  Cutting off any part of any child's body is not harmless.

Have you Sunat your girls?
The Circumcision

Doesn't genital mutilation sound better when we have names for it like "Sunat" and "Circumcision?"  If you don't think the word "mutilation" is appropriate, here's the definition:
Sounds fitting to cutting genitals, male or female, to me.


From Boys Too Deserve the Same Protections as Girls ...

1... any person who knowingly separates or surgically alters normal, healthy, functioning genital tissue of a female minor is guilty of a class C felony.
2... any belief that the operation is required as a matter of custom, ritual, or standard of practice may not be taken into consideration. 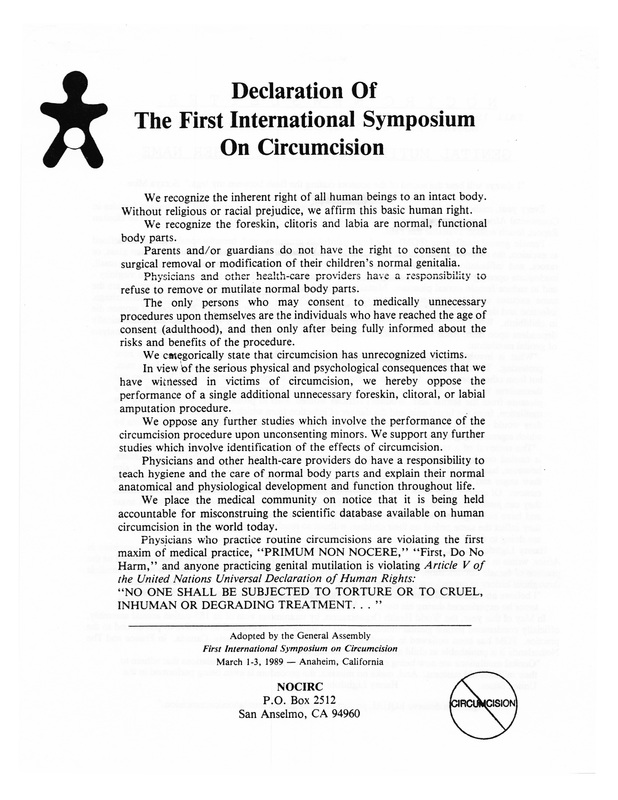 Declaration of the First International Symposium on Circumcision 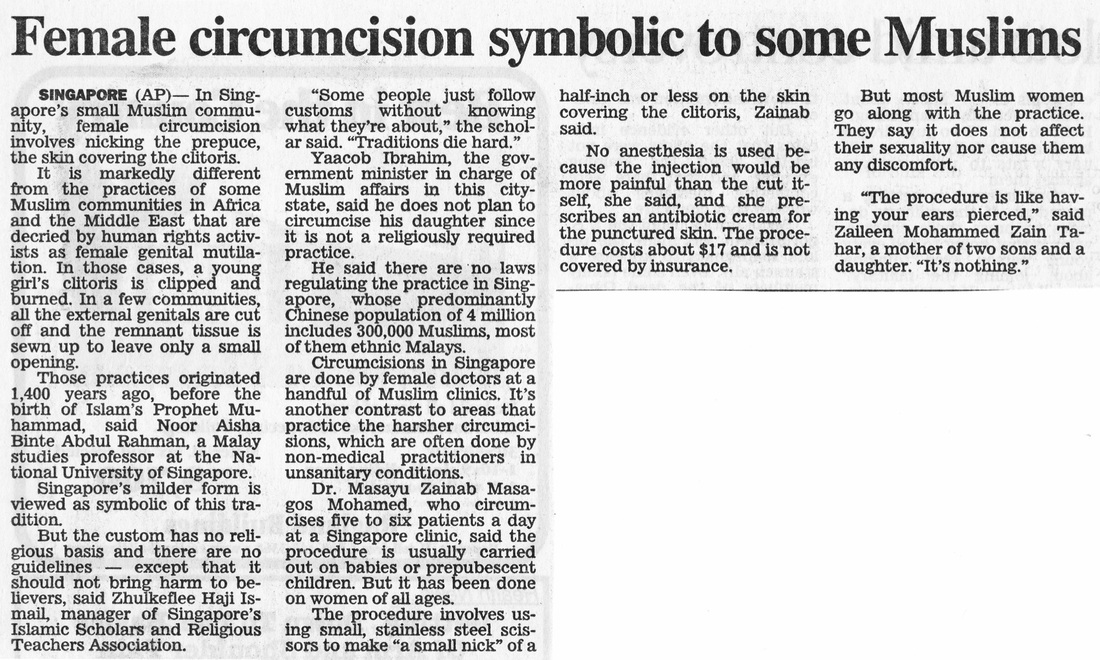 Most Muslim women go along with the practice.  They say it does not affect their sexuality nor cause them any discomfort. 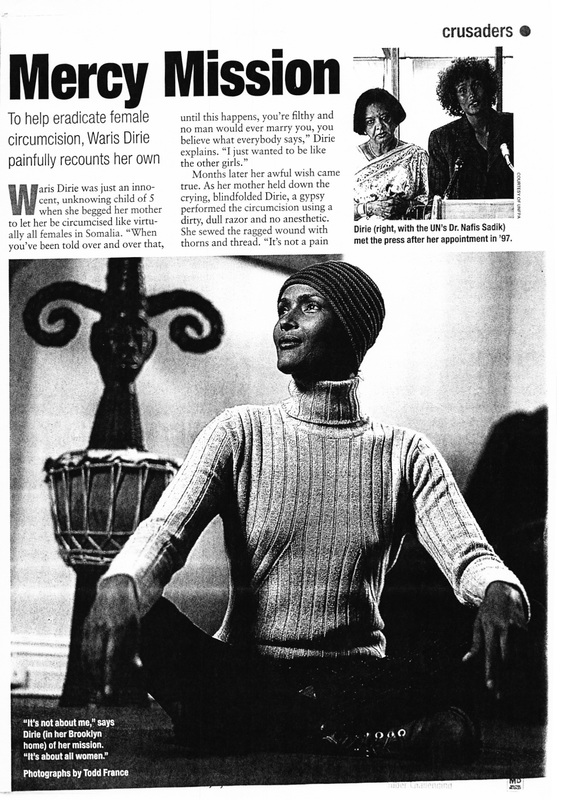 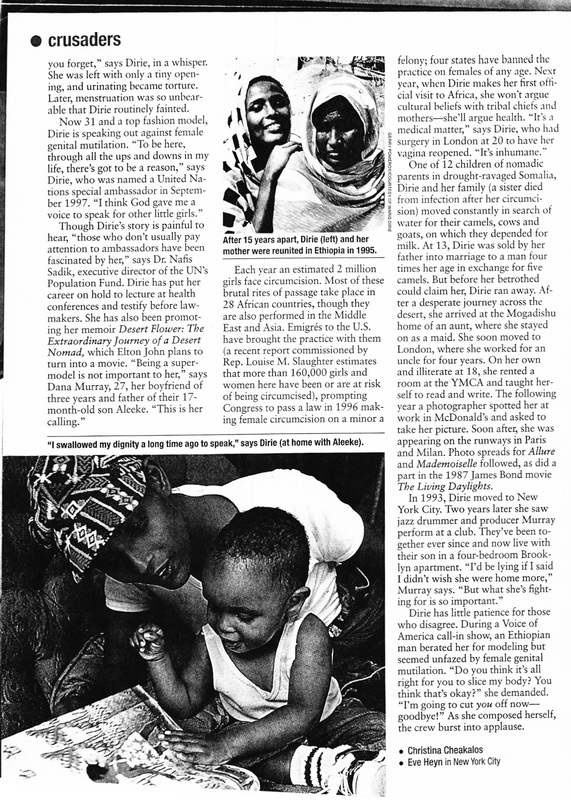 Waris Dirie was just an innocent, unknowing child of 5 when she begged her mother to let her be circumcised like virtually all females in Somalia.  "When you've been told over and over that, until this happens, you're filthy and no man would ever marry you, you believe what everybody says,' Dirie explains.  'I just wanted to be like the other girls."

Dirie has little patience for those who disagree.  During a Voice of America call-in show, an Ethiopian man berated her for modeling but seemed unfazed by female genital mutilation.  "Do you think it's all right for you to slice my body?  You think that's okay?"  she demanded.


It's not alright to slice anyone's body, especially a child who cannot consent. 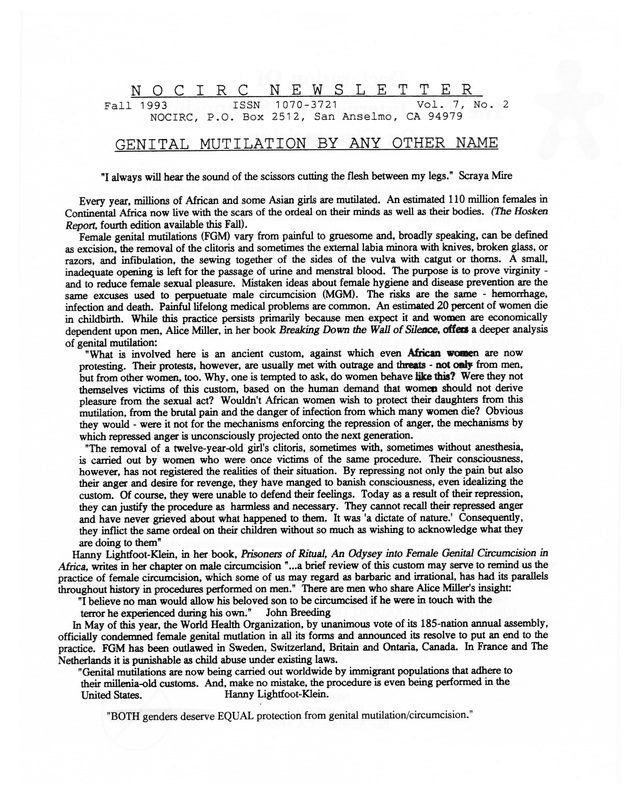 GENITAL MUTILATION BY ANY OTHER NAME

The removal of a twelve-year-old girl's clitoris, sometimes with, sometimes without anesthesia, is carried out by women who were once victims of the same procedure. Their consciousness, however, has not registered the realities of their situation.  By repressing not only the pain but also their anger and desire for revenge, they have managed to banish consciousness, even idealizing the custom ... Today as a result of their repression, they can justify the procedure as harmless and necessary. 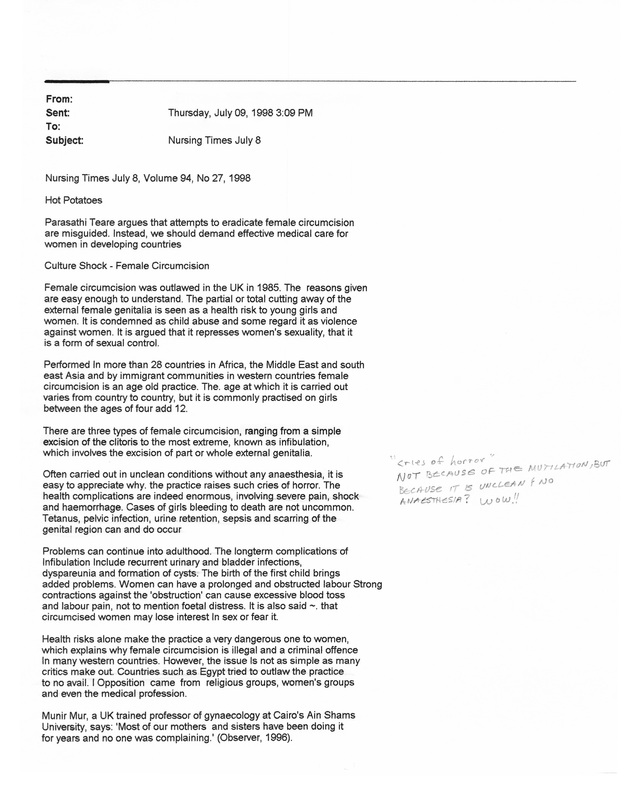 Most of our mothers and sisters have been doing it for years and no one was complaining. 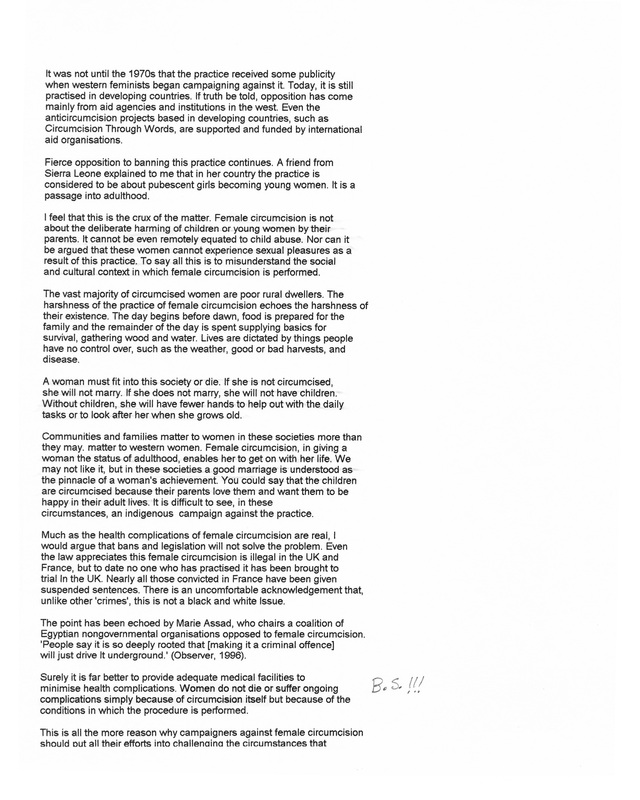 Female circumcision is not about the deliberate harming of children or young women by their parents.  It cannot be even remotely equated to child abuse.  Nor can it be argued that these women cannot experience sexual pleasures as a result of this practice.  To say all this is to misunderstand the social and cultural context in which female circumcision is performed.

A woman must fit into this society or die.  If she is not circumcised, she will not marry ...

Surely it is far better to provide adequate medical facilities to minimize health complication.  Women do not die or suffer ongoing complications simply because of circumcision itself but because of the conditions in which the procedure is performed. 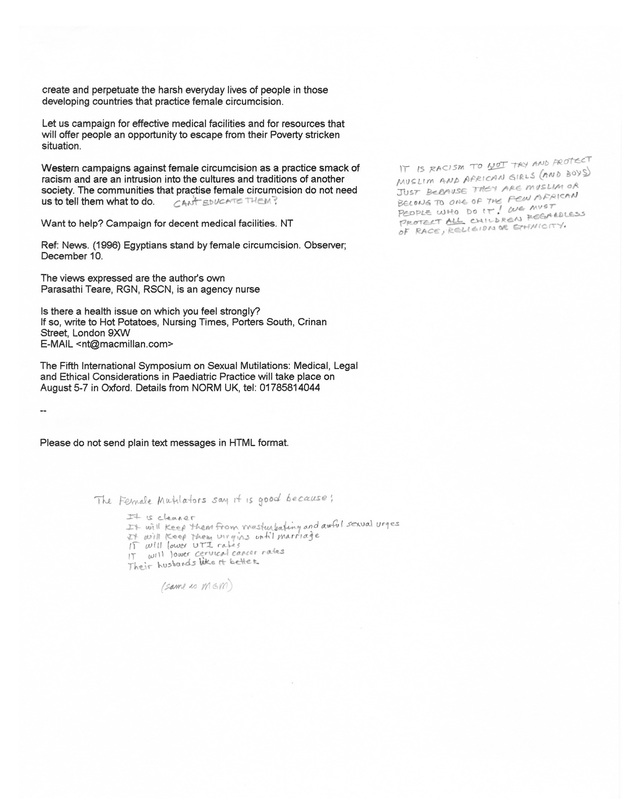 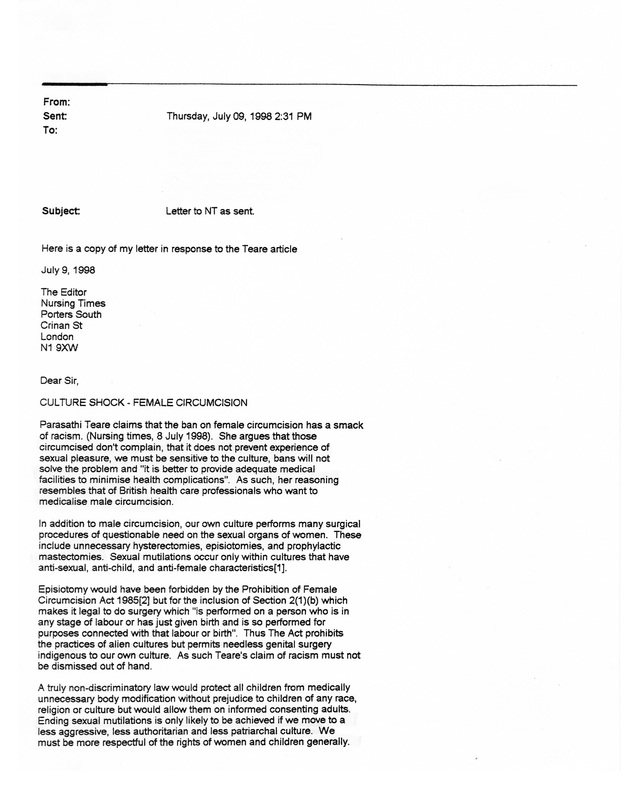 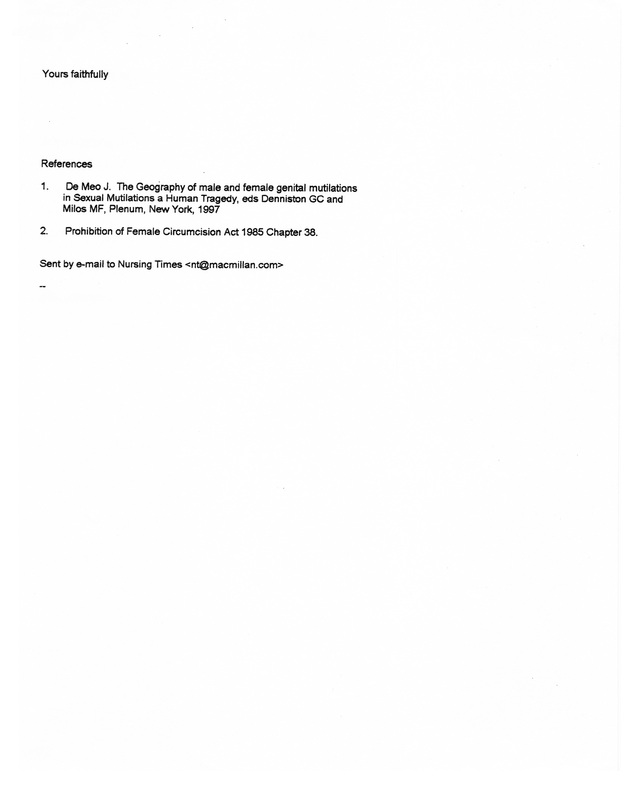 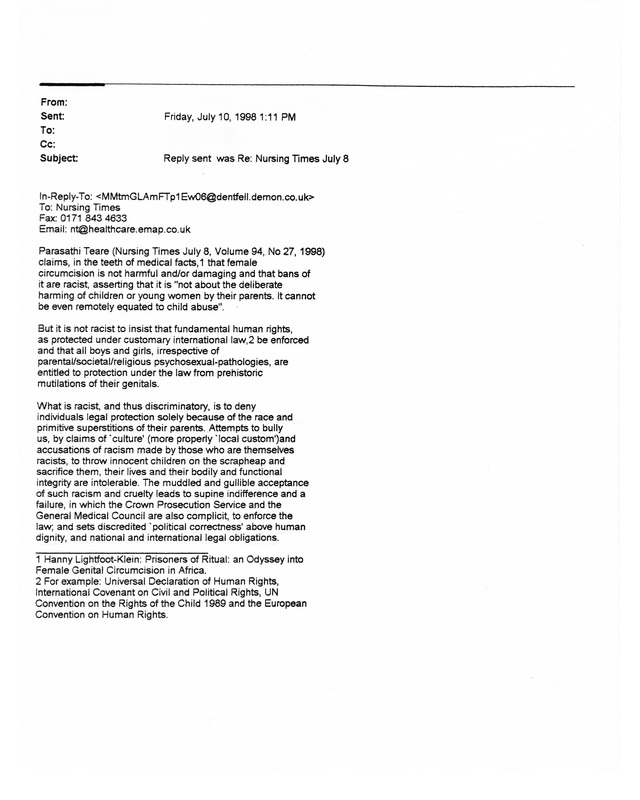 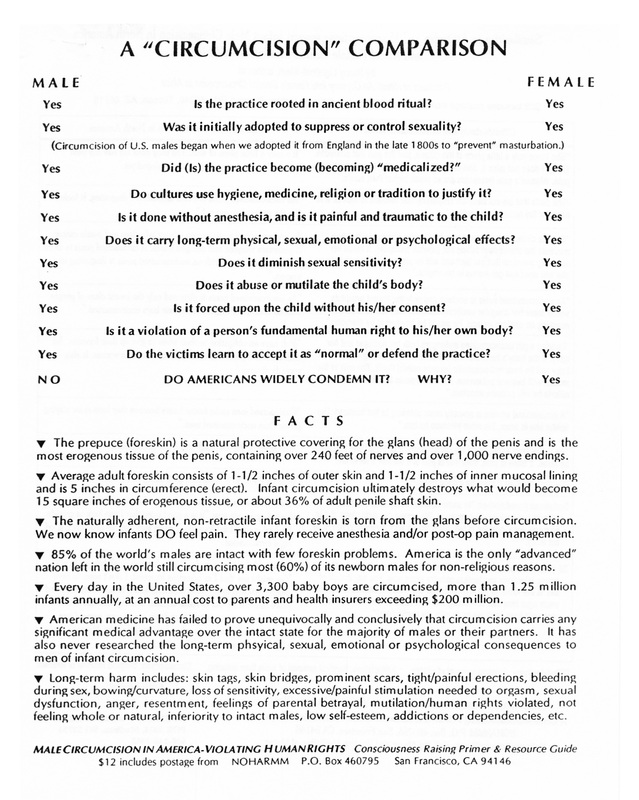 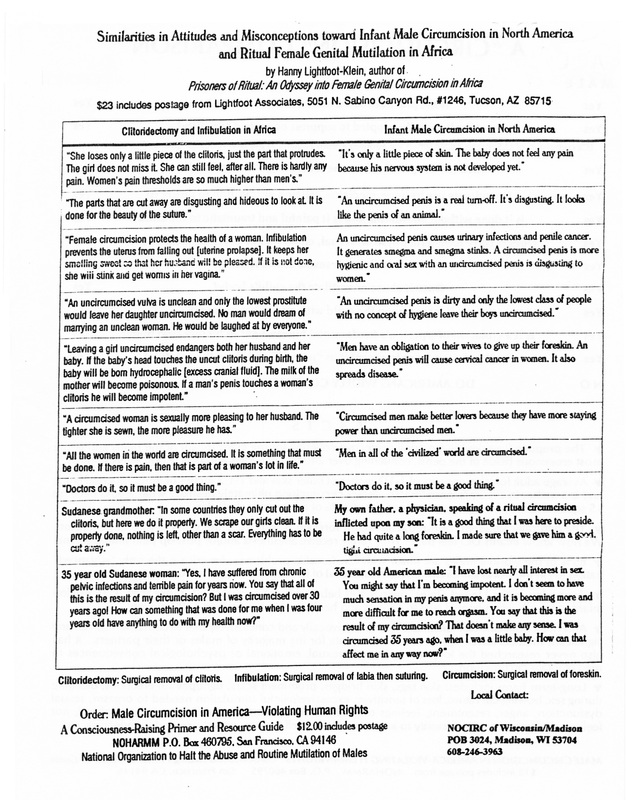 Similarities in Attitudes and Misconceptions toward Infant Male Circumcision in North America and Ritual Female Genital Mutilation in Africa.


For those who still feel FGM is worse than MGM, I ask that you view Global Survey of Circumcision Harm Photo Gallery of Damage and A Gallery of Circumcisions.  Few of the men pictured there would agree.  Knowing that these complication can and do happen, and that even death is a possibility, how can anyone feel it is worth the risk of imposing circumcision upon an infant?


From Why Circumcision is a Feminist Issue ...

Let’s let our children come into this world without violence.  Let’s leave them be, perfect in the way they were made.  We were.  We are.  Don’t our sons deserve the same respect?