Too frequently the foreskin is referred to as "just a flap of skin" that makes "no difference."  Nothing could be further from the truth, as the prepuce is a complex organ that serves many purposes, not the least of which is sexual pleasure.  Marketers of sexual enhancement products make a fortune from those who are searching to find what they are missing.

Following are articles documenting the known functions of the foreskin.  As further studies are conducted, more functions are being discovered.

The human foreskin is highly innervated, and vascularized sensitive erogenous tissue. It plays an important role in normal human sexual response and is necessary for normal copulatory behavior. An understanding of this role is now emerging in the scientific literature. Removal of the foreskin (circumcision) interferes with normal sexual function.

Many people often deny the impact of infant circumcision by calling it "a little snip." Cutting away any body part from a newborn human, however, is a little snip.


From  WHAT YOUR DOCTOR MAY NOT TELL YOU ABOUT CIRCUMCISION:  Untold Facts on America's Most Widely Performed - and Most Unnecessary - Surgery ...

It is important to remember that there are no vestigial organs or body parts. Each and every part of the body serves a specific, important purpose. If the foreskin failed to serve a purpose, it would have disappeared millions of years ago. Drs. Cold and McGrath conclude that, over the last 65 million years, the foreskin has offered reproductive advantages. It must also be remembered that sexual selection has refined the external genitalia of every creature, including man. The human foreskin is the product of millions of years of evolutionary refinement, and, as such, the human foreskin represents the epitome of design perfection.

The foreskin is more than just a flap of skin. It is an integral part of the male reproductive system.


From Does Circumcision Cause Erectile Dysfunction? ...

The United States, a nation with 4.5% of the world's population, consumes 47% of the world's Viagra.  Turns out the same nation has been circumcising the majority of its male infants for generations.

A new study in the International Journal of Men's Health shows that circumcised men have a 4.5 times greater chance of suffering from erectile dysfunction than intact men.

Israel, a country that routinely circumcises their baby boys for religious reasons, was the number one country for U.S imported Viagra in 2010.  Viagra is so common there that the Pfizer pharmaceutical company asked for permission to market Viagra without a doctor's prescription, making it an over-the-counter medication.


From Circumcision:  the hidden sex problems ...

“There are lots of medical problems with circumcision,” he says. “And they are at different stages of life.  It’s often said that circumcision has very few complications.  But it’s only if you look at the very short term.”


From Fine-touch pressure thresholds in the adult penis ...


From Pleasures of the Foreskin ...

Only in the US, where pleasure is now cultivated but foreskins are still rare, is that self-evident fact disputed.


From Male circumcision and sexual function in men and women: a survey-based, cross-sectional study in Denmark ...

It is my hope that telling this story may help other men, especially younger men going through similar anxiety about their penises.  It is important to realise that 'normal' is actually a wide range of natural variations and that whatever shape, size or colour our penises are we should learn to love them and embrace the pleasure they can bring us.


From Male circumcision decreases penile sensitivity as measured in a large cohort. ...

This study confirms the importance of the foreskin for penile sensitivity, overall sexual satisfaction, and penile functioning. Furthermore, this study shows that a higher percentage of circumcised men experience discomfort or pain and unusual sensations as compared with the uncircumcised population. Before circumcision without medical indication, adult men, and parents considering circumcision of their sons, should be informed of the importance of the foreskin in male sexuality.


See the difference between circumcised and complete penises at Keratinization and Circumcision Status and Intact or Circumcised:  A Significant Difference in the Adult Penis.


See more on foreskin function at Introduction to the natural, intact penis and Sex As Nature Intended It. 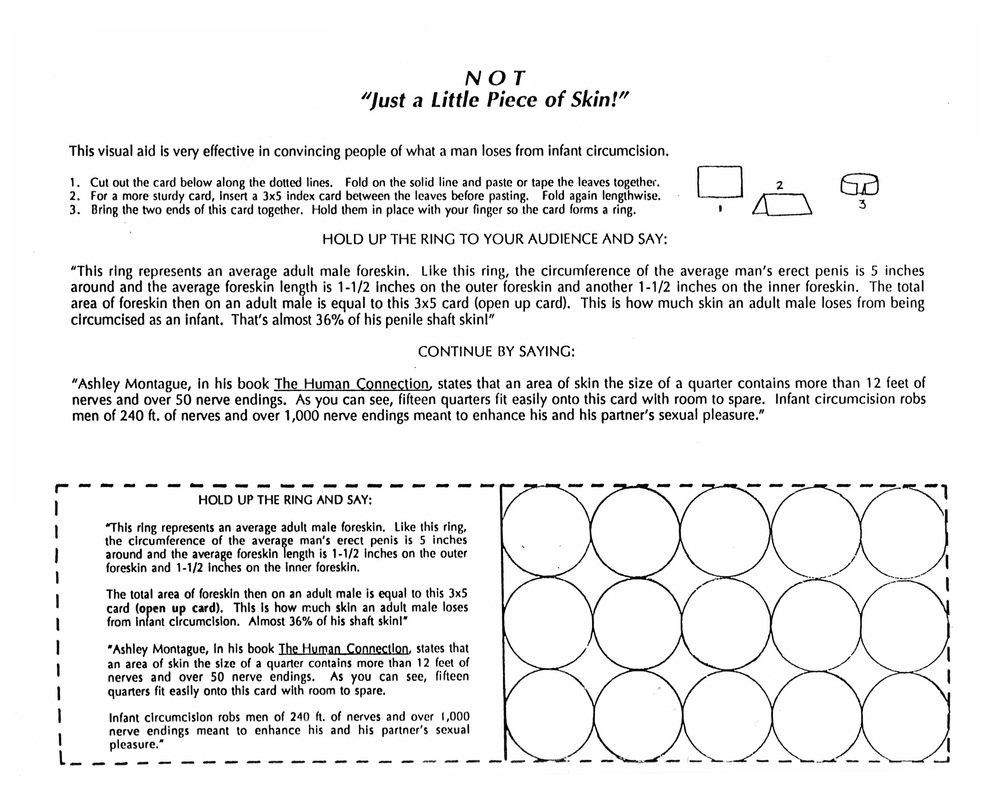 It's Not "Just a Little Piece of Skin"! 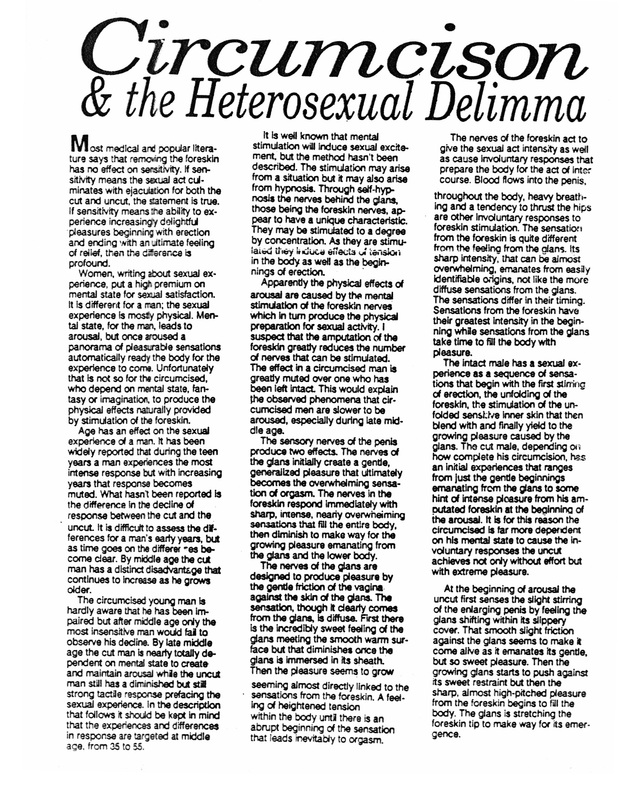 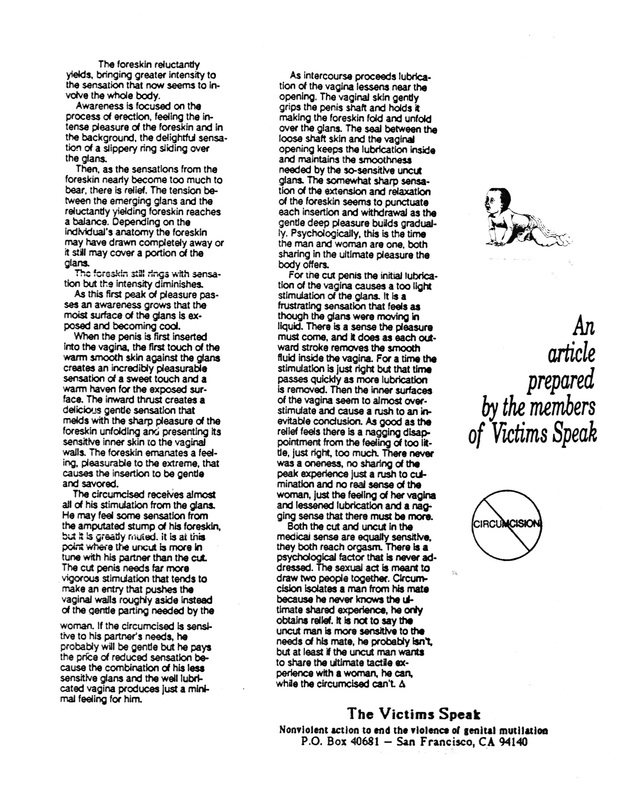 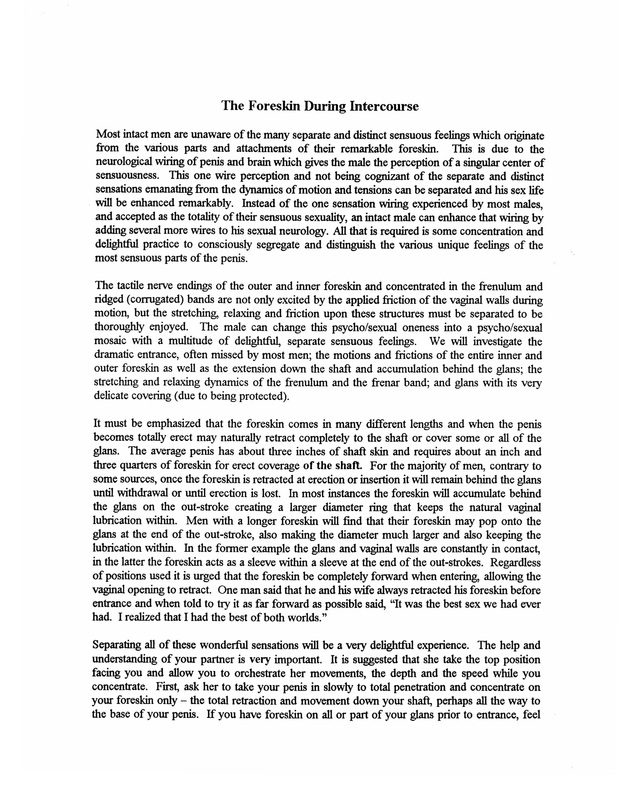 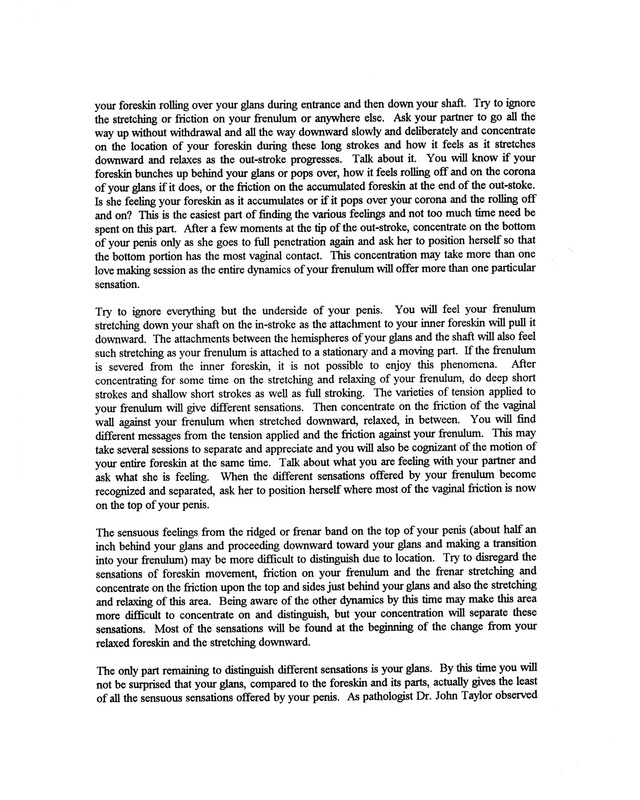 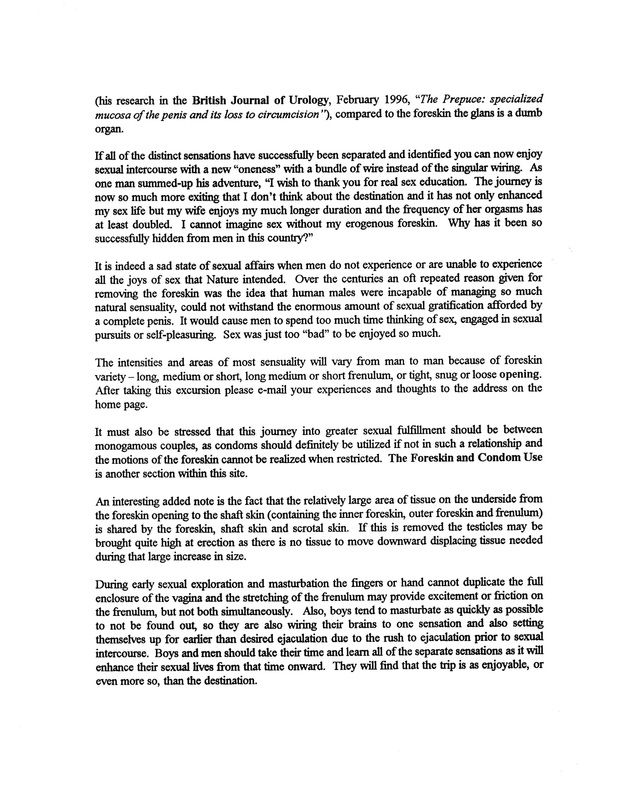 The Foreskin: What does it do? 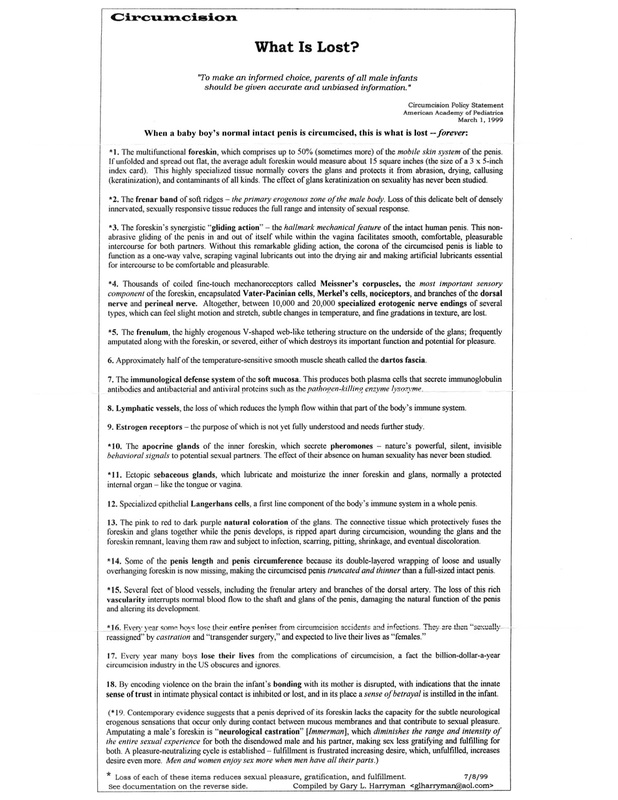 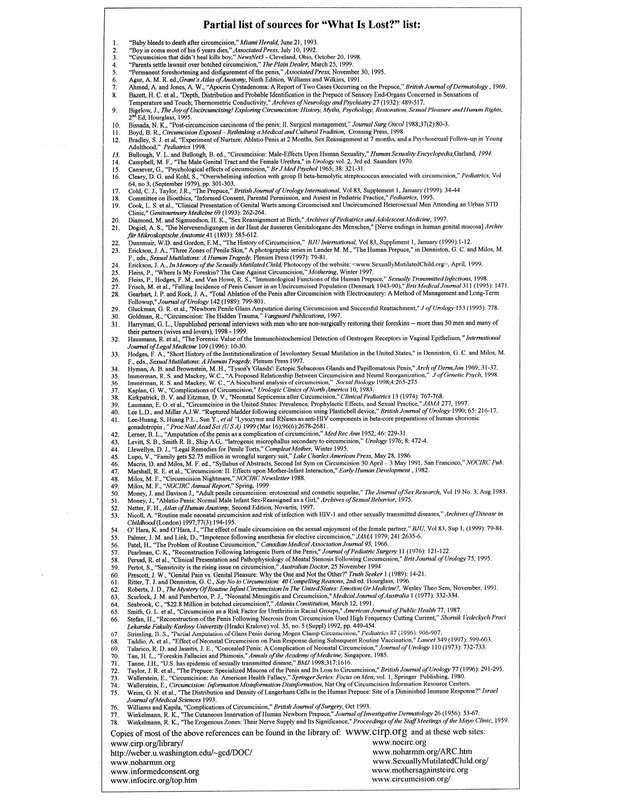 What is lost due to circumcision? and What is Lost to Circumcision. 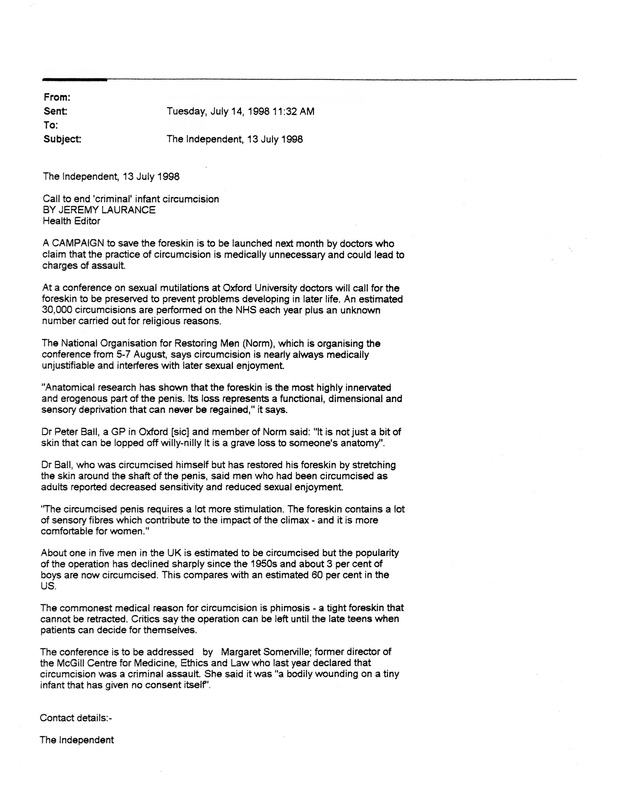 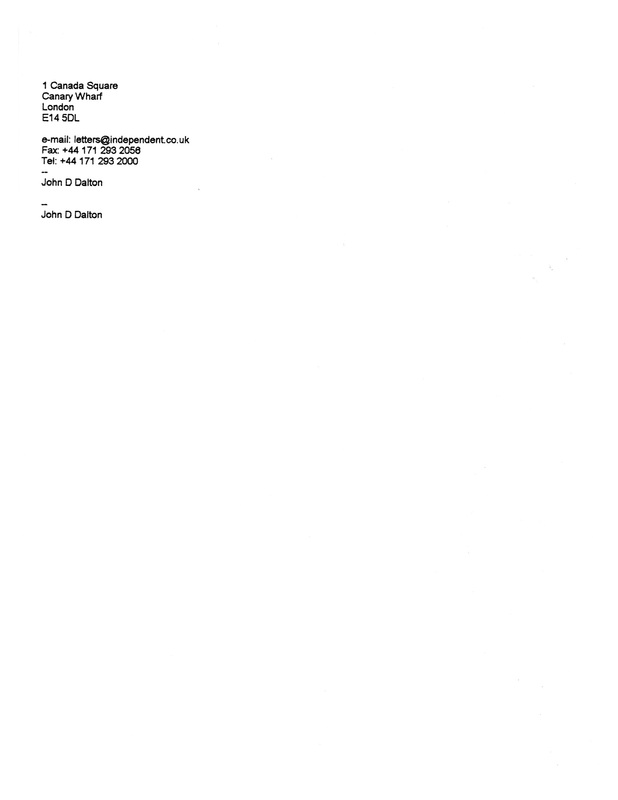 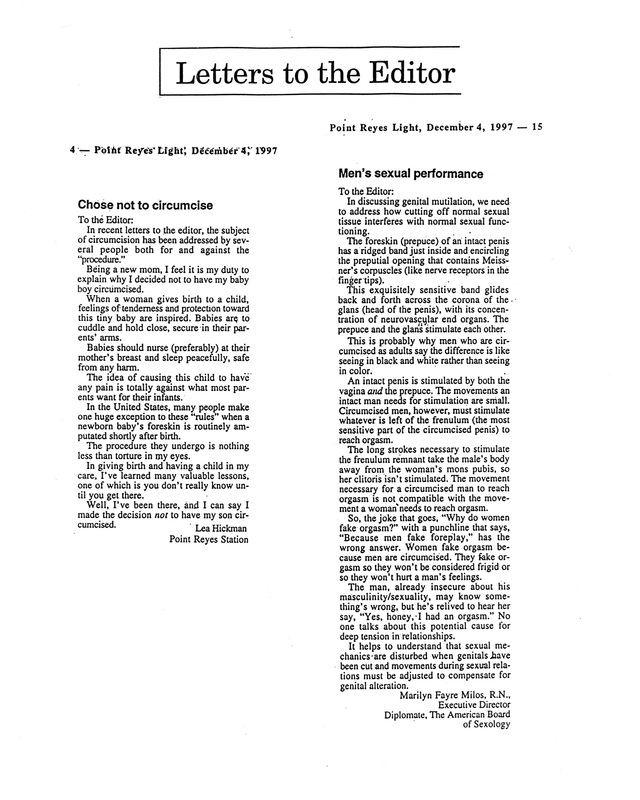 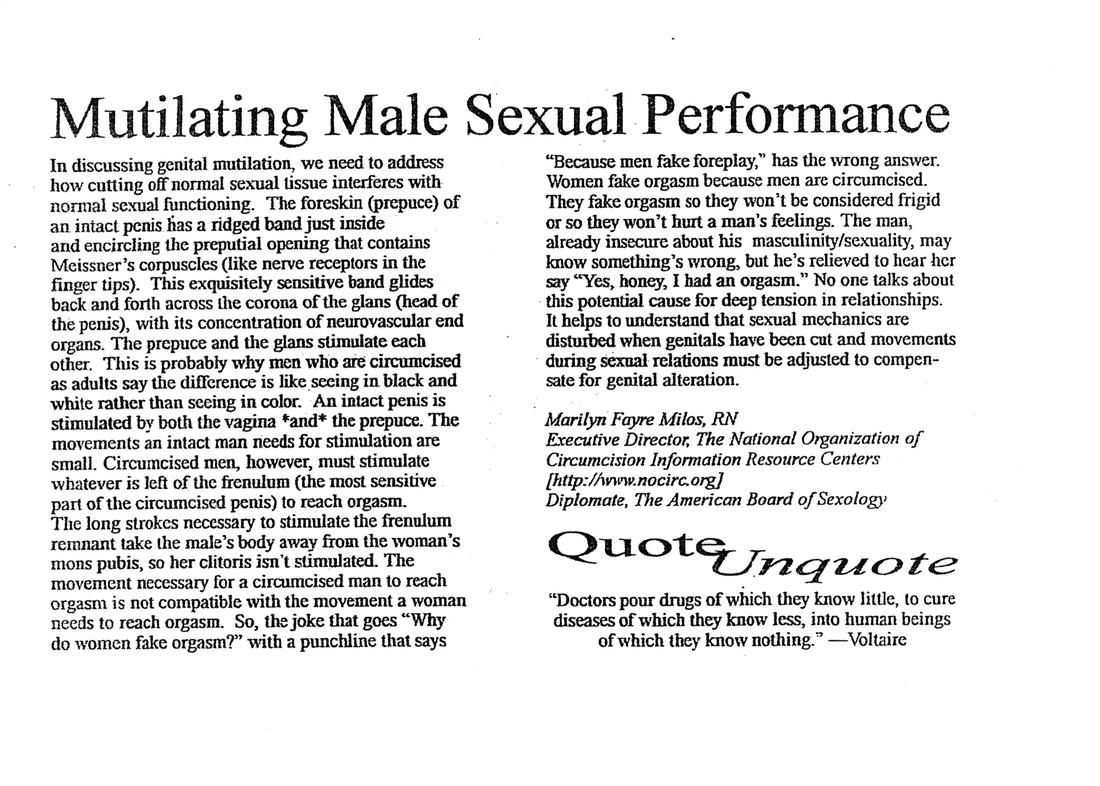 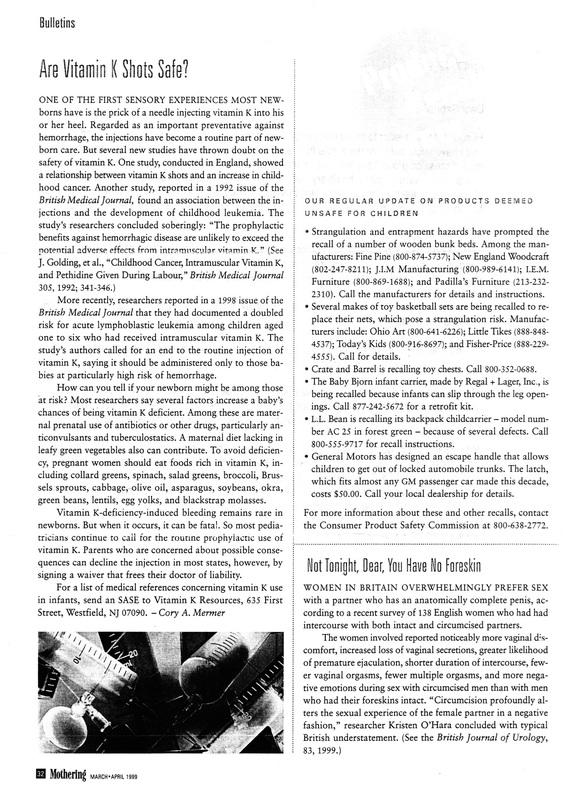 Not Tonight, Dear, You Have No Foreskin 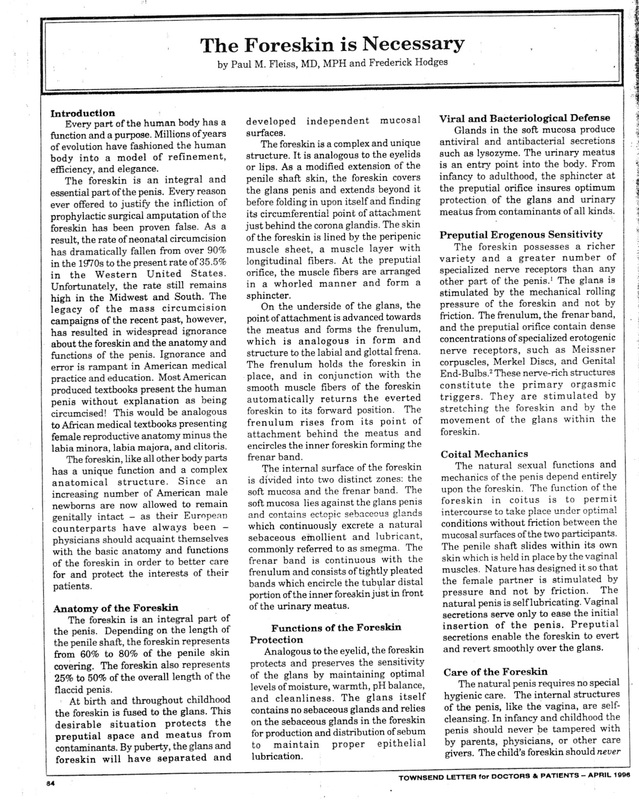 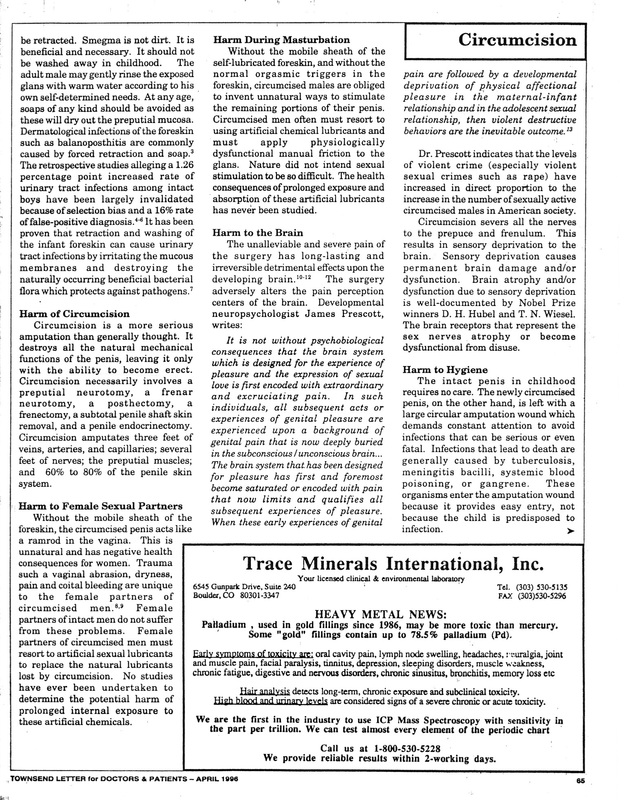 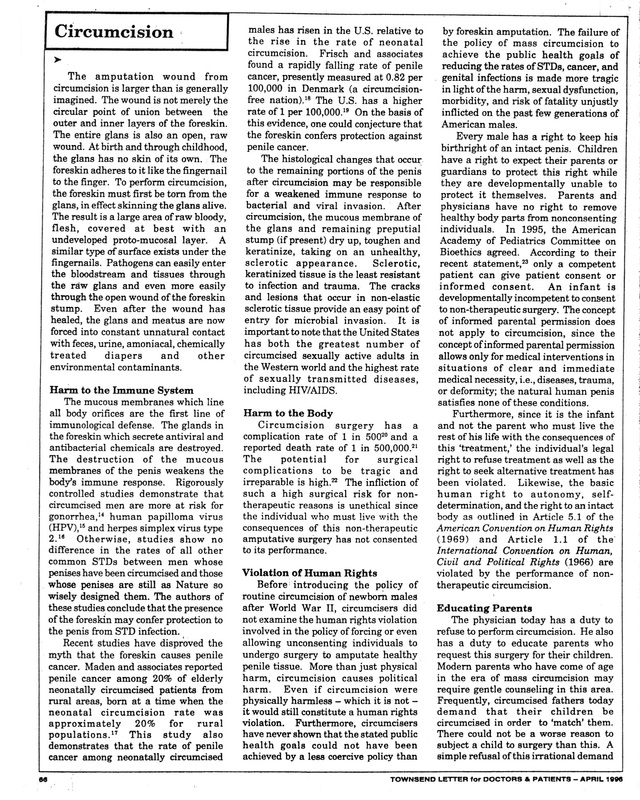 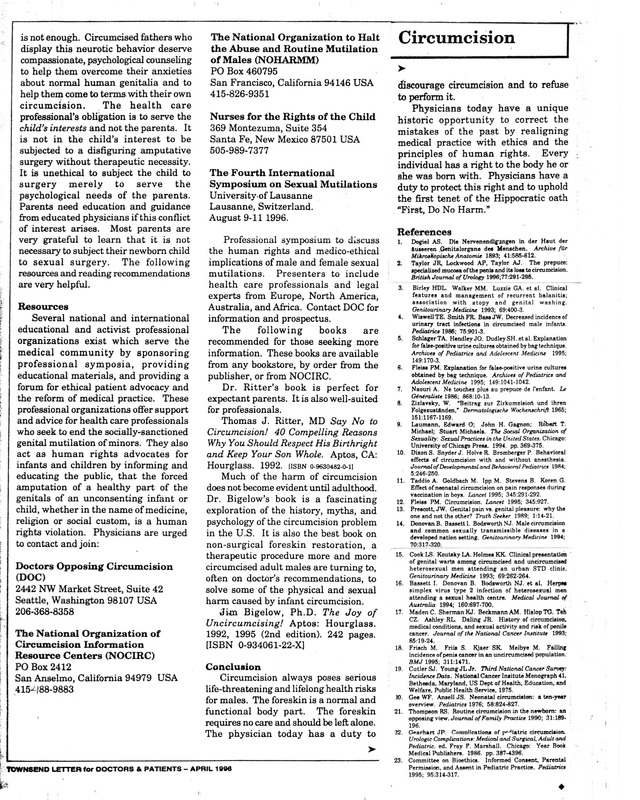 The Foreskin is Necessary 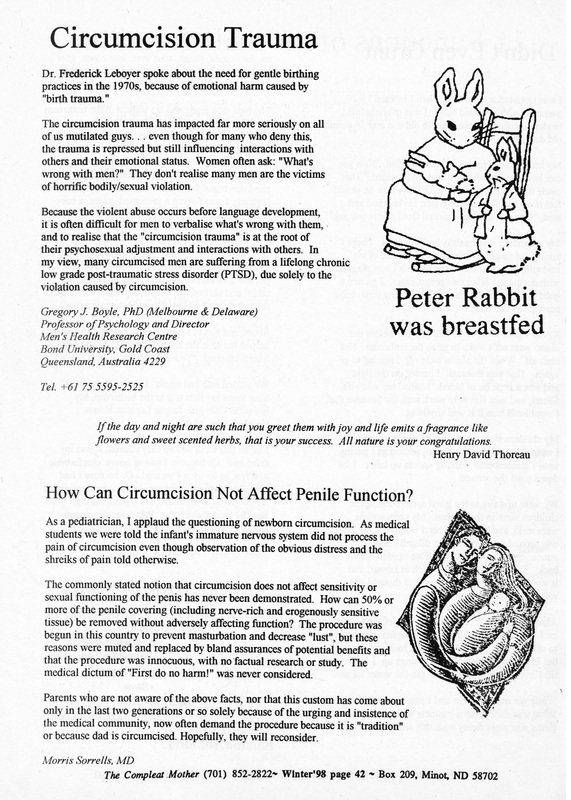 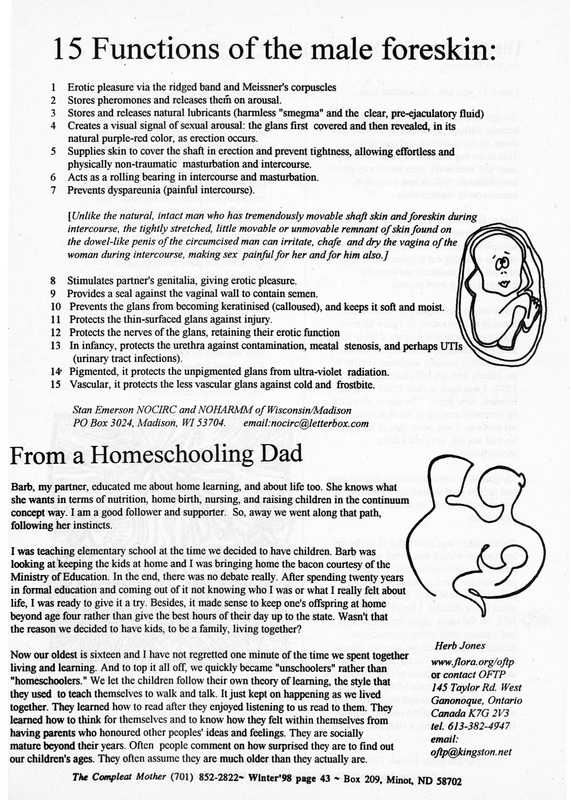 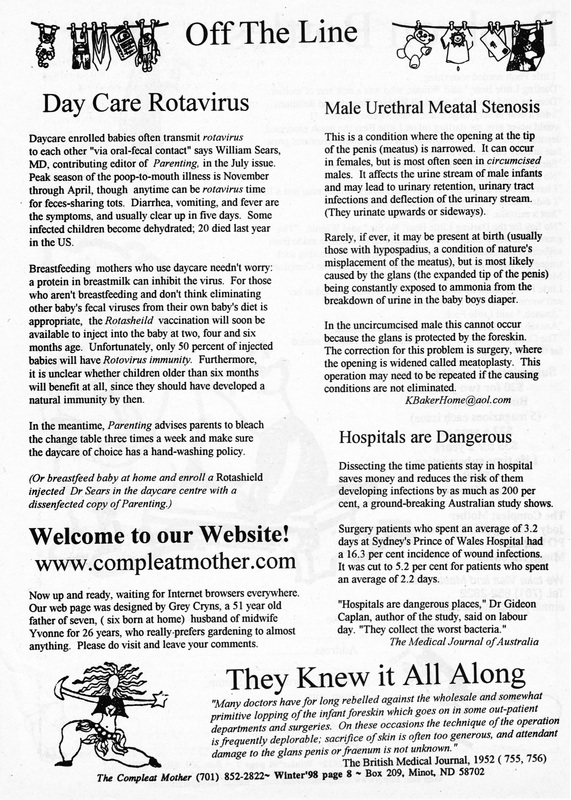 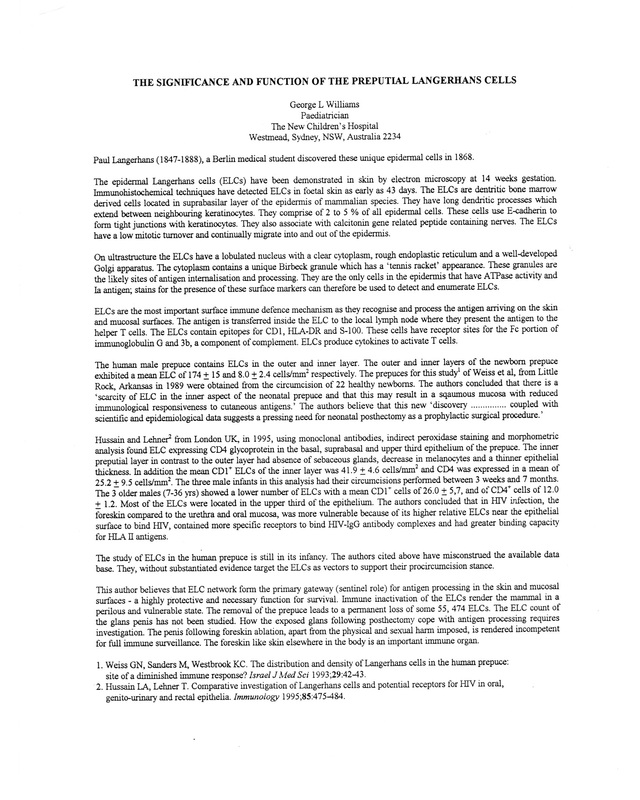 The Significance and Function of Preputial Langerhans Cells 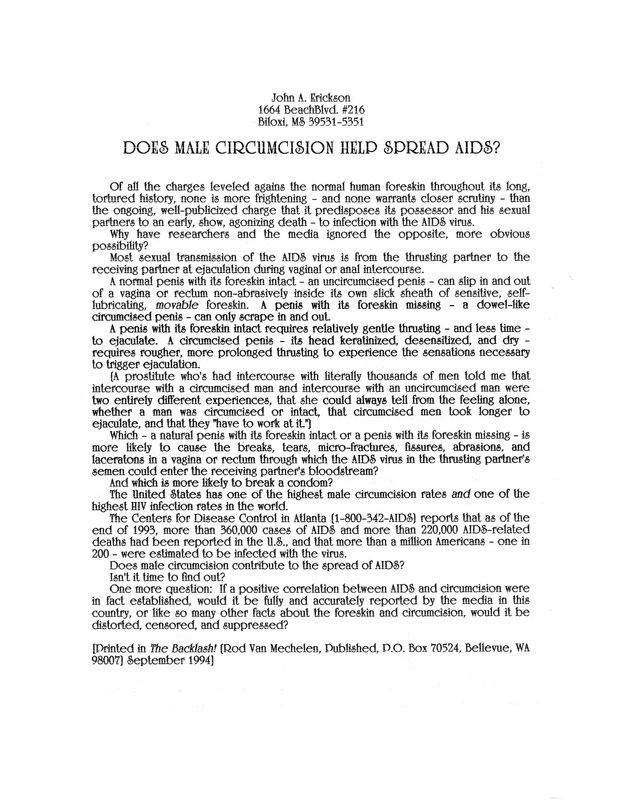