The worst "foreskin problem" most intact males ever have is that someone thinks they have a problem. -- John A. Erickson

Science must not impose any philosophy, any more than the telephone must tell us what to say. -- G.K. Chesterton 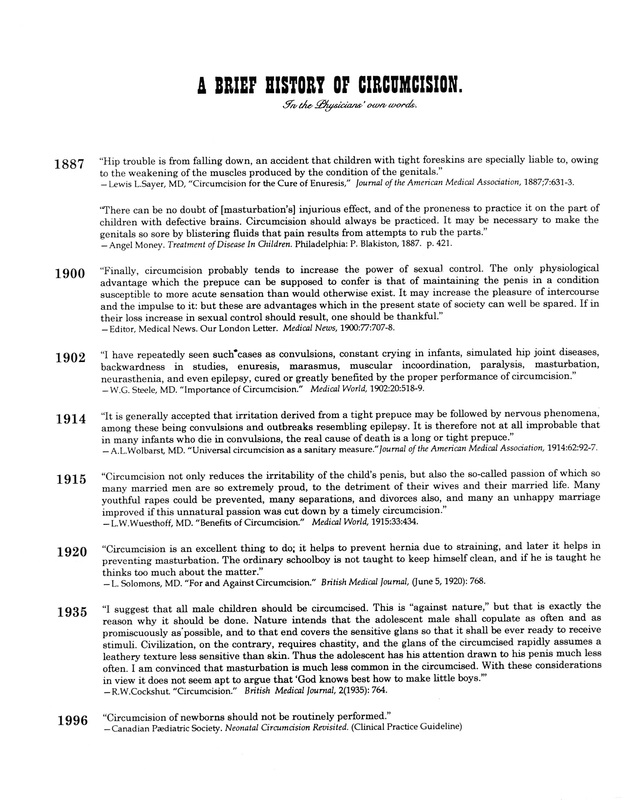 Misinformation abounds when it comes to circumcision, even in the medical community.  Complications and loss are minimized and underreported while supposed benefits are greatly exaggerated.  The supposed benefits of male circumcision apply equally to female circumcision, but that's never discussed.  Prevention and treatment, not amputation, should be practiced on all healthy body parts of all people.  Anything short of that is violating the Hippocratic Oath.

Why is there such misinformation?  Many different areas of conflict of interest, not the least of which is profit.

Think involuntary organ donation and the selling of body parts is illegal?  Not if you are a baby boy and the part is your foreskin.  $559.00 per 1 ml.

What are they used for?  For one thing, Foreskin Facecream.


From Neonatal circumcision does not reduce HIV/AIDS infection rates ...

Omitting the Cochrane Systematic Review in the research protocol and final publication raises serious concern. Similarly, peer-reviewed journals have repeatedly accepted papers that omit contradictory evidence.  A journal reviewer for the New England Journal of Medicine, JAMA, Archives of Disease in Childhood and Pediatrics stated under oath that he had never accepted any paper attempting to demonstrate the inefficacy of infant circumcision as a prevention tool.


And who is the reviewer?  Edgar J. Schoen, former head of the American Academy of Pediatrics Task Force on Circumcision who also writes poetry about circumcision.

Other circumfetish groups exist, such as Circlist, Acorn Society, and the Cutting Club, and they openly admit to a morbid fascination with circumcision to the point of sado-masochistic fetish. These groups advertise that doctors are among their members. Furthermore, there are anecdotal accounts of doctors becoming sexually aroused when circumcising boys. Circumcision certainly provides an opportunity not only to handle boys' penises without the condemnation that a sexual assault (in the sense that phrase is normally used) would attract, but also the opportunity to exercise power over another human being, to alter the penis and to control it and the boy's future sexual life.


From Unrecognized Conflicts of Interest Relating to Circumcision ...

The author of this commentary (Circumcision in the Time of HIV) reports no conflicts of interest. Conflicts of interest are not just financial. There may be personal and psychosocial factors involved. A Cochrane Review states, “Circumcision practices are largely culturally determined and as a result there are strong beliefs and opinions surrounding its practice. It is important to acknowledge that researchers’ personal biases and the dominant circumcision practices of their respective countries may influence their interpretation of findings.”[1]

The United States is the only country in the world that circumcises most of its male infants for non-religious reasons. The African studies cited in the commentary were mainly American-sponsored and led by American investigators. Personal and cultural biases include a tendency to support the procedure, search for benefits, and ignore the known and unknown psychological, social, sexual, physiological, neurological, and neurochemical harm.[2,3] In addition, commentators should be held to at least the same standard as peer reviewers. As stated by the International Committee of Medical Journal Editors, “any conflicts of interest that could bias their opinions” should be disclosed.[4]

Disclosure: The author is circumcised, Jewish, has no male children, has not performed any circumcisions, and has no other conflicts of interest.


Another member of the AAP's "circumcision task force," Andrew Freedman.

... until those studies are run – and run properly, with consenting populations, under strict ethical controls, I might add – it would be prudent for the AAP to abstain from making unsubstantiated claims about the benefits of circumcising infants in the United States. Especially since, as they concede on page 772 of their report “the true incidence of complications after newborn circumcision is unknown.” It should go without saying that if one doesn’t know how often complications occur, then one is plainly ill-equipped to assert that the benefits outweigh the risks.


From Cultural Bias in the AAP’s 2012 Technical Report and Policy Statement on Male Circumcision ...

Seen from the outside, cultural bias reflecting the normality of nontherapeutic male circumcision in the United States seems obvious, and the report’s conclusions are different from those reached by physicians in other parts of the Western world, including Europe, Canada, and Australia.

To these authors, only 1 of the arguments put forward by the American Academy of Pediatrics has some theoretical relevance in relation to infant male circumcision; namely, the possible protection against urinary tract infections in infant boys, which can easily be treated with antibiotics without tissue loss. The other claimed health benefits, including protection against HIV/AIDS, genital herpes, genital warts, and penile cancer, are questionable, weak, and likely to have little public health relevance in a Western context, and they do not represent compelling reasons for surgery before boys are old enough to decide for themselves.


From Out of step: fatal flaws in the latest AAP policy report on neonatal circumcision ...

The policy statement and the accompanying technical report may be most notable for what they do not address. The documents fail to engage with several critical issues: (1) the anatomy or function of the foreskin and the harm caused by its removal, (2) basic principles of biomedical ethics and how they bear upon the permissibility of the procedure in the first place and (3) fundamental issues in human and children’s rights and their relevance to the surgical infringement of bodily integrity. Any one of these omissions would, by itself, seriously compromise the integrity of the policy statement and the technical report; considered together, however, they might be taken to call into question the AAP’s diligence in carrying out its medical and ethical responsibilities in this area toward its constituent members and their child patients.


From A Cost-Utility Analysis of Neonatal Circumcision ...


Following are a series of papers, mostly researched and written by The Intact Network, dispelling many of the medical myths surrounding the foreskin and circumcision. 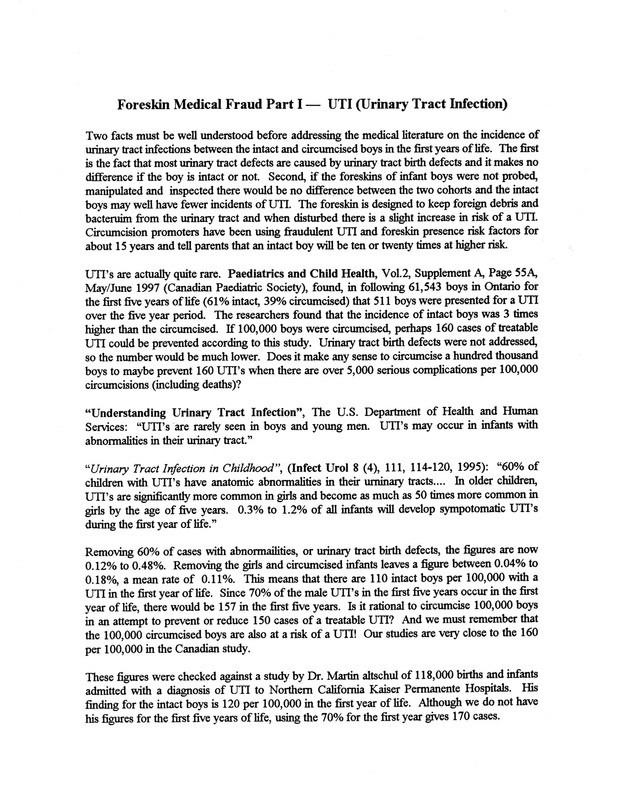 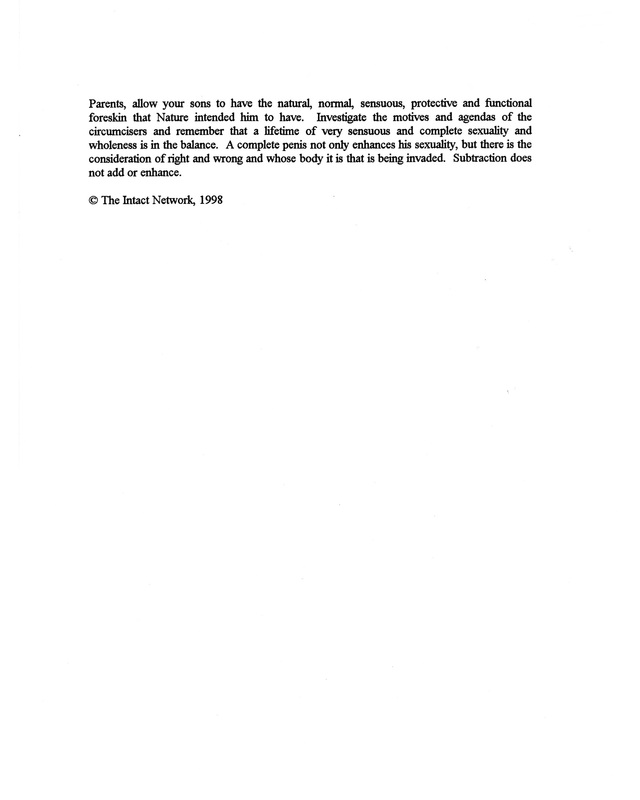 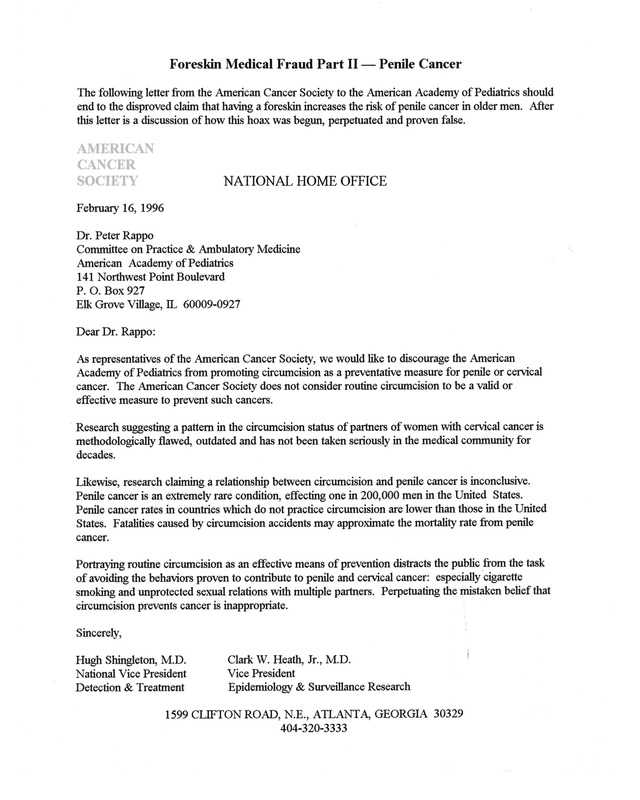 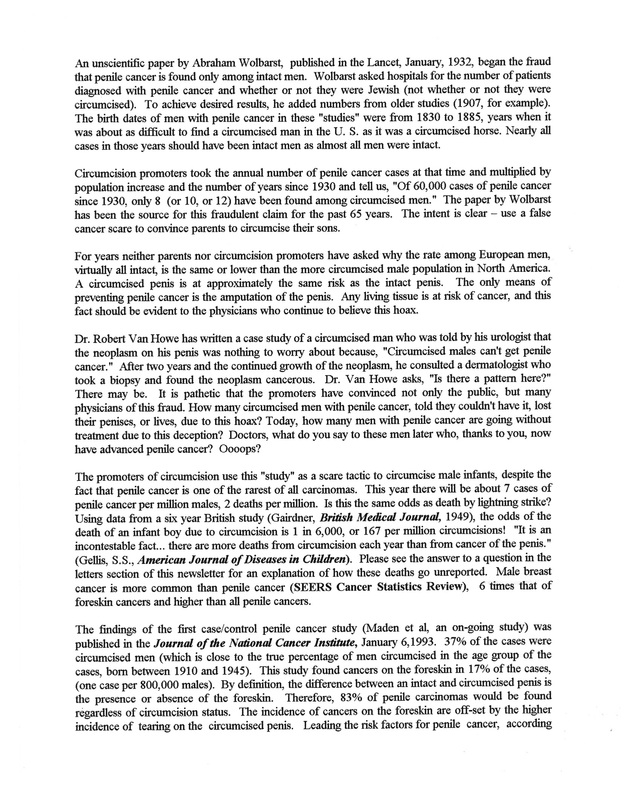 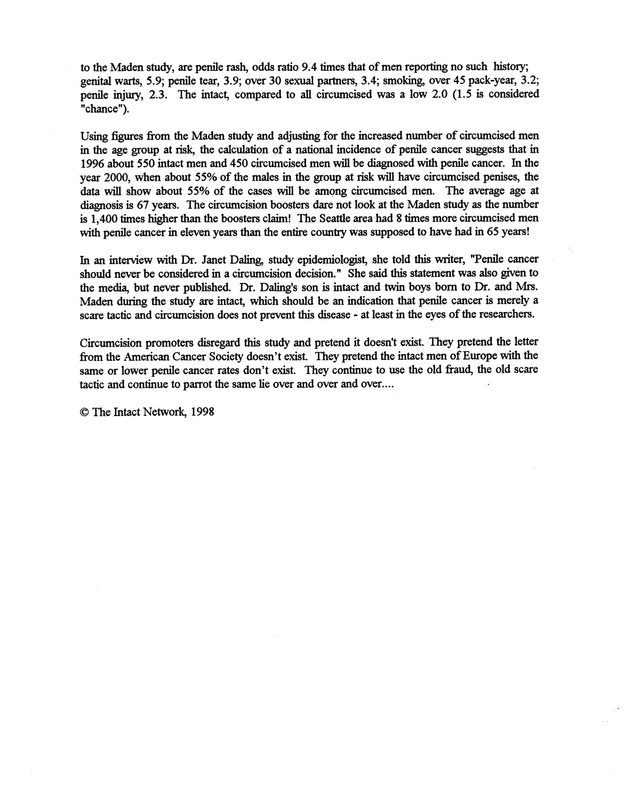 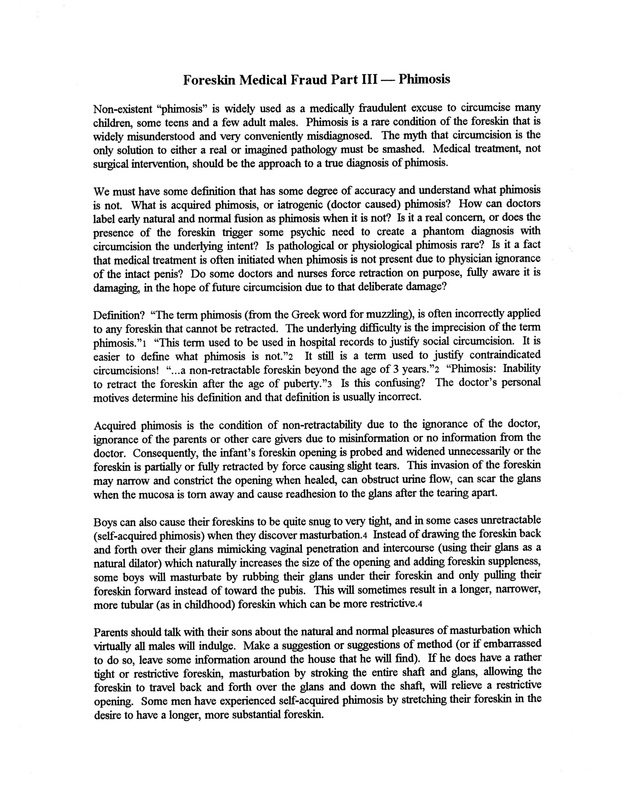 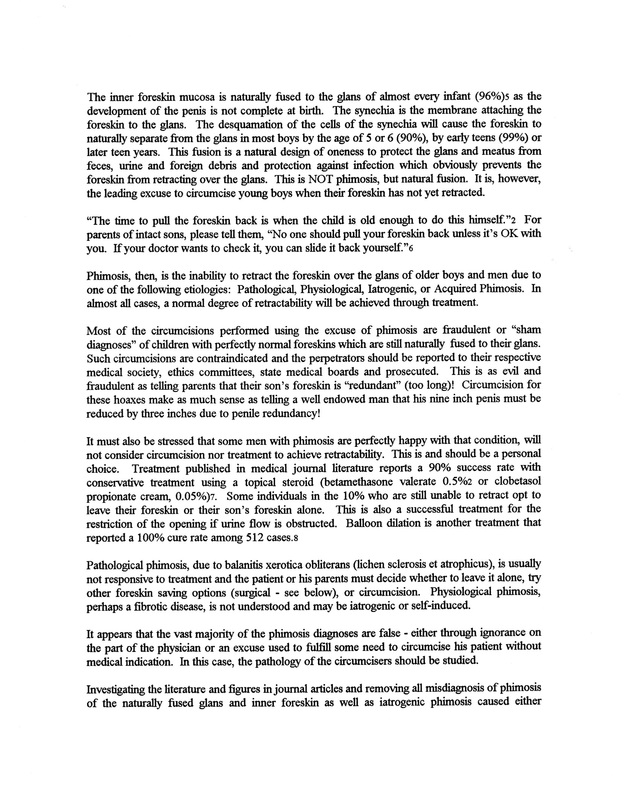 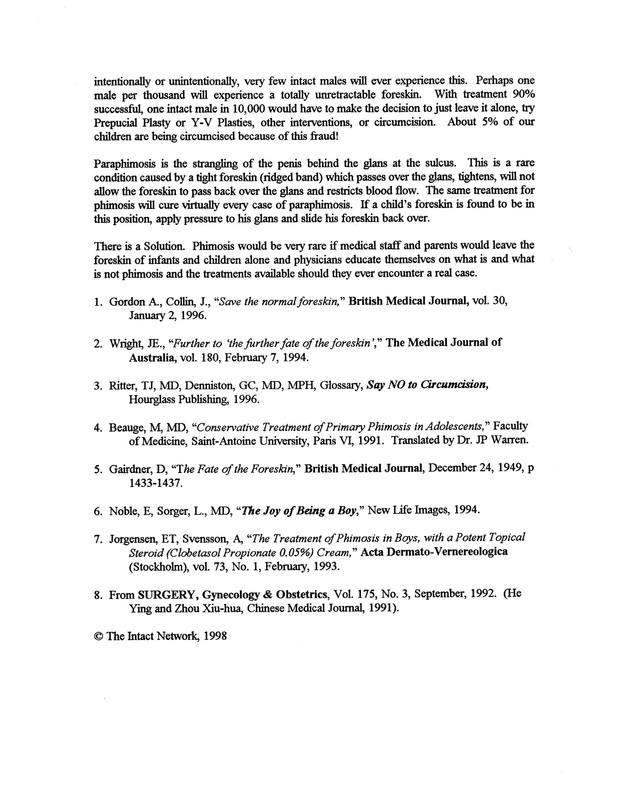 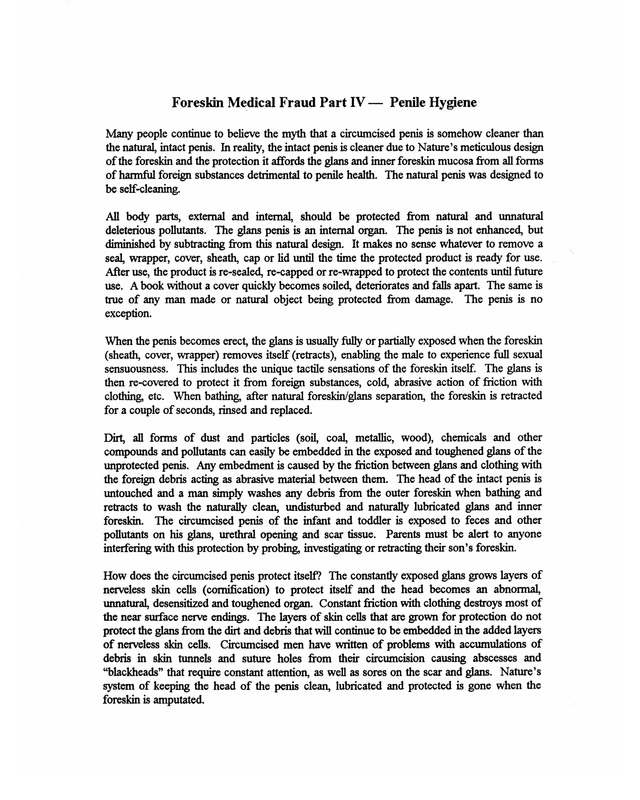 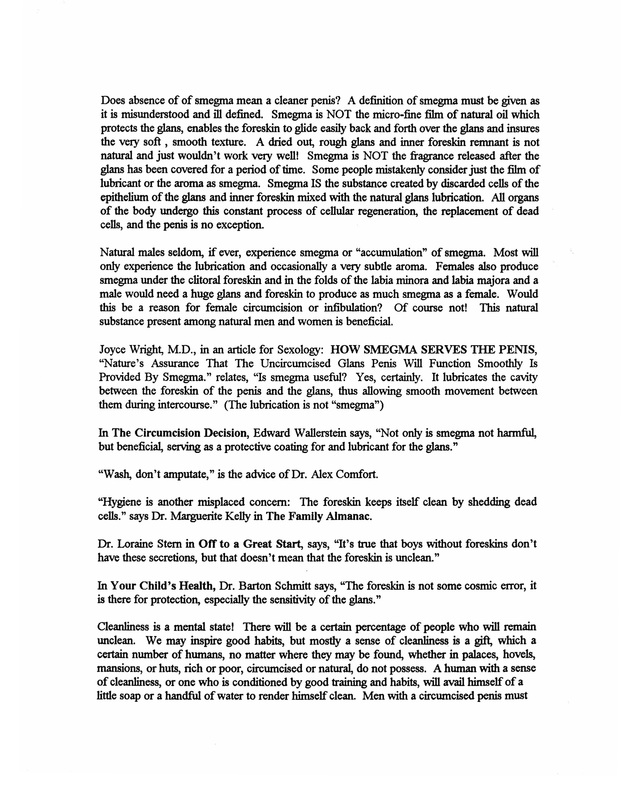 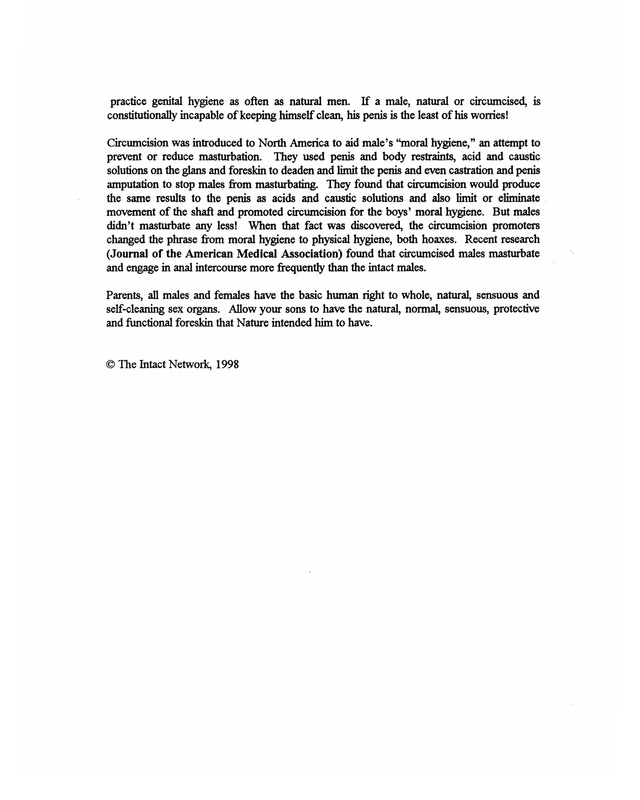 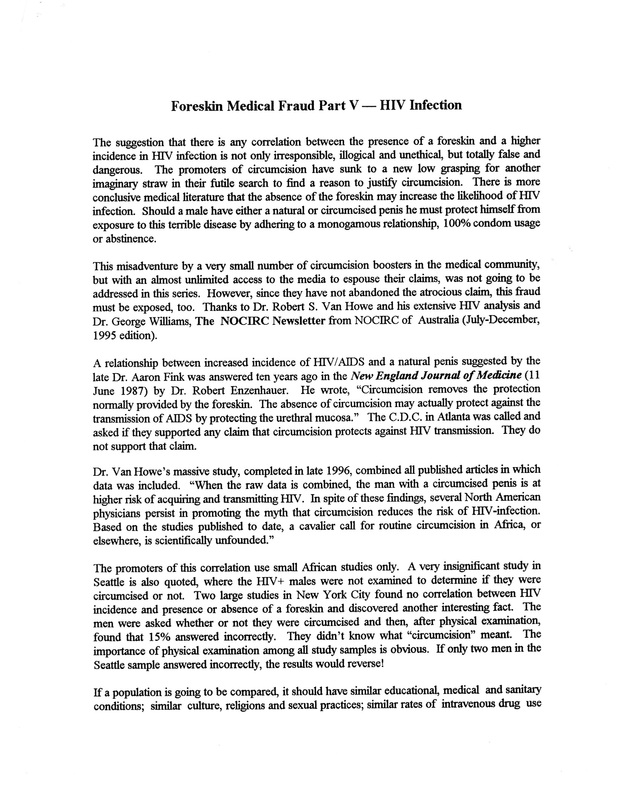 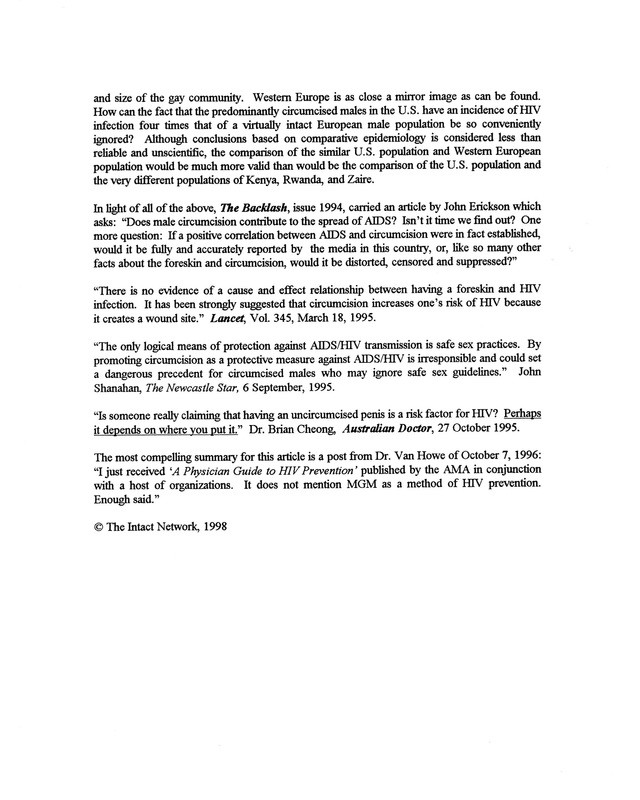 In 2005, R.Y. Stallings found that HIV rates were significantly lower in circumcised women.  If these studies are truly about preventing HIV, and circumcision is a legitimate preventative measure, why is female circumcision not promoted as male circumcision is?  Because it is a violation of human rights and people recognize that in regards to females.  However, they are looking for justification to continue circumcising males.  That is also why studies showing a lower incidence of HIV in intact males are not widely publicized.  Only studies that indicate their desired results are promoted.

Looking closely at the interaction of HIV and Langerhans cells, they found that the cells "do not become infected by HIV-1, because the cells have the protein Langerin on their cell surface," Geijtenbeek said. "Langerin captures HIV-1 very efficiently, and this Langerin-bound HIV-1 is taken up (a bit like eating) by the Langerhans cells and destroyed."


From Don't Get Stuck With HIV - Circumcised vs intact men living with HIV infection ...

From these data, circumcision seems, for example, to raise men’s risk for HIV in Rwanda and Malawi, but to lower their risk in Kenya and Tanzania.  Because that doesn’t make much sense, it’s reasonable to conclude that other factors have a much bigger influence on men’s risk to get HIV than whether they are circumcised or intact.


From Impact of male circumcision on HIV doubted ...

Researchers Gregory J. Boyle and Gregory Hill claimed the 60 percent reduction in transmission was only relative with the absolute reduction rate actually no more than 1.3 percent.


From More than Foreskin:  Circumcision Status, History of HIV/STI, and Sexual Risk in a Clinic-Based Sample of Men in Puerto Rico ...

These analyses represent the first assessment of the association between circumcision and STI/HIV among men in the Caribbean. While preliminary, the data indicate that in and of itself, circumcision did not confer significant protective benefit against STI/HIV infection. Findings suggest the need to apply caution in the use of circumcision as an HIV prevention strategy, particularly in settings where more effective combinations of interventions have yet to be fully implemented.


Also see Langerin is a natural barrier to HIV-1 transmission by Langerhans cells. 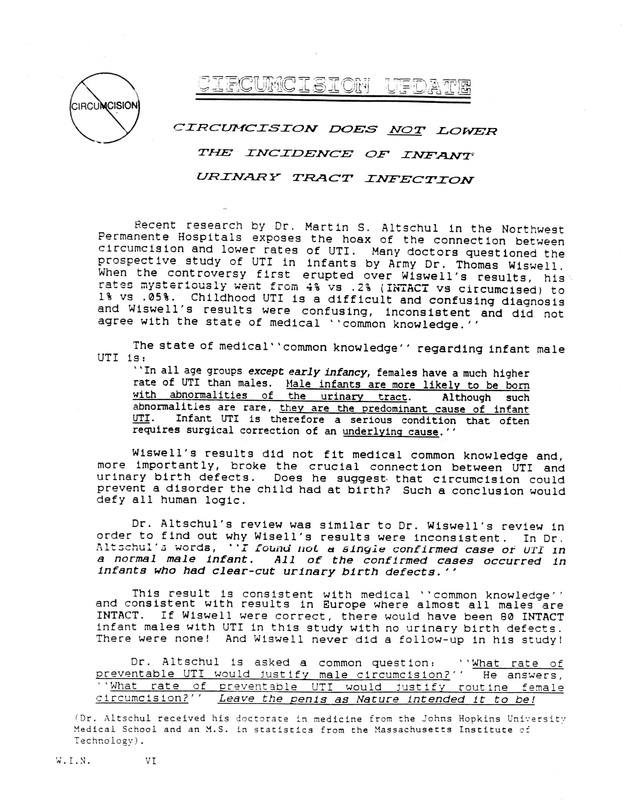 CIRCUMCISION UPDATE: Circumcision Does Not Lower The Incidence of Infant Urinary Tract Infection

Once we returned to England, I marched into the Surgery and demanded to see the Doctor. They gave me an appointment and three days later I walked in the Doctor's surgery  wanting to pounce on him. My precious baby needed to be cut. I told him everything that happened, and how he had an infection, and was on antibiotics, etc. The doctor probably seeing how hysterical I was, asked me to get Gus on the table so he could examined him.

He then explained to me that it wasn't pus, it was just fat deposits coming off. He then explained how the foreskin protects the penis and the baby from getting UTI's. He was extremely patient with me. I even asked him then if we needed to retract, because a doctor in Tampa told us to do so. He was horrified. The doctor's exact words were: Would you retract your dog or cat?

I have to say that I was livid that my precious boy was given medicine for something he didn't have. And he's never had an UTI, he's never had problems with being an intact baby, since we have educated ourselves.


Oftentimes the male foreskin is blamed for yeast infections in women.

From Yeasts and circumcision in the male ...

The fact that the yeast isolation rate was the same in both circumcised and uncircumcised men suggests that the presence or absence of the prepuce has no effect on the carriage of yeasts on the penis....It is interesting that men carrying yeasts have significantly fewer symptoms if circumcised, although the carriage rate in the two groups is the same.  It could be claimed that asymptomatic, circumcised carriers are very likely to be overlooked as a potential source of infection to women. 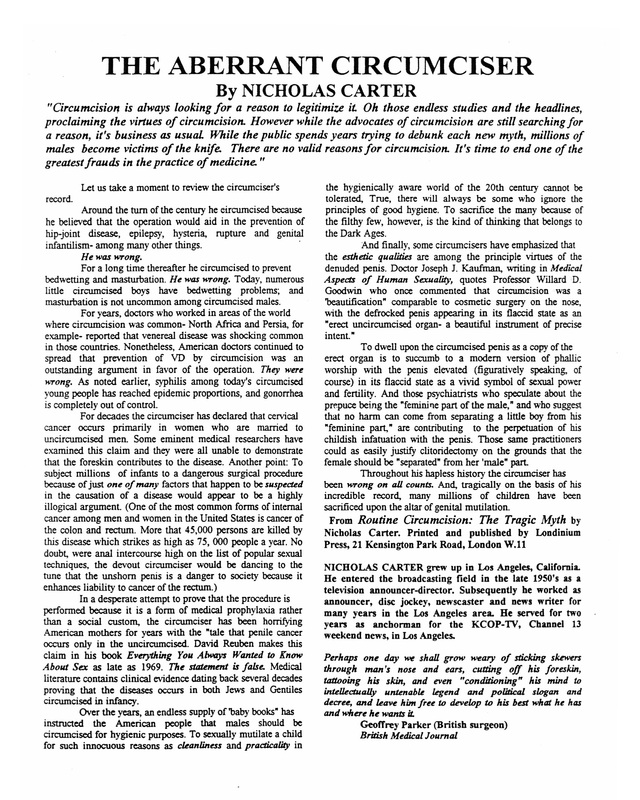 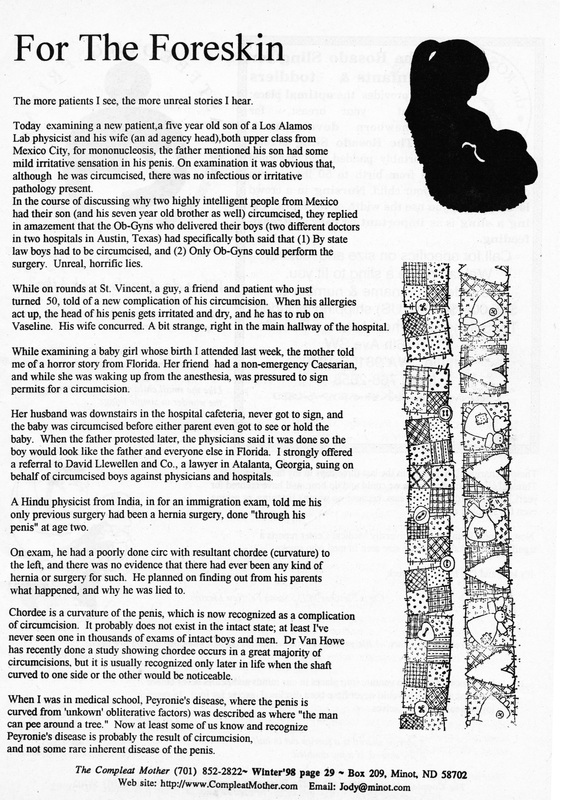