This page is a collection of articles written for, and mostly by medical professionals, calling for the end of routine infant circumcision.

It is a shame that in the United States, so many medical professionals, the ones who should know the most, know nothing about the function of the foreskin or the harm of circumcision.  Anatomy text books frequently show a circumcised penis as though it is the natural, normal form, and instead of medical school teaching the function and preservation of the foreskin, students are simply taught to remove it.  It is not like that in most of the world.  The men still have their foreskins and problems with it are virtually unheard of even in old age.

What European doctors say in response to the AAP's recent statement on circumcision (In English on page 7) Full English translation at Intact America ...

The American Academy of Pediatrics (AAP) recently released its new technical report and policy statement on male circumcision, concluding that current evidence indicates that the health benefits of newborn male circumcision outweigh the risks. The technical report is based on the scrutiny of a large number of complex scientific articles. Therefore, while striving for objectivity, the conclusions drawn by the eight task force members reflect what these individual doctors perceived as trustworthy evidence. Seen from the outside, cultural bias reflecting the normality of non-therapeutic male circumcision in the US seems obvious, and the report’s conclusions are different from those reached by doctors in other parts of the Western world, including Europe, Canada, and Australia. In this commentary, a quite different view is presented by non-US-based doctors and representatives of general medical associations and societies for pediatrics, pediatric surgery and pediatric urology in Northern Europe. To these authors, there is but one of the arguments put forward by the AAP that has some theoretical relevance in relation to infant male circumcision, namely the possible protection against urinary tract infections in infant boys, which can be easily treated with antibiotics without tissue loss. The other claimed health benefits, including protection against HIV/AIDS, genital herpes, genital warts and penile cancer, are questionable, weak and likely to have little public health relevance in a Western context, and do not represent compelling reasons for surgery before boys are old enough to decide for themselves.

Circumcision conflicts with children’s rights and doctors’ oath and can have serious long-term consequences, state an international group of 38 physicians from 16 European countries in Pediatrics today.


From A Case Against Circumcision ...

Sure enough, as it turns out, it’s the intern’s responsibility to wake up sleeping newborns, strap them down to a board that looks not unlike the electric chair (called a “circumstraint”), clamp their unanesthetized foreskins with the sterilized Gomco or Mogen instrument, and cut away the foreskins from the tips of the poor baby penises while they scream bloody murder, turn beet red, and pee in your face. I hated it. It was just awful.

The nurses would line them up, one after the other -- then, after wrapping their little post-operative pee-pees in Vaseline gauze, I would deliver them back to their Mommies. The whole time, I wanted to say, “Do you know what you just made me do to your son?”

Before doing the procedure, I always had the Mommy sign a consent form that basically says that this procedure is completely unnecessary, that it’s purely cosmetic, and that the baby might bleed, get infected, or have its penis accidentally lopped off. And they would sign away on the dotted line without blinking. It baffled me.


From Nurses Speak Out Against Circumcision ...

Circumcision became so intolerable that five of us wrote a letter saying that ethically we could no longer assist.  When we were getting ready to present the letter, other nurses came out of the woodwork and asked to sign it. Out of about 50 nurses, 24 signed it.


From Swedish docs in circumcision protest ...

"We consider it to be an assault on these boys," Staffan Janson, chairman of BLF's committee for ethical issues and childrens' rights, said to newspaper Göteborgs-Posten (GP).

"It's a mutilation of a child unable to decide for himself."


From Why I Am Against Circumcision - One Nurse’s Tale ...

All this time later, I still have flashes of that time. I cannot see it all as a clear sequence of events. I believe that is my mind's way of dealing with the trauma of it. I remember telling people about this experience and how much it disturbed me, but as time went by I pushed it to the back of my mind. Although, every time I ever saw anything on television or written about circumcision, I would remember this experience and my horror and sadness about it. This experience cemented in my mind that I will NEVER have a son circumcised, if I ever have the blessing of bringing one into the world.


From They Cut Off the Very Best Part ...

This is not an easy message. What mother wants to hear her baby is going to suffer needlessly? What man wants to hear he was strapped down, tortured, mutilated, and the most sensitive part of his penis was thrown into the trash can? Nobody wants to hear that. What doctor wants to admit he’s done this for no medical reason? I was very alone during those early days, giving out information that most people didn’t want to hear. By the way, it’s gotten a lot easier. 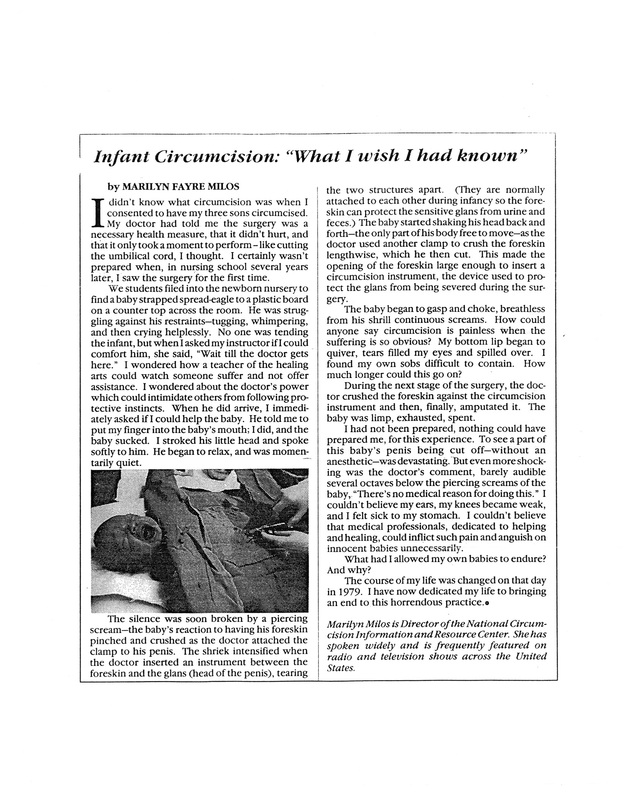 Infant Circumcision: "What I Wish I Had Known" 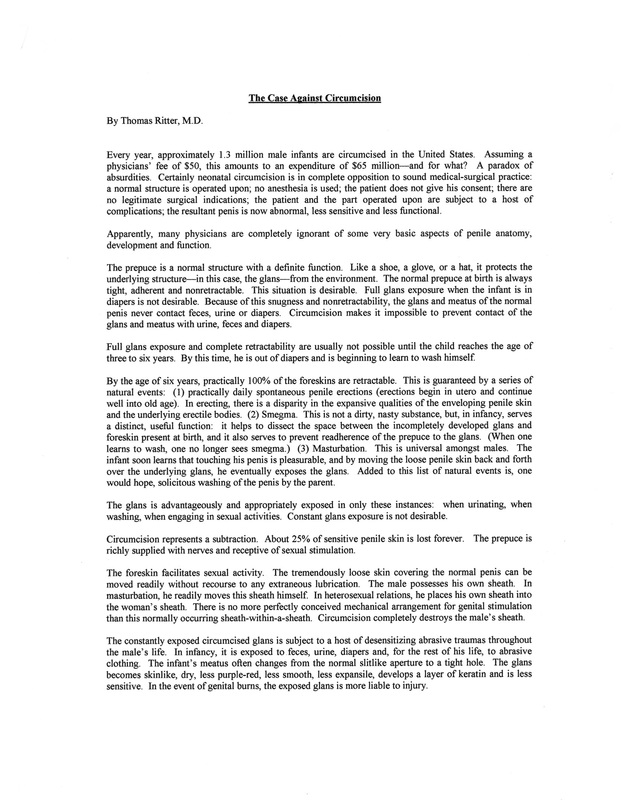 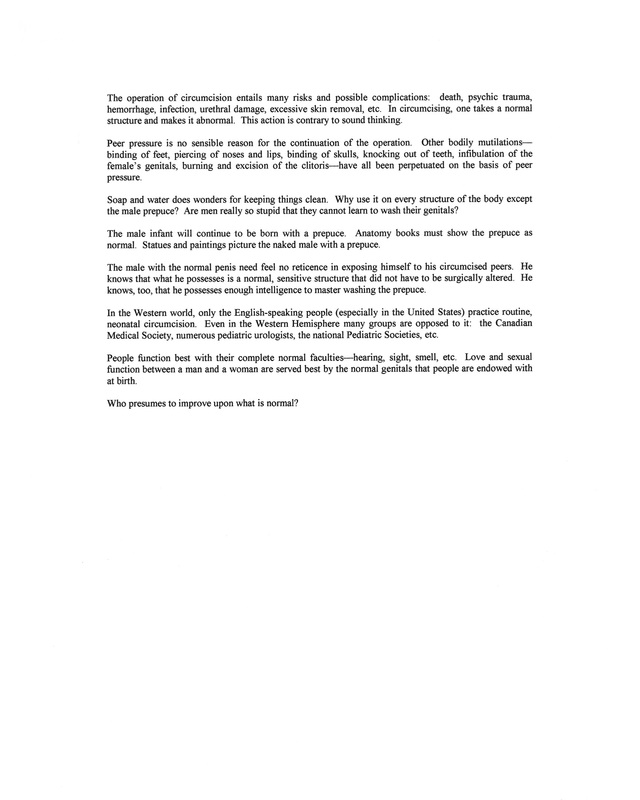 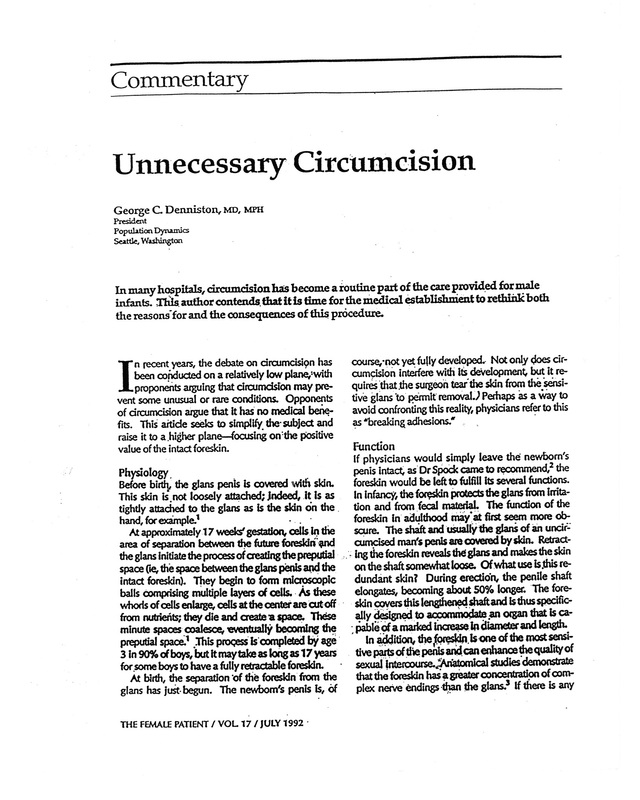 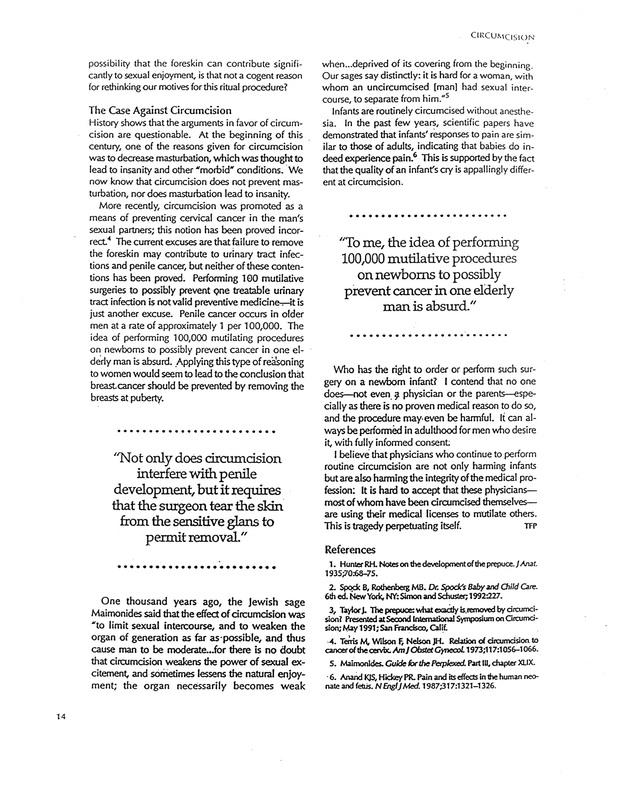 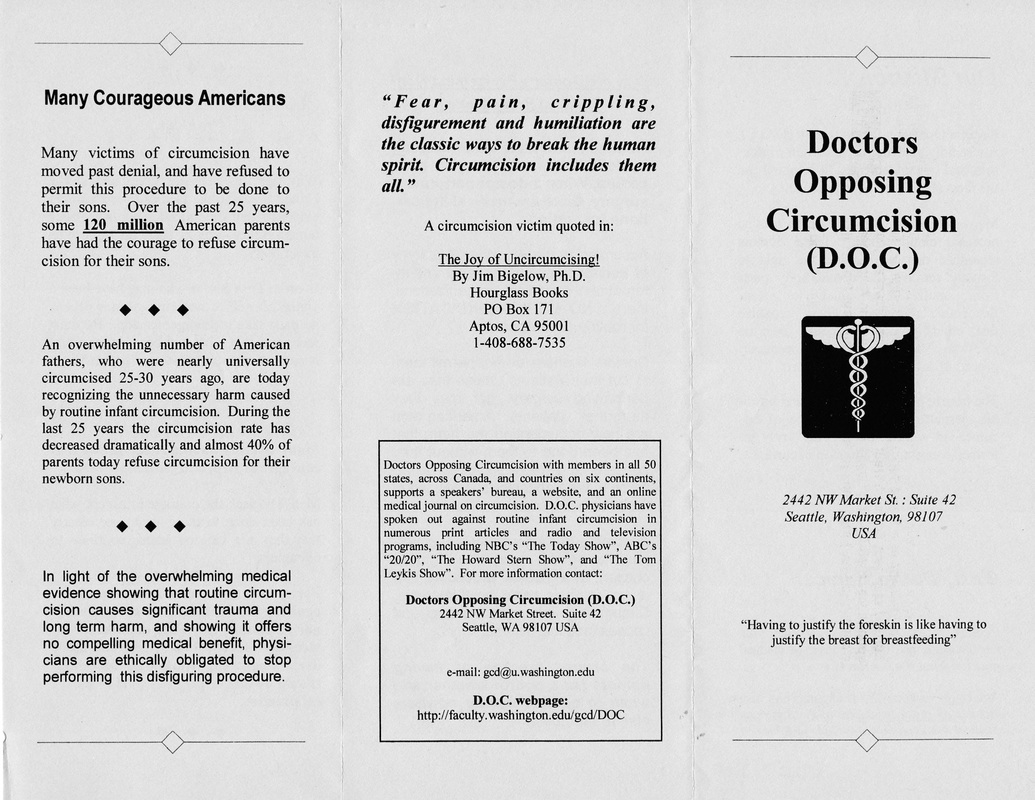 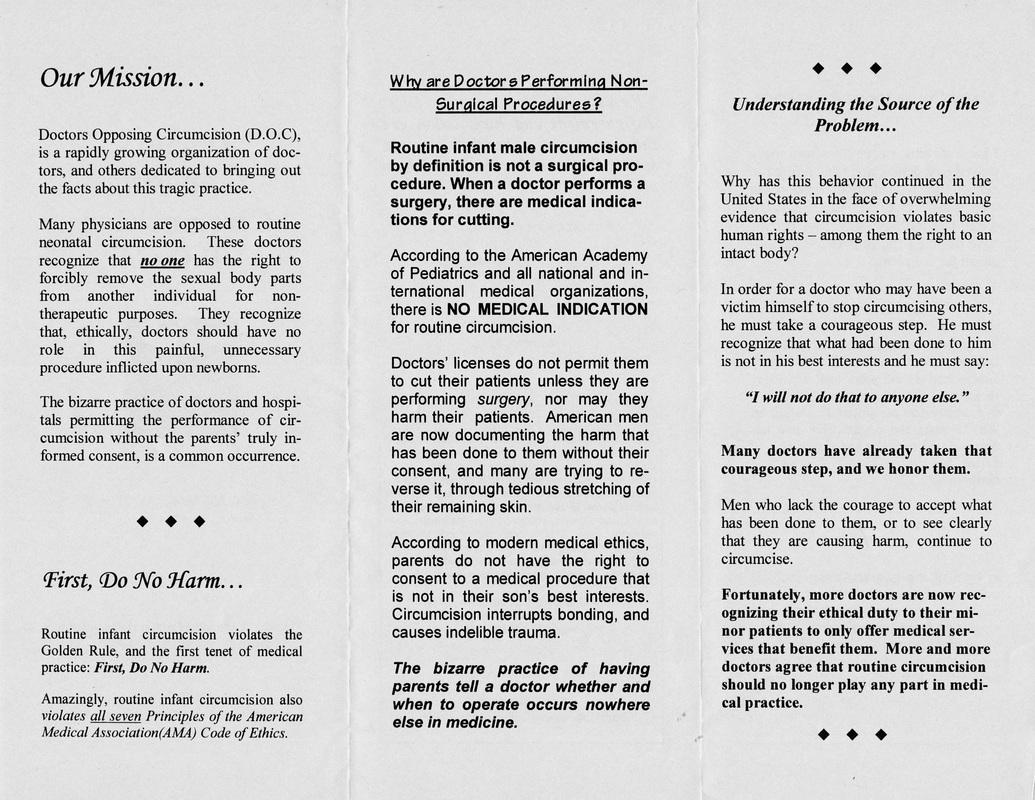 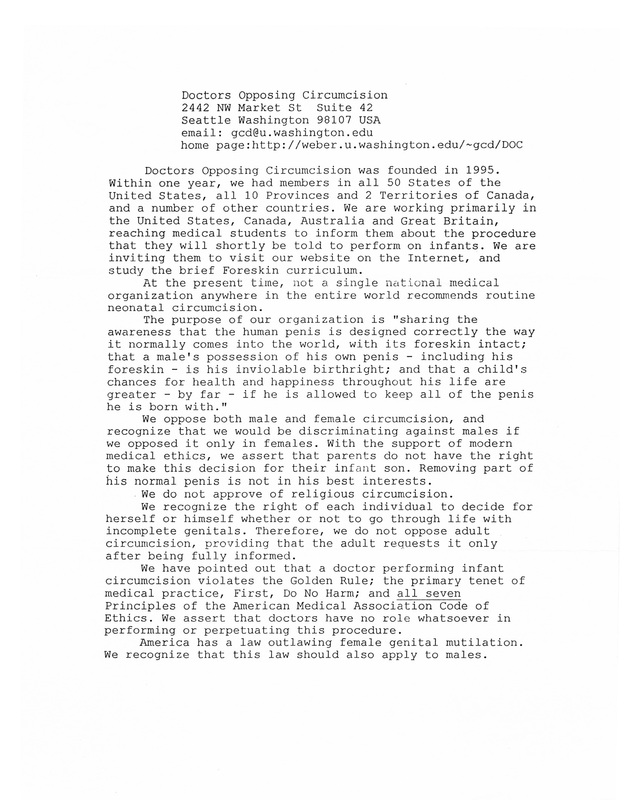 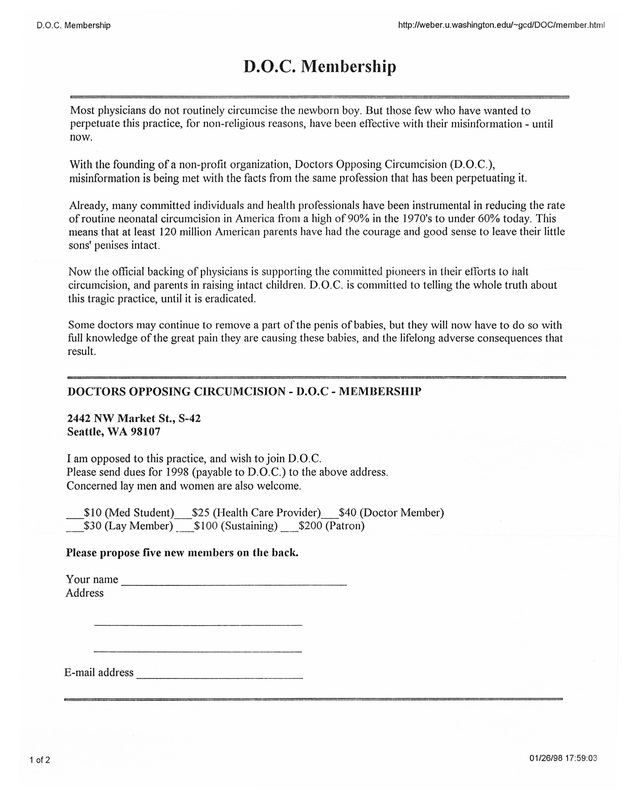 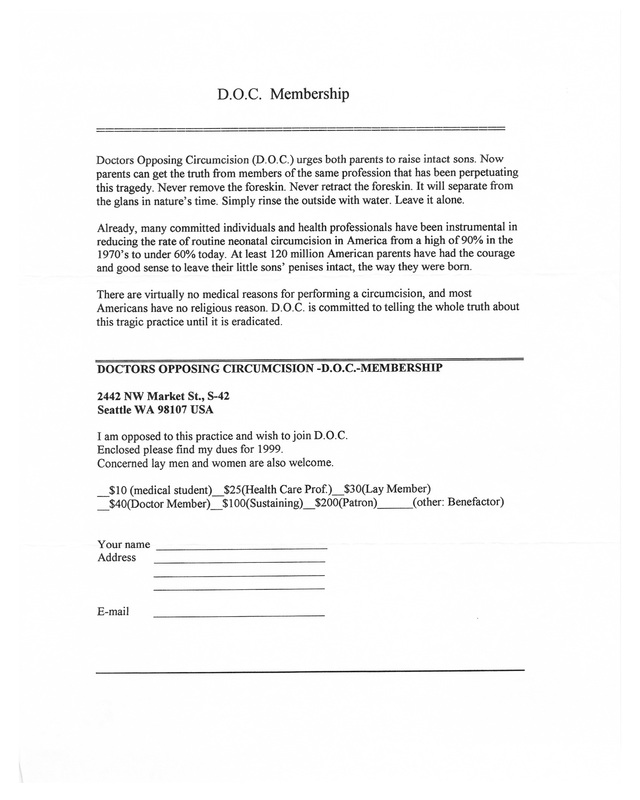 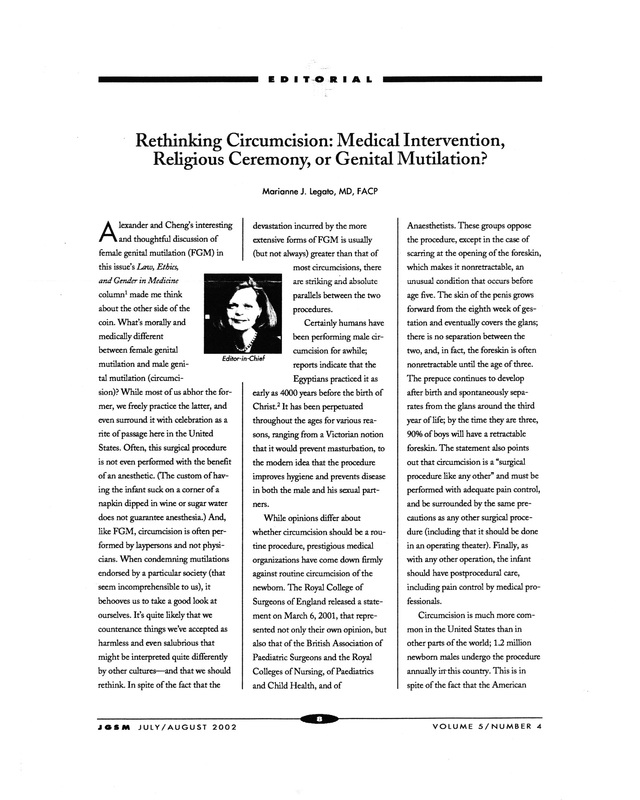 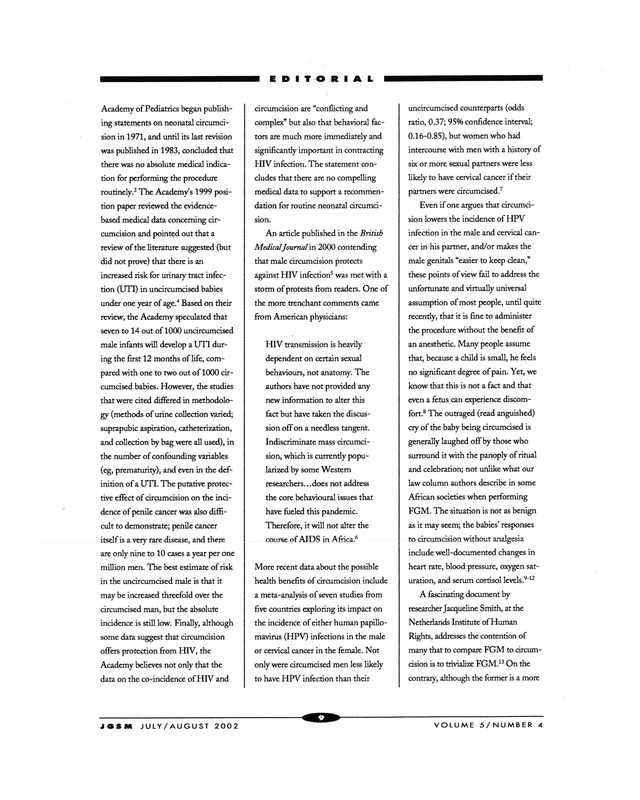 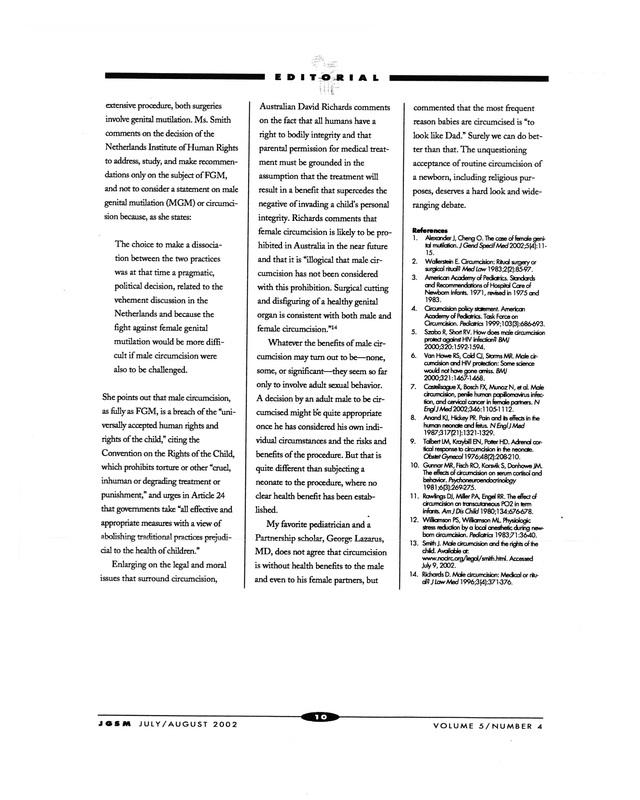 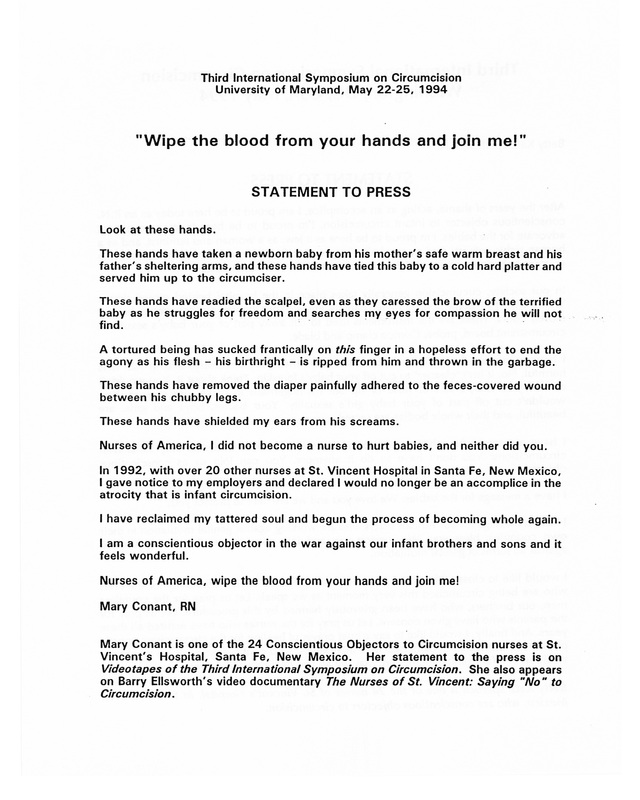 Look at These Hands 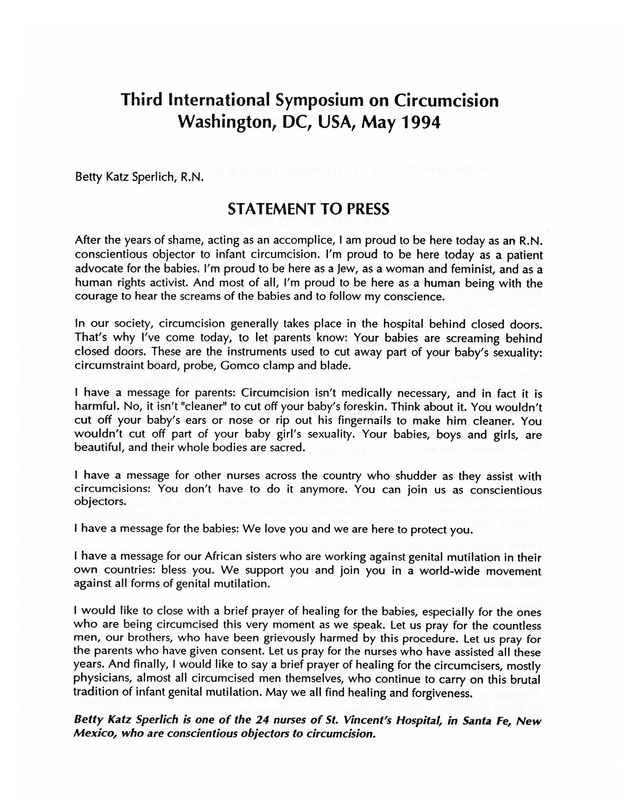 "We love you and we are here to protect you" 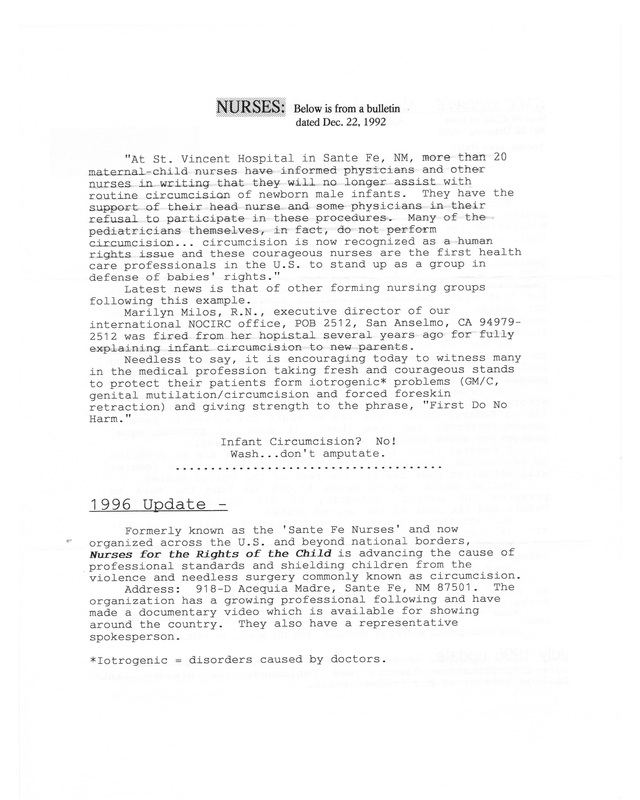 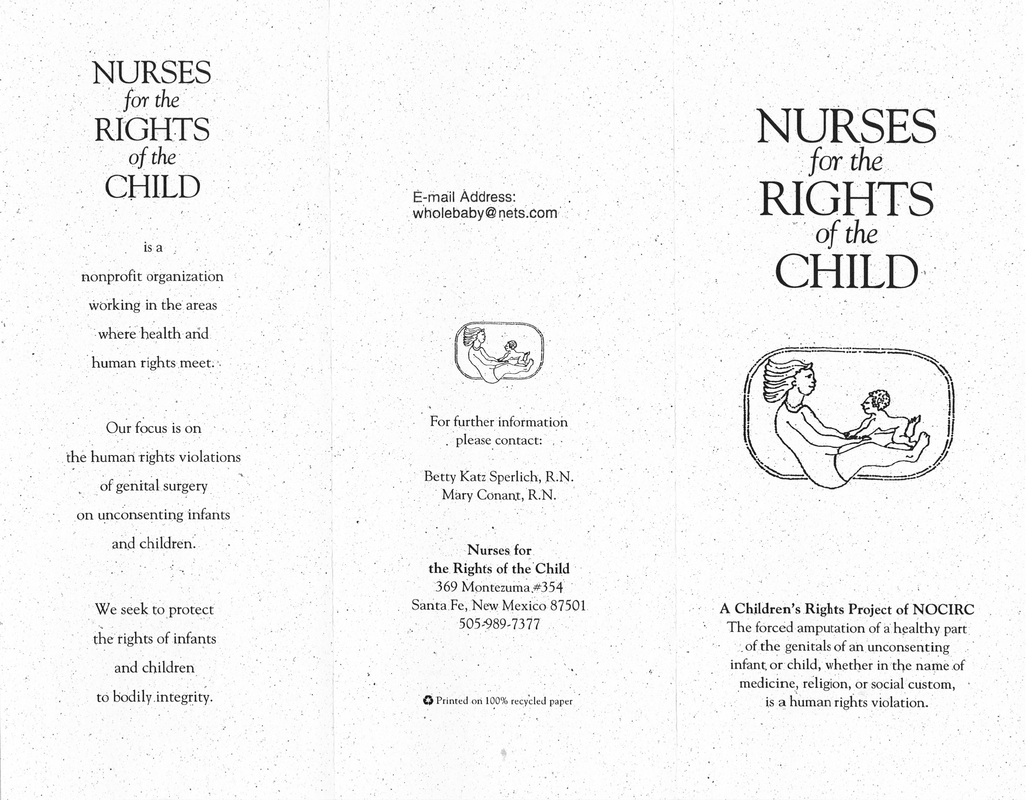 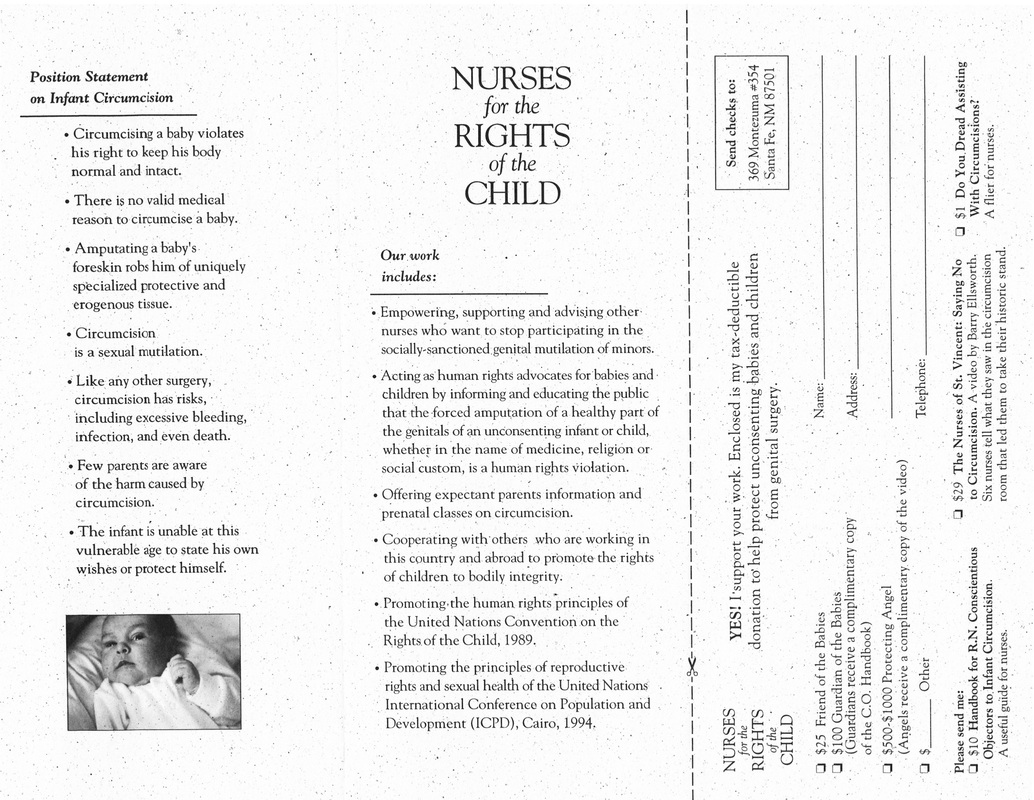 NURSES for the RIGHTS of the CHILD 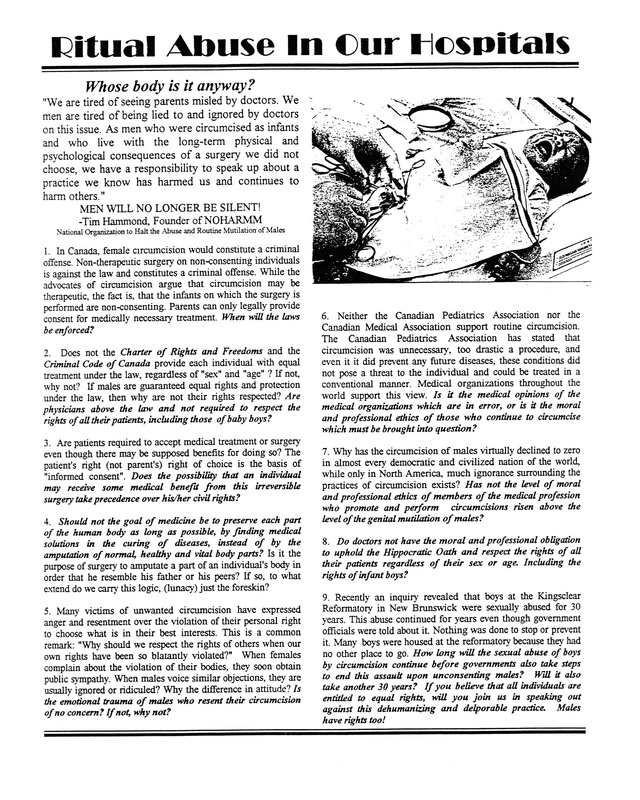 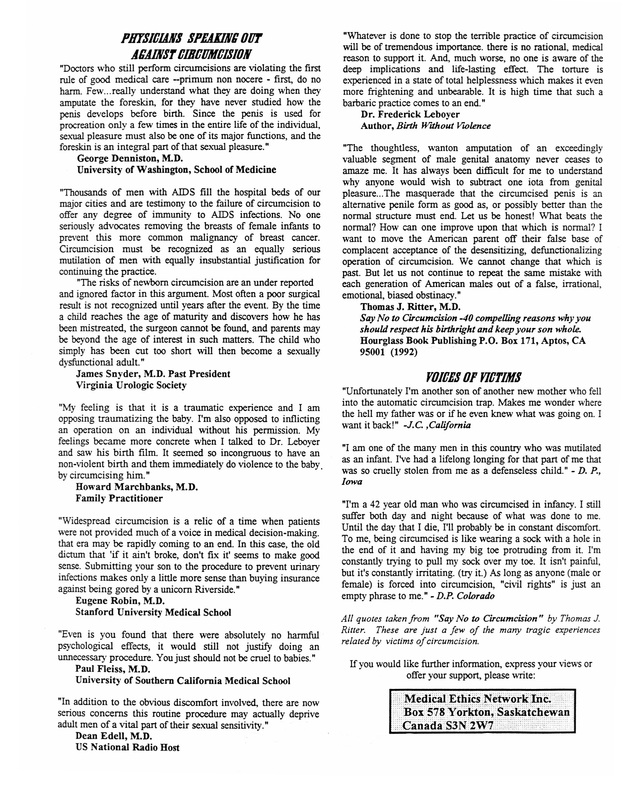 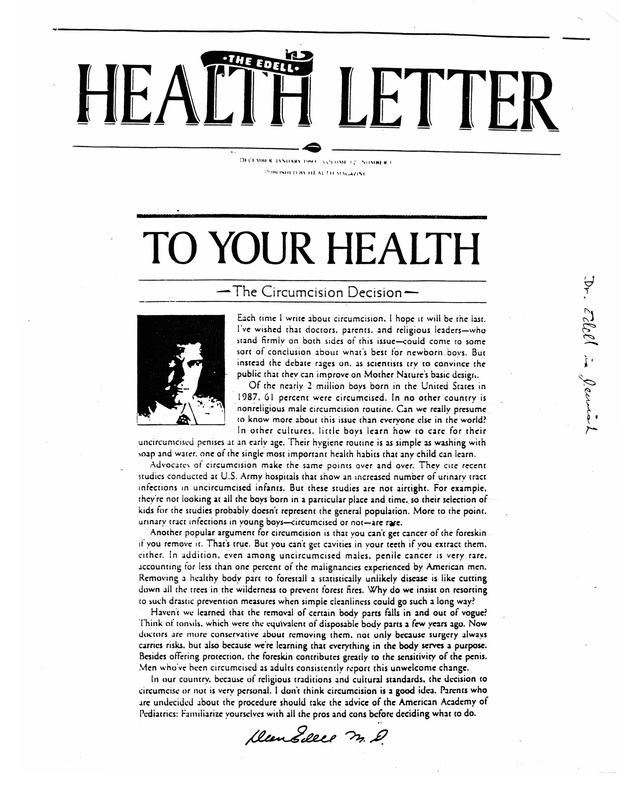 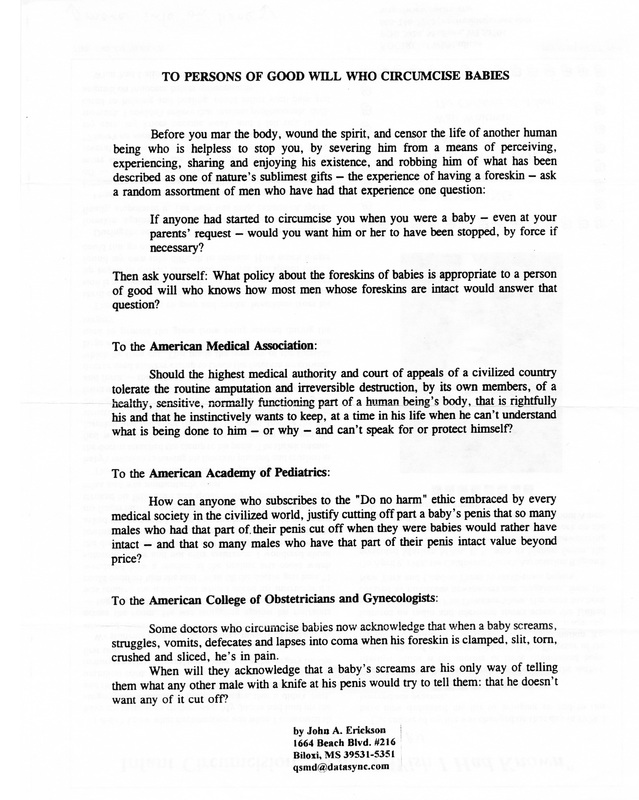 To Persons of Good Will Who Circumcise Babies 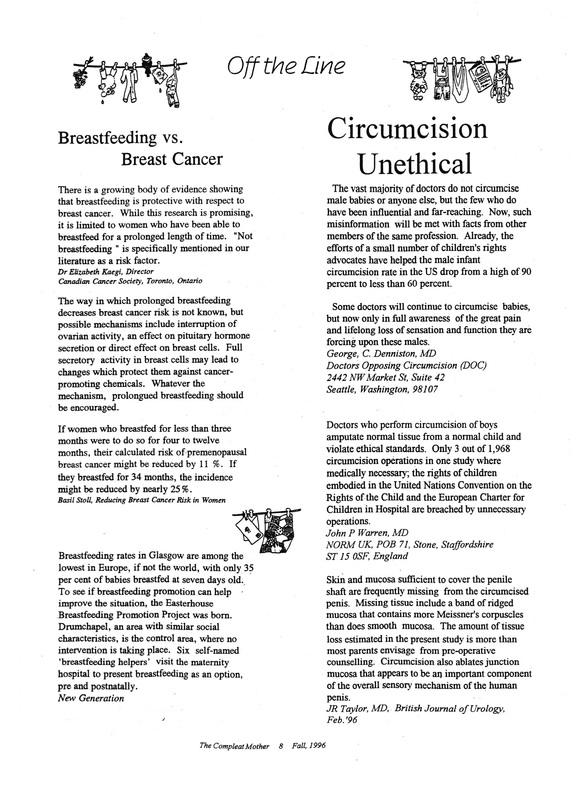